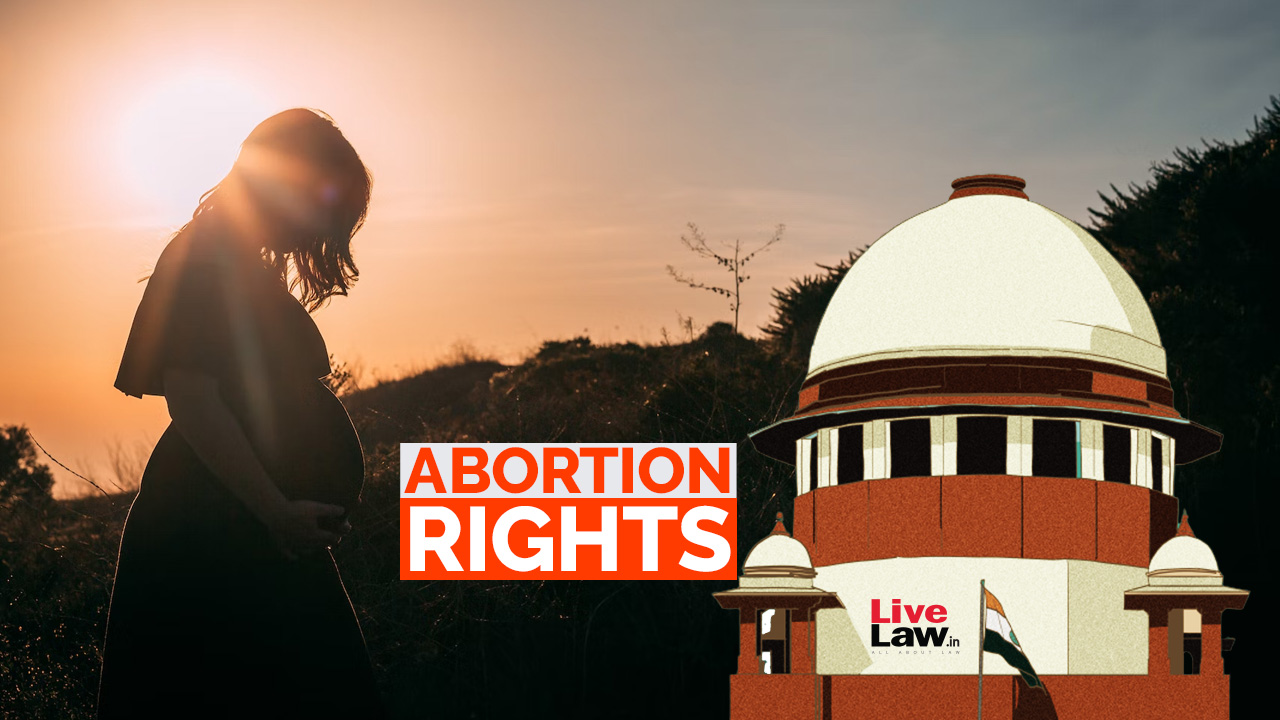 In a significant judgment, the Supreme Court on Thursday declared that unmarried women are also entitled to seek abortion of pregnancy in the term of 20-24 weeks arising out of a consensual relationship.The Court ruled that exclusion of unmarried women who conceive out of live-in relationship from the Medical Termination of Pregnancy Rules is unconstitutional."All women are entitled to safe...

In a significant judgment, the Supreme Court on Thursday declared that unmarried women are also entitled to seek abortion of pregnancy in the term of 20-24 weeks arising out of a consensual relationship.

The Court ruled that exclusion of unmarried women who conceive out of live-in relationship from the Medical Termination of Pregnancy Rules is unconstitutional.

"All women are entitled to safe and legal abortion", the Court said noting that the 2021 amendment to the Medical Termination of Pregnancy Act does not make a distinction between married and unmarried women.

The issue relates to whether the exclusion of unmarried woman, whose pregnancy arises out of consensual relationship, from Rule 3B of the Medical Termination of Pregnancy Rules is valid. Rule 3B mentions the categories of woman whose pregnancy in the duration of 20-24 weeks can be terminated.

"If Rule 3B(c) is understood as only for married women, it would perpetuate the stereotype that only married women indulge in sexual activities.This is not constitutionally sustainable.The artificial distinction between married and unmarried women cannot be sustained. Women must have autonomy to have free exercise of these rights", Justice Chandrachud, the presiding judge of the bench, read out the excerpts of the judgment.

"The rights of reproductive autonomy give an unmarried women similar rights as a married women", the Court added. The object of section 3(2)(b) of the MTP Act is in allowing woman to undergo abortion after 20-24 weeks. Therefore, including only married and excluding unmarried woman will be violative of Article 14 of the Constitution.

The foetus relies on the woman's body to sustain. Therefore, the decision to terminate is firmly rooted in their right of bodily autonomy. If the State forces a woman to carry an unwanted pregnancy to the full term, it will amount to an affront to her dignity.

A Bench comprising Justices D.Y. Chandrachud, A.S. Bopanna and J.B. Pardiwala had reserved judgment in the case on August 23.

Law must be interpreted keeping in mind changing social mores

When the MTP Act was enacted in 1971, it was largely concerning the married woman. But as societal norms and mores change, law must also adapt. Changing social mores must be borne in mind while interpreting provisions. Societal realities indicates the need to recognise legally non-traditional family structures.

After the judgment was pronounced, a lawyer informed the bench that today happens to be the international safe abortion day.

"I had no idea that this would coincide with safe abortion day. Thank you for informing us", Justice Chandrachud remarked.

Which are the categories of women included in Rule 3B?

The categories of women mentioned in Rule 3B of the MTP Rules framed by the Central Government are :

(a) survivors of sexual assault or rape or incest;

(c) change of marital status during the ongoing pregnancy (widowhood and divorce);

(d) women with physical disabilities [major disability as per criteria laid down under the Rights of Persons with Disabilities Act, 2016 (49 of 2016)];

(f) the foetal malformation that has substantial risk of being incompatible with life or if the child is born it may suffer from such physical or mental abnormalities to be seriously handicapped; and

(g) women with pregnancy in humanitarian settings or disaster or emergency situations as may be declared by the Government.

These categories were added in the MTP Rules by the Central Government following the 2021 amendment to the MTP Act, which raised the ceiling limit for termination of pregnancy.

The case arose when a 25 year old unmarried woman approached the Delhi High Court seeking termination of her pregnancy of 23 weeks and 5 days stating that her pregnancy arose out of a consensual relationship, however, she could not give birth to the child as she was an unmarried woman and her partner had refused to marry her. However, a division bench of Delhi High Court comprising Chief Justice Satish Chandra Sharma and Justice Subramonium Prasad refused interim relief to her. The High Court observed that unmarried women, whose pregnancy arose out of a consensual relationship, was not covered by any of the Clauses under the Medical Termination of Pregnancy Rules, 2003.

She then approached the Supreme Court which, on 21st July, 2022 passed an ad-interim order allowing her to abort her pregnancy subject to a medical board constituted by the AIIMS Delhi concluding that the foetus could be aborted without risk to the life of the woman.

The Supreme Court bench was of the view that the Delhi High Court had taken an "unduly restrictive view" inasmuch as Rule 3(b) speaks of "change in marital status" of woman, followed by expressions widowhood or divorce. It held that expression "change in marital status" must be given a "purposive interpretation". The bench comprising Justices DY Chandrachud, Surya Kant and AS Bopanna took into account the amendments made to the Medical Termination of Pregnancy Act in 2021 which substituted the word "husband" in Explanation 1 to Section 3(2) of the Act with the word "partner" and observed that excluding unmarried women and single women from the ambit of the statute goes against the purpose of the legislation. The order stated–

"There is no basis to deny unmarried women the right to medically terminate the pregnancy, when the same choice is available to other categories of women."

On the above premises, the Court had concluded that the petitioner's case prima facie falls within the ambit of the Act.

Also from the judgment : Rape Includes "Marital Rape" For The Purposes Of MTP Act, Wife Conceiving Out Of Forced Sex Can Seek Abortion : Supreme Court