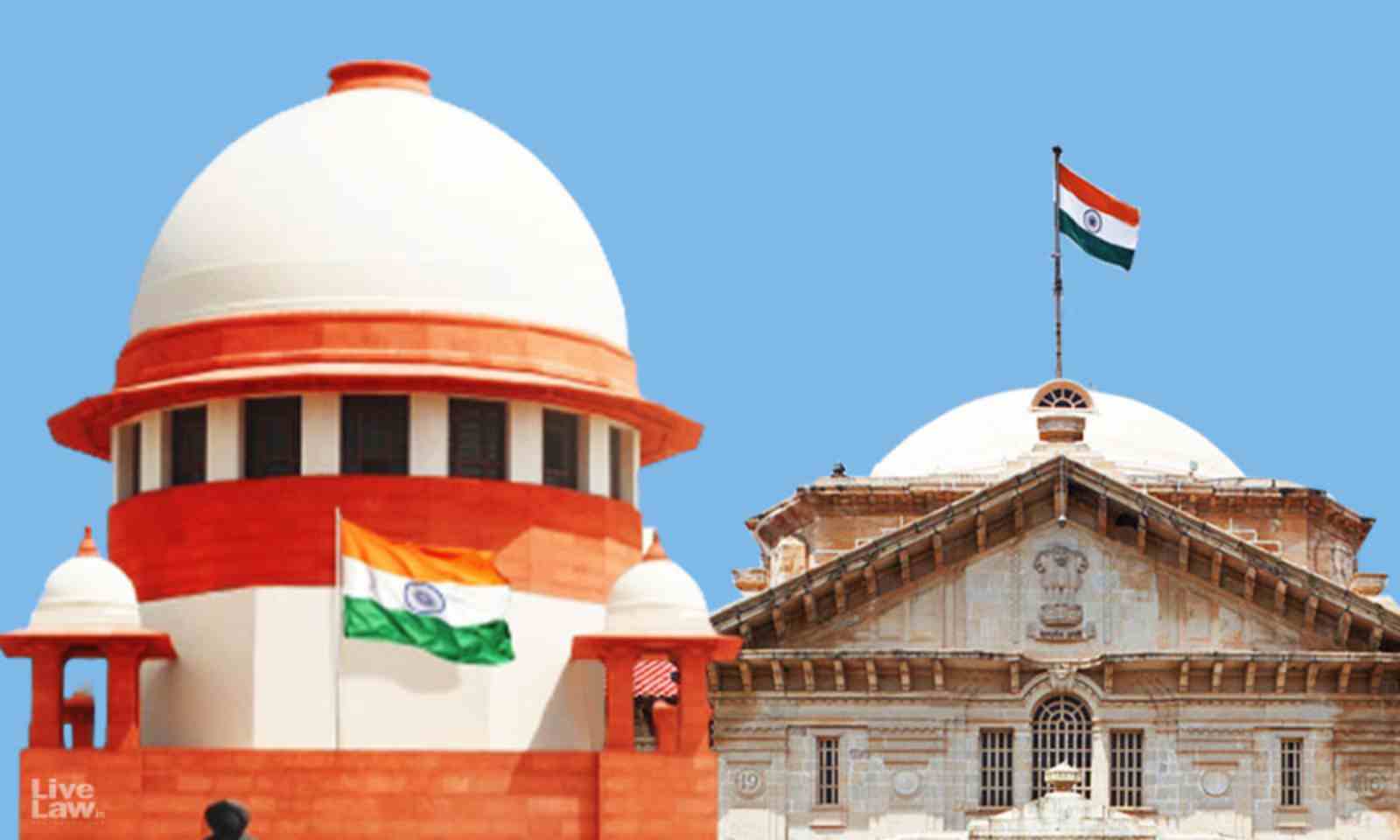 Expressing concern about the long pendency of criminal appeals before the Allahabad High Court, the Supreme Court, on Friday laid down some broad parameters that can be adopted by the High Court while granting bail.The Court ordered : "A list should be prepared for the ones who have served more than 14 years and is not a repeat offender. In all these cases there is a high possibility...

Expressing concern about the long pendency of criminal appeals before the Allahabad High Court, the Supreme Court, on Friday laid down some broad parameters that can be adopted by the High Court while granting bail.

"A list should be prepared for the ones who have served more than 14 years and is not a repeat offender. In all these cases there is a high possibility that if they are released they may not be interested to also pursue their appeals.

The second category can be one where people have served more than 10 years and in one go bail can be granted."

A Bench comprising Justices Sanjay Kishan Kaul and M.M. Sundresh expressed disappointment in the manner the bail applications for accused who have been in custody for 10-17 years have been dealt with in the State of Uttar Pradesh.

On a previous occasion the Bench had asked the High Court and the U.P. Government to chalk out a plan and accordingly issue directions to meet the exigencies of the situation. Considering the length of period of custody, the Bench lamented that the criminal justice system neglects the reformation and approach the concerns of the prisoners from only a punitive perspective.

"The Allahabad High Court has to do some thinking. Bail is rejected after 11 years stating heinous crime. Of course crime is heinous, but is no reformative approach possible?

If later the appeal is allowed, who is going to give back the years lost…We do not bother about the reformative part, we look at them from a punitive perspective only."

On perusal of the status report filed by the Allahabad High Court in compliance of its order, the Bench stated that, it appeared that in the 18 matters remitted to the High Court for bail, the Counsels for the accused on all the three occasions did not press the matter to be taken on board.

"We have a report of the High Court which seems to suggest that there are 18 matters remitted to High Court for consideration of bail were listed on 15th, 16th and 17th Nov, 2021 and the appearances were not put in on behalf of appellants. Despite the matter being listed in the roster bench, none appeared to press the matter to be taken up on board."

Advocate, Mr. Nikhil Goel, appearing for the High Court submitted that the affidavit was filed on 15.11.2021 and sought the Court's permission to file a fresh affidavit as some changes have taken place in the interim.

"This affidavit was filed on 15th November, and we are now on 25th Feb. Since then in respect to these 18 matters, one has been disposed off, in one judgment has been reserved, in one accused is not found to be in custody. The lawyers have not appeared despite being on record. I may be permitted to file an updated status. These matters have been listed for an average of 6 times in the last 4 months."

The Bench granted permission for the same -

"The Counsel appearing for the High Court seeks to file an updated status report. He states that some matters have been dealt with while in other matters none appears for the accused."

The Bench acknowledged that there was nothing to bar the State from considering the case of remission for the prisoners who have served 14 years of sentence.

"The problem is aggravated by the fact that people do not appear in appeal. What have you done for UP prisoners release on probation rules? If someone has already put in 14 years nothing stops you from releasing them irrespective of the pendency of appeal", Justice Kaul orally remarked.

Senior Advocate, Ms. Garima Prasad appearing for the State of U.P. agreed that there is no bar to consider such cases for remission.

It was pointed out that the High Court and the State Government should coordinate to see that cases eligible for remission are automatically considered.

"There must be coordination between the State Government and High Court to see cases which are pending and have crossed the requirement for consideration by the State Govt. for bail. A system has to be developed to see that these cases are automatically considered. Some of these prisoners do not have the wherewithal to know what is happening. This is a concern we have", Justice Kaul said.

Advocate, Mr. Upadhyay, appearing for one of the accused, submitted that he had been in custody for 17 years and his bail was rejected because of the unpreparedness of the advocate before the High Court.

The Bench was perturbed to note that even after serving 17 years in prison, the accused was refused bail only because of the unpreparedness of the Advocate representing them.

"Mr. Goel, see this is the problem, I can understand the anxiety that people should not be on bail, get out on bail and not argue the appeal. Let us say his appeal is dismissed. But, he has served his sentence. I feel this approach is wrong. Suppose somebody has served 8 years and wants to get out on bail. Court says you don't argue the appeal, you are not entitled to bail. I agree. But, if someone has served 17 years, should he suffer for the lawyer's unpreparedness?"

The Bench recorded in the order that anybody who had served 14 years of sentence, their case should be put up before the Board to consider for prohibition. Accordingly, it directed both the State and the High Court to prepare a list -

"We have also emphasised to the Ld. Counsel for state in reference to our observation on the last date about consideration of cases under the U.P. Prisons Release on Probation Rules, 1938. Anybody who has served 14 years of sentence, the case has to be put before the Board to be examined as per the norms. It is not appropriate that those cases lie before the High Court with sentences much beyond 14 years being served without being considered for release in terms of the policy. We call upon the High Court and State Government to prepare a list of such cases where the accused has already undergone 14 years of sentence and for one reason or the other appeal has not been heard even if it is for the fault of the lawyer. Those cases be put before the Board for release. It is also possible that some of these cases once the accused is released, they may not be prosecuting the appeal also. List with suo moto petition.

There may be cases where for whatever reason the lawyer may not be present but if they have already completed 14 years of sentence, the State itself should take appropriate stand and the Ld. Judge can pass appropriate orders to examine those cases for release. The absence of advocates cannot come in the way in such scenario."

The Bench highlighted that though the norm is not to grant bail when the appeal is being considered, there needs to be an exception for the prisoners who have served 14 years of the sentence, simply, because to not grant them bail would amount to travesty of justice.

"In this other case the accused has been in prison for 17 years and bail plea was rejected by HC. Since counsel was not prepared the plea was rejected and thereafter 4 times the plea was not taken up even when counsel was ready. In our view, there is apparently a misconception that if the court is ready to hear the appeal the bail applications should not be considered. This should be normally true, yet counsels cannot get away with unpreparedness to argue. The caveat will be when the accused has served 14 years a different norm comes into play requiring the case to be considered. Thus to deny bail to such a person whose counsel does not argue and they have nothing to blame, would be travesty of justice. A copy of this order be placed before the CJ of Allahabad High Court."

The Bench told Mr. Goel and Ms. Prasad that after 14 years of being in custody, either the Court has to direct the remission case to be considered by the Government within a period of three months or direct the prisoner to be enlarged on bail

"You realise what we are trying to say? I understand the philosophy that people somehow only try to argue the bail and not the appeal. If he has served 14 or more than 14 years then his case is to be considered for remission. Either the Court directs that the remission be considered in three months or at least enlarge him on bail."

Though the Bench wanted the High Court to formulate the template, given the exigencies of the matter, the Bench noted that it was constrained to lay down some broad principles for granting bail in the State of Uttar Pradesh.

"We wanted the HC to formulate a template, but both of us are exasperated today so we did it. If somebody has completed 14 years in all cases, all cases can be taken up considering there is no repeat offender case and bail can be garnet and case for remission be considered."