"Had Union Minister Not Made Alleged Utterances Threatening Farmers, Lakhimpur Kheri Violence Might Not Have Happened": Allahabad HC Denies Bail To 4 Accused 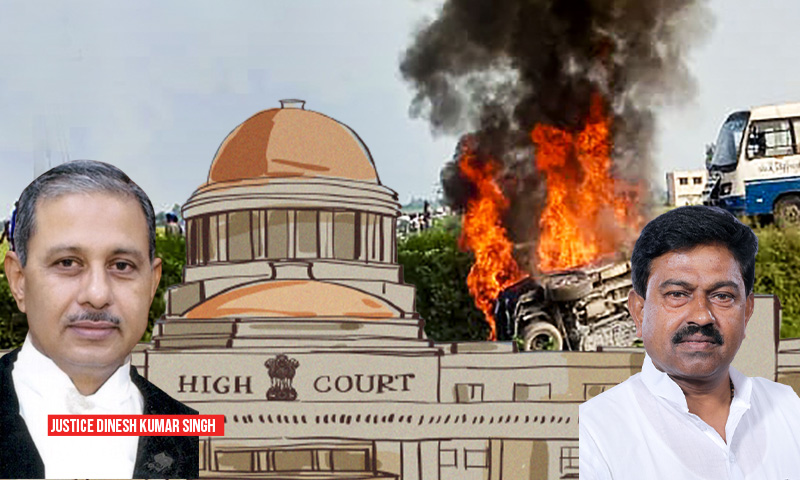 Denying bail to 4 prime accused in the Lakhimpur Kheri Violence incident, the Allahabad High Court today observed that incident might not have taken place if the Union Minister of State for Home had not made alleged utterances threatening farmers to chase them away from District Kheri.

The Court also found it intriguing as to why the wrestling competition was organized when Section 144 Cr.P.C. was imposed in the area and why did Union Minister of State for Home Ajay Mishra Teni and the Deputy Chief Minister, Keshav Prasad Maurya decided to be present as Chief Guest etc. in the event.

Stressing that the lawmakers cannot be seen to be law violators, the court called it unbelieve that it would not have been within the knowledge of the Deputy Chief Minister of the State that in the area provisions of Section 144 Cr.P.C. were clamped and, any assembly or gathering was prohibited.

Significantly, the Court lauded the efforts of the Special Investigation Team for carrying out free, fair, impartial and scientific investigation of the offence. With this, the Bench noted that the charge sheet disclosed overwhelming evidence against the accused-applicant and co-accused for commission of the offence, which has been termed cruel, diabolic, brutal, barbaric, depraved, gruesome and inhumane.

Allegations leveled against the Accused

It is said that some supporters of Ashish Mishra @ Monu, who were traveling by Car to the wrestling venue, were attacked by certain farmers. The mirrors of their vehicles were smashed. A hoarding board displaying pictures of Ajay Mishra and accused, Ashish Mishra was also damaged and therefore, Ashira Mishra conspired with his aides and confidants and decided to teach the protesting farmers a lesson.

It was also alleged that he and his aides armed with weapons, left the wrestling competition venue in vehicles as mentioned in the FIR and drove at a very high speed towards the Maharaja Agrasen Inter College, where the protesting farmers were returning to their homes.

Importantly, in the counter affidavit filed on behalf of the State, it was specifically stated that the farmers were agitating in a most peaceful manner and their protest was neither violent nor unruly as alleged on behalf of the accused applicant.

Against the backdrop, the Court noted that since the accused-applicant and the main accused, Ashish Mishra @ Monu belong to very influential political families and therefore, the court observed that the apprehension of the prosecution them interfering with the course of justice, tampering with the evidence and influencing the witnesses, cannot be ruled out at this stage and consequently, the bail plea of all the 4 accused have been dismissed.

Holding that the High Court passed the order taking into account irrelevant considerations and denying the right of hearing to the victim, the Court set aside the bail order and asked Mishra to surrender within a week.

The bail application has been remanded back to the High Court for a fresh decision on merits after taking note of relevant considerations and after affording right of hearing to the victim. His bail plea is currently pending before the Court.

The Bench of Justice Rajiv Singh had earlier granted bail to Mishra on February 10, noting that there was a possibility that the driver (of Thar) had tried to speed up the vehicle to save himself, on account of which, the incident had taken place.

Now, on March 16, the Supreme Court had issued a notice in the matter, and on April 4, it had reserved orders on the plea to set aside the bail granted to Ashish Mishra in the Lakhimpur Kheri case.

On April 4, in a significant observation, the Court had told the State of Uttar Pradesh that it ought to have filed an appeal against the bail order as recommended by the judge monitoring the Special Investigation Team.

"We expected state to act on suggestion of the SIT", the bench orally told the State. The State, while saying that the offence was grave, added that Mishra was not a flight risk and that the witnesses have been given adequate protection.

It may be noted that on April 18, the Supreme Court had set aside the Allahabad High Court order granting bail granted to Ashish Mishra. Holding that the High Court passed the order taking into account irrelevant considerations and denying the right of hearing to the victim, the Court set aside the bail order and asked Mishra to surrender within a week.

In the order to cancel Mishra's bail in the case, the Supreme Court had expressed its disappointment at the Allahabad High Court for refusing to hear the victims of the case before granting him bail.

The Court also made a critical comment about the "tearing hurry" shown by the High Court in granting bail. The Top Court noted that the High Court ought to have acknowledged the rights of the victims to participate in the hearings of the bail pleas of the accused. The close relatives of the farmers who got killed in the Lakhimpur Kheri violence had sought to intervene in the bail application filed by Mishra before the High Court. However, their lawyers could not make effective submissions as they got disconnected during the virtual hearing. Though they filed an application for re-hearing, the High Court did not consider it.

Regarding the approach of the High Court to deal with the bail application, the Supreme Court noted :

"...we are constrained to express our disappointment with the manner in which the High Court has failed to acknowledge the right of the victims. It is worth mentioning that, the complainant in FIR No. 219 of 2021, as well as the present Appellants, are close relatives of the farmers who have lost their lives in the incident dated 03.10.2021. The specific stance taken by learned Senior Counsel for the Appellants that the Counsel for the 'victims' had got disconnected from the online proceedings and could not make effective submissions before the High Court has not been controverted by the Respondents. Thereafter, an application seeking a rehearing on the ground that the 'victims' could not participate in the proceedings was also moved but it appears that the same was not considered by the High Court while granting bail to the Respondent­Accused".

The bail application was also remanded back to the High Court for a fresh decision on merits after taking note of relevant considerations and after affording the right of hearing to the victim.

Now, today, when the matter came up before the Bench, the bench recused itself from hearing the case, now the matter will go to the Chief Justice of the Allahabad High Court for the constitution of a fresh bench to hear the matter.