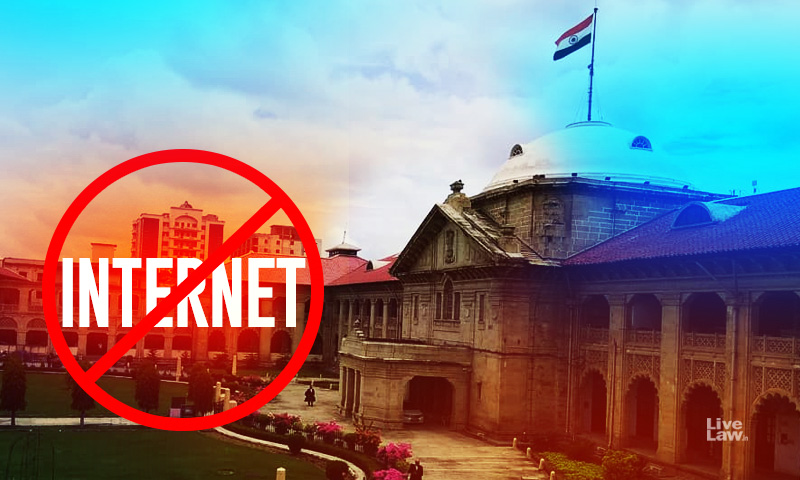 The Allahabad High Court has registered a suo moto Public Interest Litigation on the issue of internet shutdowns in Uttar Pradesh. Internet was suspended in several parts of UP following the state wide prohibitory orders issued under Section 144 CrPC over CAA protests.

A division bench comprising Chief Justice Govind Mathur and Justice Vivek Verma directed the Registry on December 20 to register a PIL in the name ""Reference to the discontinuation of Internet services by the State Authorities".

This was after a group of lawyers led by Senior Advocates Ravi Kiran Jain, Anurag Khanna and Sri Rakesh Pande mentioned before the Chief Justice the problems faced by the lawyers as well as by the public due to internet shutdowns. They pointed out that internet shut down had affected the judicial system. As the publication and distribution of cause list, uploading and downloading of orders and several other activities are dependent on the internet services, the stoppage of the same has paralyzed judicial system, the lawyers submitted.

The lawyers further pointed out that that apart from judicial system, banking activities, administrative activities, educational activities, medical activities, traffic movement by Railways, Airways or Road have become disrupted due to internet shutdown.

"The right to have continuous internet services in the present era is an extension of the right to live and, as such, discrimination of that is in violation of Article 21 of the Constitution of India", the lawyers submitted.

"Where each and every activity of life is dependent to the Internet services, the Administration must adopt some other mode and methods to meet with different eventualities pertaining to the law and order issues", they added.

The matter was ordered to be listed today. It will be considered on January 6. Notice has been served on the UP Government.

Last month, Gauhati High Court had ordered the restoration of mobile internet services, which were disconnected in wake of anti-CAA protests.

The Delhi HC had last month dismissed a PIL filed against orders issued by Police for internet shutdown during CAA protests.