Breaking: Apprehension Of Death On Account Of Covid19 Pandemic Is A Valid Ground For Grant Of Anticipatory Bail: Allahabad High Court 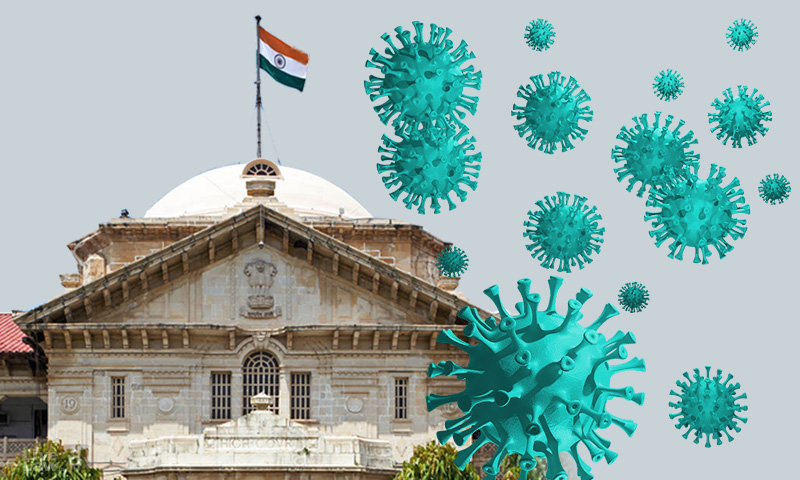 In a very important decision concerning the right to life of persons accused of committing a criminal offence, the Allahabad High Court on Monday observed that apprehension of death on account of reasons like the present pandemic is a valid ground for grant of anticipatory bail. The order has been passed by a Single Bench of Justice Siddharth in view the inadequate medical facilities...

In a very important decision concerning the right to life of persons accused of committing a criminal offence, the Allahabad High Court on Monday observed that apprehension of death on account of reasons like the present pandemic is a valid ground for grant of anticipatory bail.

The order has been passed by a Single Bench of Justice Siddharth in view the inadequate medical facilities in the State, that may leave the accused persons unprotected from the threat to their life on account of arrest as per the normal procedure applicable in normal times.

The Single Bench was hearing the anticipatory bail application seek of one Prateek Jain, apprehending death on account of probable arrest in connection to a case of cheating and fraud.

He observed that the established parameters for grant of anticipatory bail like the nature and gravity of accusation, the criminal antecedent of the applicant, the possibility of fleeing from justice and whether accusation has been made for injuring and humiliating the applicant by getting him arrested have now lost significance on account of present situation of the country and the State on account of spread of second wave of novel corona virus.

"The law is a dynamic concept and it is required to be interpreted as per the requirements of time. With the change in the requirements of time, the interpretation and application of law is required to be adopted with change. The law of anticipatory bail is founded only on the apprehension of arrest. The apprehension may be of pre-recording or post-recording stage of the FIR. However, the pre-requisite condition of apprehension of arrest is survival of the accused," the Bench observed.

Justice Siddharth has held that the right to life guaranteed under Article 21 of the Constitution is paramount and by mere implication in a case of alleged commission of non-bailable offence, the right to life of an accused person cannot be put to peril.

"The allegations may be serious against an accused but the presumption of innocence in his favour cannot be dispelled only on the basis of the allegation," he said.

He emphasized that it is only when the accused would be alive he would be subjected to the normal procedure of law of arrest, bail and trial.

The Single Judge referred to the case of Kerala Union of Working Journalists v. Union of India & Ors. where the Supreme Court recently held that the fundamental right to life unconditionally embraces even an undertrial.

He noted that in this case, the Apex Court showed concern about overcrowding of jails and thus, ignoring the same by declining the instant plea for pre-arrest bail would be quite paradoxical.

Accused may get infected in prison system

The Judge observed that the second wave of novel corona virus has given rise to apprehension of death of an accused.

If he is arrested and subjected to the subsequent procedures of detention in lock-up, production before the Magistrate, grant or rejection of bail or incarceration in jail, etc., the apprehension to his life will certainly arise.

"During the compliance of procedures provided under Cr.P.C. or any special act, an accused will definitely come in contact with number of persons. He will be arrested by police, confined in lock-up, produced before the Magistrate and if his bail application is not granted promptly, he will be sent to jail for an indefinite period till his bail is granted by the Higher Court.

The accused may be suffering from the deadly infections of corona virus, or police personnels, who have arrested him, kept him in lock-up, produced him before the Magistrate and then took him to jail may also be infected persons. Even in jail large number of inmates have been found to be infected. There is no proper testing, treatment and care of the persons confined in jails," the Bench observed.

It stated that even in cases where the police report has been submitted under Section 173(2) CrPC and summons/ warrants have been issued against him, such an accused is also required to be protected till the threat of novel corona virus to his life is minimized or eradicated and normal functioning of the Courts are restored.

"The experts are of the view that the third wave is likely to come in the month of September, 2021 and it is uncertain when the normal functioning of the Court would be restored. In such uncertain times it would be against the requirement of Article 14 of the constitution of India, which provides equality before law and equal protection of law, to leave an accused unprotected from arrest and suffer the consequences of being infected with novel corona virus.

The conventional and well settled grounds for grant of anticipatory bail to an accused implicated for alleged commission of non-bailable offence can be considered after the normal conditions in the society and the courts are restored then the anticipatory bail application of the accused persons shall be considered on ordinary parameters like in ordinary times," the High Court has held.