UP Ordinance On Conversion Is Nothing But Criminalization Of Inter-Faith Marriages : Petitioner's Rejoinder In Allahabad High Court 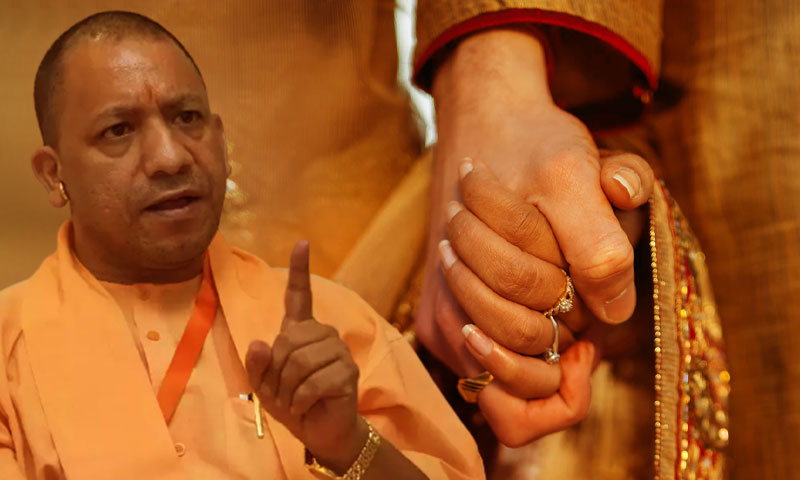 "If a person exercises the freedom under Article 25 of the Constitution to marry somebody of his or her choice, and in that process, one partner chooses to change their religion immediately prior to marriage, that should not be the matter of concern for the State of any Social Watchdogs," submitted a writ petitioner before the Allahabad High Court, in a batch of PILs challenging...

"If a person exercises the freedom under Article 25 of the Constitution to marry somebody of his or her choice, and in that process, one partner chooses to change their religion immediately prior to marriage, that should not be the matter of concern for the State of any Social Watchdogs," submitted a writ petitioner before the Allahabad High Court, in a batch of PILs challenging the constitutional validity of the UP Government's controversial Ordinance on religious conversions.

Last week, the Government had defended the law stating that it is aimed at preventing any form of unlawful conversion actuated by elements of misrepresentation, force, undue influence, coercion, allurement, by marriage, etc.

The Government had also cited conversion of faith by a Hindu person after marriage with a Muslim person as an example of forceful conversion arguing that conversion is not out of choice but due to intervention of personal law. Such conversion is done out of compulsion as personal law treats such inter-religious marriage as invalid, the State had claimed.

Religious Conversion For Marriage Not Exercise Of Choice When It Is Due To Compulsion Of Personal Law: UP Govt Defends 'Love Jihad' Ordinance

"The impugned Ordinance is nothing but legal sanction to the criminalization of inter-faith marriages. It is a direct assault on Article 21 of the Constitution which guarantees personal liberty and the right to life."

The matter is listed for hearing before a Division Bench led by Chief Justice Govind Mathur tomorrow, i.e. January 18. In a related development, the Allahabad High Court pronounced a verdict last week to take away mandatory publication of notice under the Special Marriage Act, making it easier for couples to register marriage under the special law without fear of intervention by vigilante groups.

Referring to the Preamble of the impugned Ordinance, the Petitioner has submitted that the law equates marriage with misrepresentation, force, undue influence, coercion, allurement and fraudulent means. Amongst other things, he submitted, it seeks to prohibit what it calls 'unlawful conversion by marriage'.

Resisting this, the Petitioner submitted,

"The state's concern about forcible conversions is understandable as it could involve several crimes, such as wrongful confinement (Section 342 IPC), intimidation (section 506 IPC), kidnapping (Section 359-369 IPC), assault (Section 352 IPC), threat of divine displeasure (Section 508 IPC) etc. But the fact remains that there are enough laws on the statute book that are adequate to convict those accused of the crime or tackle coercive conversion."

He has also objected to the proviso to Section 3 of the impugned ordinance inasmuch as it lays down that "reconversion" to a person's previous religion is not illegal, even if it is vitiated by fraud, force, allurement, misrepresentation and so on.

"Through this peculiar provision, the law seems to contradict its own vicious theories of forceful conversions and breach of public order," the Petitioner submits.

The Petitioner contended that even if for the sake of argument, it is considered that the impugned ordinance is a shield to protect forceful conversions, even then such a law is "exceptionally discriminatory" for Indian women.

"In the framing of the "love jihad" narrative, Hindu women are only gullible victims, who have been made to stray away from the fold of their clan and community. They are not consenting adults free to make their own choices — good or bad. It is an idea that feeds the need of all patriarchal societies to control "sisters and daughters" — never independent women — and their sexuality," the affidavit states.

In its counter affidavit, the UP Government had declared that 'community interest is on a much higher pedestal than agreement of two individuals who enter into wedlock'.

The Petitioner has contended that this proposition overturns the spirit of the Constitution and implies that no two individuals can make a decision regarding their marriage partners without seeking the sanction of the community they are a part of.

"If a particular group or community declares that its sentiments have been hurt by a particular action, which is otherwise lawful, then this cannot be a pretext for abridging someone's legitimate exercise of right, on the plea that some community interest is thereby violated. Nor can a plea be advanced that the exercise of such right may, by hurting the 12 sentiments of a particular community or group, create a law and order problem and social unrest and hence its abridgement is justified.

It is the duty of the State to deal with such a law and order problem, and punish those who perpetrate such unlawful situations rather than turn on a law-abiding citizen. By no stretch of imagination could such community or social prejudice be elevated to the category of public interest," the affidavit states.

In its counter affidavit, the UP Government had the decision of a Division Bench of the Allahabad High Court in the Salamat Ansari case cannot be considered to be a good law and requires re-consideration.

Objecting to this contention, the Petitioner has submitted that judgment passed in Salamat Ansari case lays down a good law and is backed up by various judicial precedents and pronouncement of the Supreme Court, and it will wrong and misconceived to state that the said decision requires consideration.

Few cases that were referred to in the Salamat Ansari are:

The Petitioner has also relied on a landmark of the Supreme Court of the United States, in the case of Loving v. Virginia, which struck down laws banning 'inter-racial' marriage by a unanimous 9-0 decision, as being violative of personal autonomy and the Equal Protection Clause.

"The freedom to marry has long been recognized as one of the vital personal rights essential to the orderly pursuit of happiness by free men. Marriage is one of the "basic civil rights of man", fundamental to our very existence and survival. To deny this fundamental freedom on so unsupportable a basis as the racial classifications embodied in these statutes, classifications so directly subversive of the principle of equality at the heart of the Fourteenth Amendment, is surely to deprive all the State's citizens of liberty without due process of law," the Petitioner quoted the US Supreme Court.

In its counter affidavit, the UP Government had relied on the Supreme Court's judgment in Rev. Stainislaus v. State of Madhya Pradesh & Ors, AIR 1977 SC 908, where it upheld the constitutional validity of the MP and Odisha Anti-Conversion legislations.

In that case, the Supreme Court had held that the laws were meant to avoid disturbances to public order by prohibiting conversion from one religion to another 'in a manner reprehensible to the conscience of the community' and that 'forcible conversion could create public disorder'.

The Petitioner has submitted that the said case is different from the one at hand inasmuch as the M.P. and Odisha Acts were silent on inter-faith marriages and the Supreme Court too had not commented upon that.

No need to exercise Ordinance-making power

The UP Government had claimed that the rise in the cases of 'love jihad' or forced conversion for marriage was a compelling reason to exercise the Ordinance making power under article 213 of the Constitution.

The Petitioner has however pointed out that the UP Government failed to produce any statistics, facts or figures as an evidence of the compelling circumstances.

On the other hand, the Petitioner added, there is abundance of data against the proposition.

"The Special Investigation team of Kanpur police had submitted a report ruling out organized conspiracy behind the cases of inter-faith marriages which were put under scanner as most of the cases of Hindu-Muslim marriages turned out to be consensual," the Petitioner illustrated.

"There seems to be absolutely no data on 'love jihad' available with any government agency or department.

…no circumstances existed before the government which required the immediate action of promulgating an Ordinance by-passing the regular prescribed procedure of law making through the Legislature."

Aftermath of the Ordinance

The UP Government had claimed in its affidavit that it is wrong to label the impugned Ordinance as 'Love-Jihad Ordinance'. It had also claimed that ordinance didn't target any particular religion and was equally applicable to all forms of forced conversion, not just interfaith marriages.

The Petitioner has however contended a scrutiny of the statistics submitted by the Government in court presents an intriguing picture:

In its affidavit, the UP Government had challenged the maintainability of the writ petitions, stating that in a public interest litigation, High Courts cannot test the vires of a legislation. Reliance was placed on Supreme Court's decision in Guruvayoor Devaswom Managing Committee v. CK Rejan, 2003 (7) SCC.

The Petitioner has stated that the Government has wrongly interpreted the Guruvayoor Devaswom case (supra).

Reliance was placed on Bandhua Mukthi Morcha v. Union of India and Ors., [1984] 2 SCR 67, a judgment also quoted in the Guruvayoor Devaswom judgment, where it was held that,

"When the Court is prima facie satisfied about variation of any constitutional right of a group of people belonging to the disadvantaged category, it may not allow the State or the Government, from raising the question as to the maintainability of the petition."

The UP Government has claimed that the Petitioner does not have a locus standi to maintain the instant petition.

Responding to this, it is submitted in the rejoinder affidavit that a practising advocate is best suited to raise such issues of Constitutional importance before the Courts, as they are in a position to feel aggrieved and understand the gravity of the situation caused by a legislation which is not founded on principles enshrined under the Constitution. Moreover, it is a legal duty of an advocate to ensure that principles and values laid down by the Constitution should be protected and preserved at all costs, the affidavit states.

Reliance is placed on Hussainara Khatoon v. State of Bihar, 1979 AIR SC 1369, where a PIL was filed by an advocate on the basis of the news item, highlighting the plight of thousands of undertrial prisoners languishing in various jails in Bihar.

"These proceeding led to the release of more than 40,000 undertrial prisoners. Right to speedy justice emerged as a basic fundamental right which had been denied to these prisoners. The same set pattern was adopted in subsequent cases," the Petitioner said.