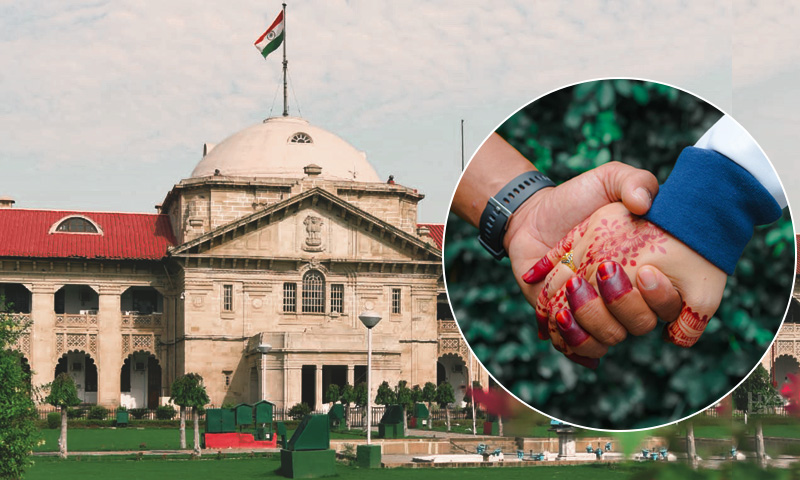 The Allahabad High Court on Wednesday asked the Petitioners challenging the constitutional validity of Uttar Pradesh Prohibition of Unlawful Religious Conversion Ordinance to withdraw their petitions as infructuous, as the Ordinance has been replaced with an Act.A Bench of Chief Justice Sanjay Yadav and Justice Siddhartha Varma refused to allow amendment applications and asked the...

The Allahabad High Court on Wednesday asked the Petitioners challenging the constitutional validity of Uttar Pradesh Prohibition of Unlawful Religious Conversion Ordinance to withdraw their petitions as infructuous, as the Ordinance has been replaced with an Act.

A Bench of Chief Justice Sanjay Yadav and Justice Siddhartha Varma refused to allow amendment applications and asked the Petitioners to file afresh.

"How can you amend the entire petition? We can only allow you to amend the prayer clause. Otherwise withdraw or we are dismissing this," CJ Yadav said at the outset.

Advocate Devesh Saxena, appearing for one of the Petitioners argued that there has not been any material change in their pleadings and only the word 'Ordinance' has been replaced with the word 'Act'.

"A lot of time will be wasted if we file afresh because arguments have already been led," Saxena submitted.

However, the Bench displayed its inclination to dismiss the pleas. "Your affidavit says you have filed an 'elaborated and exhaustive' petition. We are not going to allow this. Withdraw or we will dismiss," CJ Yadav told Saxena.

"It's elaborate because the word 'Ordinance' is appearing so many times. But there is no material change," Saxena insisted before finally withdrawing the petition with liberty to challenge the new Act.

All other petitions challenging the Ordinance have also been dismissed as withdrawn with liberty to file fresh petition challenging the Act. Those petitions that were filed after notification of the Act, have been granted time to file counter affidavits and rejoinders.

The Court has issued notice on a PIL filed by the Association for Advocacy and Legal Initiatives through Advocate Vrinda Grover, challenging the Act of 2021. It has directed that pleadings be completed in the case before the next date. The matter will be listed for arguments in the week commencing August 2nd, 2021.

It also heard petitions filed by Neeraj Kumar through Advocate Jagat Mohan Bind and by Advocate Shashank Tripathi (in person).

Notices were Court issued on the petitions on December 18, 2020.

The Act, passed in February this year, specifically criminalizes conversion by marriage.

Section 3 of the Act prohibits one person from converting the religion of another person by marriage. In another words, religious conversion by marriage is made unlawful. Violation of this provision is punishable with imprisonment for a term which is not less than one year but which may extend up to 5 years and a fine of minimum rupees fifteen thousand. If the person converted happens to be a woman, the punishment is double the normal term and fine.

The Petitioners have contended that the legislation is antithetical to the authoritative pronouncement of a Division Bench of the High Court in the Salamat Ansari case.

The UP Government claimed however that the Ordinance is equally applicable to all forms of forceful conversions and is not only confined to inter faith Marriages.

It also stated that the recent Division Bench judgment of the High Court in the Salamat Ansari case needs to reconsidered as it has not dealt with the question relating to inter-fundamental right and intra-fundamental rights as it has also skipped the attention of the Hon'ble Division Bench as to what will be the scope of liberty of an individual qua the societal interest.

The writ petitioners had also submitted that there was no emergent ground to exercise the ordinance making power under Article 213 of the Constitution and that the State failed to show any unforeseen or urgent situation to justify the law.

Earlier, the Supreme Court refused to entertain petitions against the law, asking the parties to approach the High Court.