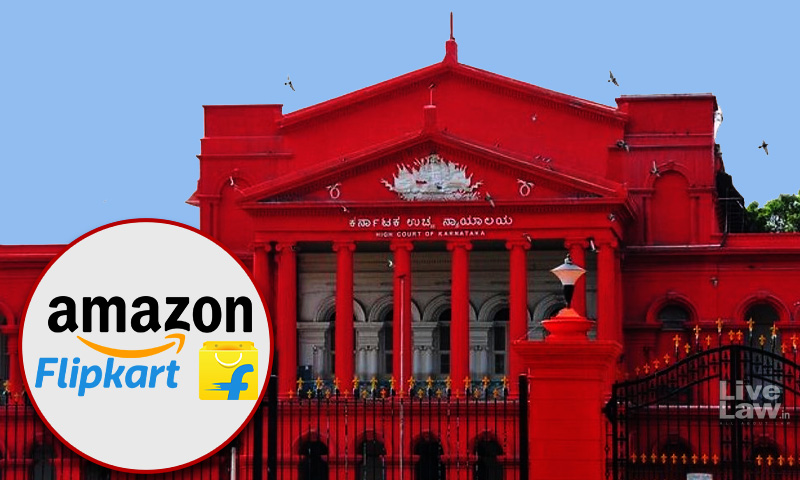 The Karnataka High Court on Friday dismissed the writ petitions filed by e-commerce giants Amazon and Flipkart challenging an order passed by the Competition Commission of India for a preliminary investigation into their alleged anti-competitive practices.

A single bench of Justice PS Dinesh Kumar dismissed the writ petition citing the limitations of the power of judicial review under Article 226 of the Constitution to interfere with a probe ordered by an expert specialized body.

"...it would be unwise to prejudge the issues raised by the petitioners in these writ petitions at this stage and scuttle the investigation", the Court said in the judgment.

The impugned order was passed by the CCI in January 2020 under Section 26(1) of the Competition Act directing the Director General to investigate into the allegations against Amazon and Flipkart. The order came on a complaint filed by Delhi Vyapar Mahasangh (an organization of retailers) who alleged that Amazon and Flipkart were giving preferential treatment to a select set of vendors by having indirect control on their operations, especially the launch of smartphones. The DVM alleged that the e-commerce companies were abusing their competitive position.

The CCI, finding prima facie merit in the complaint, a probe into the practices of Amazon and Flipkart like discounting practices, exclusive tie-ups and private labels,

Senior Advocate Gopal Subramanian, appearing for Amazon, argued that there was no jurisdictional fact enabling CCI to issue the order. Firstly, there must be an agreement, secondly, such agreement must be between the enterprises situated at different levels of the production or supply chain and thirdly, such agreement should cause or likely to cause AAEC.These requirements have not been satisfied. Therefore, there is no application of mind

Senior Advocates Uday Holla and Dhyan Chinnappa, appearing for Flipkart, argued that the anti-trust body's prima facie views are not supported by any evidence or materials. They also highlighted that no agreement, which has adverse effect on competition, has been placed on record. The manufacturers of products sell them on Flipkart's online market place. If a seller chooses to sell exclusively on Flipkart's market place, it is his/her prerogative and Flipkart cannot be held responsible.

The petitioners also argued that they were not served any notice by the CCI before passing the order.

The petitioners also relied on a 2018 order passed by the CCI which dismissed a complaint filed by All India Online Vendors Association holding that Flipkart and Amazon were not dominant players in the market.

Additional Solicitor General Madhavi Divan, defending the CCI, submitted that the impugned order was only a direction for investigation and hence the challenge was premature. The ASG pointed out that the Commission has analyzed several aspects in the context of violation of Section 3(4) of the Act and thecomplexity involving the parameters of 'inter-platform', 'intra-platform' and 'inter-channel distribution'. Commission has recorded the existence of preferred sellers, preferential listing etc., in the impugned order.

As regards the petitioners' reliance on the order passed in the AIOVA case, the ASG also said that the concept of res judicata was not applicable with respect to orders passed under Section 26(1).

A. What is the nature of the impugned order passed under Section 26(1) of the Act?

B. Whether a prior notice and opportunity of hearing is mandatory at the stage of issuing direction to the Director General to hold inquiry under Section 26(1) of the Act?

The issues A and B were answered as :

(A) An order under Section 26(1) of the Act passed by the Commission is an 'administrative direction' to one of its wings departmentally and without entering uponany adjudicatory process; and

(B) Section 26(1) of the Act does not mention about issuance of any notice to any party before or at the time of formation of an opinion by the Commission on the basis of information received by it.

The Court observed that that the impugned order showed that the Commission has looked into the information in detail and applied its mind.

"..in a writ petition filed under Article 226 of the Constitution of India, seeking judicial review, the High Court can examine only the decision making process with the exception namely the cases involving violation of fundamental human rights. The law on the point is fairly well settled", the Court said.