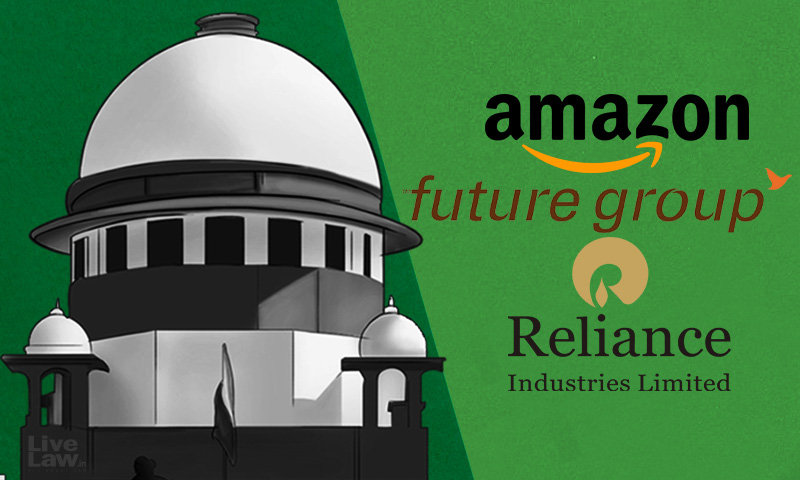 The Supreme Court on Monday issued notice in the plea by Amazon challenging Delhi High Court's stay on the implementation of its own order passed by the Single Judge bench of Justice Midha, which had directed status quo order on the Future - Reliance retail stake sale deal of nearly Rs. 25000 crore. The Supreme Court allowed the National Company Law Tribunal(NCLT) proceedings related to...

The Supreme Court on Monday issued notice in the plea by Amazon challenging Delhi High Court's stay on the implementation of its own order passed by the Single Judge bench of Justice Midha, which had directed status quo order on the Future - Reliance retail stake sale deal of nearly Rs. 25000 crore.

The Supreme Court allowed the National Company Law Tribunal(NCLT) proceedings related to the approval of amalgamation of Future Retail and Reliance to go on but said that the NCLT proceedings should not culminate into any final order on sanction of schemes.

During the hearing today, the Bench observed that the order seems to have decided the appeal finally at the interim. The Court proposed to issue notice at the interim and stay the proceedings at NCLT Mumbai bench on the sanction of Future-Reliance scheme.

Senior Advocate Harish Salve submitted that the FRL's meeting is the first step meeting where everyone else had appeared. And staying the NCLT proceedings will only stay meeting for 6 weeks.

Senior Advocate Gopal Subramaniam stated that these all these meetings were taken in violation of arbitrator's order.

"We have read every page and know exactly what's happening. We don't wish to reveal anything. We are not commenting on merits here." the Bench stated.

The Court has stated that the matter will be heard after three weeks after the rejoinders are submitted in two weeks. Meanwhile NCLT proceedings have been allowed to go on but not to culminate into any final order of sanction of schemes.

Amazon moved the Supreme Court against the order of the Division Bench of the Delhi High Court which had stayed a Single-Bench direction of status quo in favour of Amazon.

On 2nd February, 2021, in a plea by Amazon Inc. against Future Retail Ltd. (FRL) and Reliance Industries' retail stake sale deal worth Rs. 25,000 crore approved by a Board Resolution of FRL last year, a Delhi High Court Single-Judge Bench headed by Justice JR Midha had granted interim relief to Amazon directing all authorities and parties to maintain status quo on the deal until a detailed interim order on the case.

This was, however, stayed on 8th February, by a Division Bench comprising of Chief Justice DN Patel and Justice Jyoti Singh when an appeal was moved by FRL against the status quo order of Justice Midha. The Division Bench had noted that there was no reason to seek a status quo before the learned Single Judge and that statutory authorities like SEBI, CCI should not be restrained from proceeding in accordance with law.

The instant plea before the Supreme Court, filed by Advocate Mohit Singh on behalf of Amazon, submits that the High Court has "failed to appreciate that orders made under the Act [Arbitration and Conciliation Act, 1996] are appealable only if there exists a provision under the Act specifically providing for a right to appeal". Therefore, as the 2nd February order was issued under Section 17(2) of the act, it would stand that no appeal would lie as there are no provisions for appeal provided against an order issued under Section 17(2).

The plea also raises the issue that the High Court has failed to exercise its jurisdiction in accordance with the legal principles settled in a catena of judgments "which have unequivocally held that an appeal is a creature of the stature and the right to appeal inherits in no one", and accordingly, Section 37 consciously takes away the right of an appeal against orders not contemplated under the Section.

It has further been contended that FRL could not have preferred the Appeal before the Division Bench under Order XLIII Rule 1(r) of the CPC read with Section 13(1) of the Commercial Courts Act, 2015, thereby challenging an order issued under Section 17(2) of the Act.

"It is submitted that the Hon'ble High Court, while issuing the Impugned Interim Common Order, conveniently ignored the fact that Section 13(1) of the Commercial Courts Act, 2015 merely provides the forum for filing appeals and does not confer an independent right of appeal. Further, it is the parameters of Section 37 of the Act alone which have to be looked at in order to determine whether the appeal is maintainable or not".

The plea argues that the Impugned Interim Common Order was passed hastily "without waiting for the detailed order which is yet to be issued by the Single Judge of the Hon'ble High Court".

"It is submitted that the Hon'ble High Court, while issuing the Impugned Interim Common Order, failed to appreciate that the Single Judge Order was issued by the Single Judge of the Hon'ble High Court for the limited purpose of preserving the rights of the parties till the pronouncement of the final orders and after coming to the conclusion that the Respondents have violated the directions contained in the EA Order including on the basis of the Respondents' own unequivocal submission that would not maintain status quo".

Other grounds which have been raised include that the Appeal filed by FRL is an attempt to mount a collateral challenge to the EA Order and that FRL has acted in complete disregard of the rule of law and procedure prescribed by law. Further, the High Court has ignored the settled principle that an execution court cannot alter the terms of an order much less a court of appeal.

The High Court, the plea submits, has also failed to appreciate the settled principle on the application of the "Group of Companies" doctrine, due to which the impugned order "comes to a legally unsustainable conclusion that the 'Group of Companies' doctrine has no application, completely ignoring the fact the three agreements considered by the EA was FRL, SHA, FCPL SSA and the FCPL SHA and not the purported agreement entered into by Reliance Retail Limited and FRL".

In light of the above, the plea states that the balance of convenience lies in favour of the Petitioner and there exists a strong prima facie case in its favour. Further, irreparable harm would be caused to the Petitioner if the impugned order is not stayed.