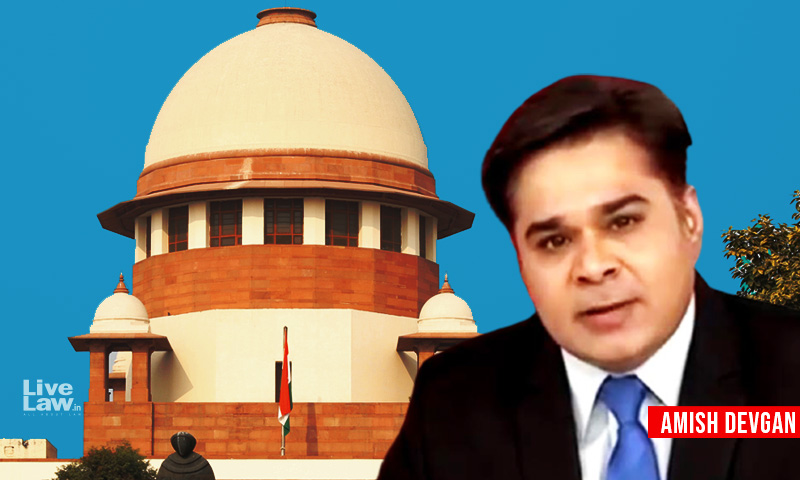 The Supreme Court on Monday refused to quash FIRs registered against Journalist Amish Devgan for his remarks against Sufi Saint Moinnuddin Chisthi.A bench of Justices AM Khanwilkar & Sanjiv Khanna however, clubbed all FIR's filed against Devgan and transferred them to Ajmer. The July 8 stay on investigation and coercive action against the journalist will continue.As many as 7 FIRs...

The Supreme Court on Monday refused to quash FIRs registered against Journalist Amish Devgan for his remarks against Sufi Saint Moinnuddin Chisthi.

A bench of Justices AM Khanwilkar & Sanjiv Khanna however, clubbed all FIR's filed against Devgan and transferred them to Ajmer.

The July 8 stay on investigation and coercive action against the journalist will continue.

As many as 7 FIRs have been filed in Rajasthan, Madhya Pradesh, Uttar Pradesh, Maharashtra & Telangana against Devgan on the basis of alleged derogatory remarks that he made against Sufi Saint Moinnuddin Chisti on his prime time show, telecast on June 15.

While hosting a debate on June 15 on PIL's regarding the Place of Worship Special Provision Act on his show 'Aar Par', Amish had called Khwaja Moinuddin Chisthi, better known as Khwaja Ghreeb Nawaz, an "attacker" and "lootera".

The Supreme Court observed that the issue whether the offence was made out against Devgan can be determined only on a factual evaluation in a trial.

"We have already reproduced relevant portions of the transcript of the debate anchored by the petitioner(Devgan). It is apparent that the petitioner was an equal co-participant, rather than a mere host.The transcript, including the offending portion, would form a part of the 'content', but any evaluation would require examination and consideration of the variable 'context' as well as the 'intent' and the 'harm/impact'. These have to be evaluated before the court can form an opinion on whether an offence is made out. The evaluative judgment on these aspects would be based upon facts, which have to be inquired into and ascertained by police investigation.'Variable content', 'intent' and the 'harm/impact' factors, as asserted on behalf of the informants and the State, are factually disputed by the petitioner. In fact, the petitioner relies upon his apology, which as per the respondents/informants is an indication or implied acceptance of his acts of commission. Having given our careful and in-depth consideration, we do not think it would be appropriate at this stage to quash the FIRs and thus stall the investigation into all the relevant aspects", the judgment observed.

The judgment also contains an elaborate discussion on the concept of 'hate speech' (separate story on that may be read here).

Devgan's petition filed through Advocate Vivek Jain sought quashing of the FIRs which have invoked sections 295A (Deliberate and malicious acts, intended to outrage religious feelings of any class by insulting its religion or religious beliefs), ‪153A‬ (Promoting enmity between different groups on grounds of religion, race, place of birth, residence, language, etc, and doing acts prejudicial to maintenance of harmony), 505 (Statements conducing to public mischief) and 34 (Acts done by several persons in furtherance of common intention) of the Indian Penal Code (IPC).

"In 1 of my debates,I inadvertently referred to 'Khilji' as Chishti. I sincerely apologise for this grave error and the anguish it may hv caused to followers of the Sufi saint Moinuddin Chishti, whom I revere. I have in the past sought blessings at his dargah. I regret this error".