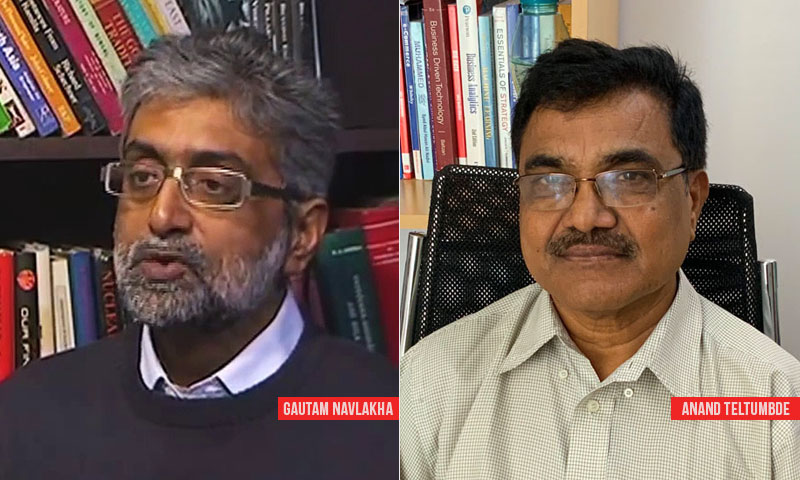 Teltumbde, the grandson-in-law of Dr B R Ambedkar, surrendered in the Mumbai office of NIA, and Navlakha surrendered in New Delhi. Teltumbde was later remanded to NIA custody by a Special Court in Mumbai till April 18.

Today was the last day of the 7-day time granted by the Supreme Court to them to surrender in the case.

Before surrendering, academic-activist Teltumbde wrote an "open letter to the people of India" stating that there was no evidence against him.

"I am implicated on the basis of the five letters among 13 that the police purportedly recovered from the computers of two arrestees in the case. Nothing has been recovered from me.

"But taking shelter under the draconian provisions of the UAPA, that renders a person defenseless, I am being jailed," he said, adding, "And this can happen literally to ANYONE."

"As I see my India being ruined, it is with a feeble hope that I write to you at such a grim moment. Well, I am off to NIA custody and do not know when I shall be able to talk to you again. However, I earnestly hope that you will speak out before your turn comes," the letter concluded.

In an open letter sent before surrendering, Navlakha said

"My hope rests on a speedy and fair trial for myself and my fellow co-accused. This alone will enable me to clear my name, and walk free, having also used the time in jail to rid myself of acquired habits".

"The prosecution has already had more than enough time to make its case. The highest court of the land cannot allow the process to become punishment. Under your leadership, the Supreme Court should act decisively to demonstrate that it is indeed the defender of people's rights and the upholder of the Constitution", they said in the letter to CJI.

On April 8, a bench headed by Justice Arun Mishra had refused to accept the prayer made by Teltumbde and Navlakha for extension on the ground of COVID-19 pandemic. The bench, also comprising Justice Indira Banerjee, extended the time by one more week, as a last chance.

On March 16, a bench comprising Justices Arun Mishra and M R Shah had dismissed the special leave petitions filed by them challenging the February 15 judgment of Bombay High Court which denied them pre-arrest bail on the finding that a prima facie case was made out against them based on materials on record.

However, the bench then granted the petitioners three weeks time to surrender.

The bench had said that the petitions for anticipatory bail were not maintainable, in the light of the material collected by the investigating agency. The bench referred to Section 43D(4) of UAPA, which states that anticipatory bail should not be granted if the Court is satisfied about the existence of a prima facie case.

The case pertains to the violent incidents which occurred on January 1, 2018 at Bhima Koregaon, near Pune during the Dalit organizations' commemoration of 200th anniversary of Victory of Koregaon Battle.

The Pune police alleged that violence was incited by the Elgaar Parishad meeting held at Pune the previous day. It was alleged that the meeting was organized by persons having nexus with banned Maoist organizations. The first wave of arrests were made by the police in June 2018.

In November 2018, the police filed the first chargesheet in the case against the six persons arrested in June 2018. In February 2019, supplementary chargesheet against Sudha Bharadwaj, Varavara Rao, Arun Ferreira and Gonsalves was filed.

Navlakha and Teltumbde were not named in the chargesheet.

The National Investigation Agency took over the investigation of the case from Maharashtra Police in February.

Teltubmde is an IIM-A alumnus, who turned to civil rights activism after a stint at corporate career in companies like BPCL, Petronet etc. He is an author of 26 books, columnist in the Economic and Political Weekly, Frontier, Outlook India etc. As a democratic rights activists he is General Secretary, Committee for Protection of Democratic Rights (CPDR), Maharashtra and an Executive Member of Coordination of Democratic Rights Organization (CDRO). He is also a presidium member of All India Forum for Rights to Education (AIFRTE), an all India movement to achieve equitable and free education to all from KG to PG.

Navlakha is a civil liberty activist, and was the office bearer of People's Union for Democratic Rights and the Editorial Consultant of 'Economic and Political Weekly'.