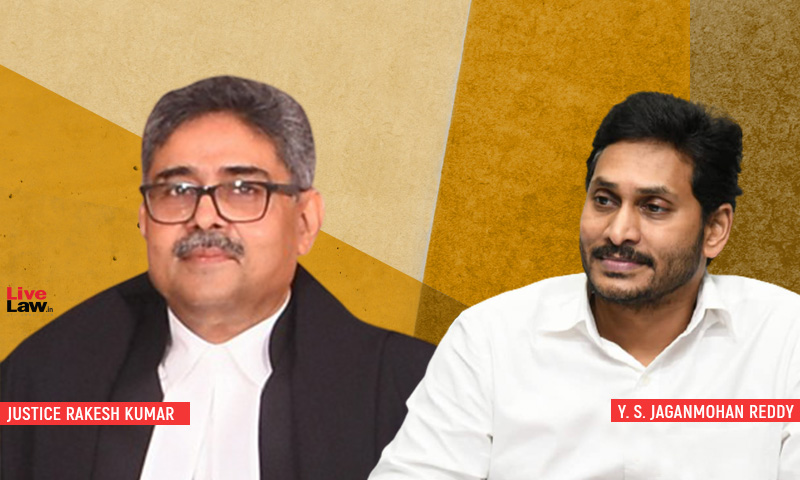 Justice Rakesh Kumar of the Andhra Pradesh High Court has made certain scathing observations against the Chief Minister Jagan Mohan Reddy and the State Government led by him.While rejecting an application moved by the State Government seeking his recusal from hearing a case, Justice Kumar went to the extent of saying that the High Court of Andhra Pradesh was under attack from persons in...

Justice Rakesh Kumar of the Andhra Pradesh High Court has made certain scathing observations against the Chief Minister Jagan Mohan Reddy and the State Government led by him.

While rejecting an application moved by the State Government seeking his recusal from hearing a case, Justice Kumar went to the extent of saying that the High Court of Andhra Pradesh was under attack from persons in power.

The judge observed that state government, after overreaching and undermining constitutional bodies like the legislative council and the State Election Commission, was attempting to do so with respect to the High Court.

"To some extent after getting success in overreaching and undermining two Constitutional Bodies, i.e., Legislative Council and the State Election Commission, it was the turn of highest Court in the State of Andhra Pradesh, i.e., High Court of Andhra Pradesh", he observed in the order.

The judge referred to the social media abuses hurled by members of the ruling party against judges after the High Court passed adverse orders against the government. The High Court has initiated contempt proceedings with respect to such posts and has ordered CBI enquiry against YSRCP members for such defamatory posts.

Protection of fundamental rights of citizens of AP has become difficult

The judge made a strong remark that the protection of fundamental rights of the citizens of Andhra Pradesh by the High Court has become difficult.

"One can draw an adverse inference against the acts/excesses by the police in the State of Andhra Pradesh", the order mentioned.

"...one can infer how the Government in the State of Andhra Pradesh is proceeding. Firstly, attack was made on Legislative Council, thereafter another Constitutional body, i.e., State Election Commission; and, now the High Court of Andhra Pradesh and even the Supreme Court is under attack by persons, who are in power"

It may be recalled that Justice Rakesh Kumar was presiding the bench which sought to examine if there was a 'breakdown of constitutional machinery' in the state of AP. A division bench led by him converted the hearing on a batch of habeas corpus petitions and petitions alleging police excesses as a hearing on the issue whether there is a "constitutional breakdown" in the State of Andhra Pradesh. Though the State Government filed an application seeking recall of the order, the bench rejected it. The proceedings in that case have been stayed by the Supreme Court on an appeal made by the State Government. While issuing the stay order, the Chief Justice of India orally observed that the HC proceedings were 'disturbing'.
Collision course between High Court and State Govt

The High Court and the State Government are seemingly on a collision course. The High Court has interfered with many crucial decisions of the Jagan government such as the three capital move and the investigation into Amaravati land scam. The HC ordered a status quo on the three-capital decision and has stayed the SIT inquiry announced by the government into Amaravati land scam. In October, the Chief Minister Y S Jagan Mohan Reddy had shot off a letter to the Chief Justice of India alleging that few judges of the High Court were trying to destabilize the government by passing adverse orders against it on petitions filed by the TPD, the political opposition. The contents of the letter were publicized by the Secretary to the Chief Minister in a press conference.

Google search 'Khaidi No. 6093' for information about Chief Minister

The judge mentioned in the order that he got "disturbing information" about the Chief Minster after searching ""Khaidi No.6093" in Google. Then the judge went on to extract the screenshots of newspaper reports about the corruption allegations against Jagan Mohan Reddy, which were returned after a Google search of "Khaidi No 6093".

"Till the publication of letter, dated 06.10.2020, of the Hon'ble Chief Minister of Andhra Pradesh, I was not having much information about him. But, immediately thereafter, I became curious to know about him. Subsequently, I was told that if I go on site 'Google' and type only "Khaidi No.6093", I can get many information. Accordingly, I did the same thing and thereafter I got very disturbing information. Some of such extracts I got downloaded are quoted herein below", the judge said in the order.

The order then went on to enumerate the 30 criminal cases pending against Jagan Reddy. It was noted that police has closed many cases citing lack of evidence. This, the judge said, reflected "how head of the Police, i.e., the Director General of Police, Government of Andhra Pradesh, is functioning as per the dictate of the Government, not in upholding rule of law in the State".

"Is it not a mockery with the system?", the judge asked referring to the delay in the prosecution against the Chief Minister.

"I am well aware that many of my observations made herein above may not be in consonance with the technicality, but since on the verge of my retirement, my impartiality has been questioned by the Government of Andhra Pradesh on my face in the present proceeding, in my defence, I was constrained to record above facts, which are based on record and may not be disputed. My only endeavour is to uphold the majesty of law", the judge added.

These observations were made by Justice Rakesh Kumar while rejecting an application made by the State Government seeking his recusal from a division bench hearing a case. The Additional Advocate General, Sudhakar Reddy, alleged in the application that Justice Kumar had taken a biased stand against the government. It was alleged in the application that Justice Kumar made an oral observation during a previous hearing that "We will declare there is break down of constitutional machinery in the State and hand over administration to the Central Government". Certain newspaper reports were annexed with the application to support the allegation that the judge had made such oral remarks. However, Justice Kumar denied making any such remark and said that he was merely expressing doubts about the legality of the move of the government to auction public land for private bidders. He rejected the allegations of bias and came down heavily on the government for seeking his recusal.

The judge rejected the recusal application by terming it an attempt to "malign the image of one of the members of the bench".

"If Court starts entertaining such petitions; in no case, the Court can be allowed to dispense justice. With a view to uphold the majesty of law and repose the confidence of citizen in the judicial system, such endeavour made by the State is considered as malicious and cannot be approved. If such petitions are entertained, it will amount to allowing the party for hunting the Bench. Such an action by the State was not expected, but in this State, as I have observed the circumstances herein above, everything can be possible. However, at the same time, the Court cannot be frightened by any such action of the State".

The application was filed on the basis of an affidavit on oath made by Mr. Pravin Kumar, Special Officer, Mission of A.P, I.T Towers, Mangalagiri, Guntur District/Mission Director, Mission Build Andhra Pradesh, Government of Andhra Pradesh.

The allegations in the affidavit were discarded as "untrue" and "false" amounting to "perjury".The bench ordered the initiation of criminal proceedings for perjury against the officer and issued show-cause notice for contempt action against him.
Describing the recusal application as 'astonishing', the judge remarked :

"For a while I was astonished with such behaviour of State but immediately thereafter, I perceived that bureaucrats of this State have been emboldened after apparent success of the Hon'ble Chief Minister of the State of Andhra Pradesh in addressing a letter to the Hon'ble the Chief Justice of India and making it public, making allegation against one of the senior Judges of Hon'ble Supreme Court, the Hon'ble Chief Justice of A.P High Court and number of sitting Judges of A.P High Court with their name".

He is retiring from service tomorrow.