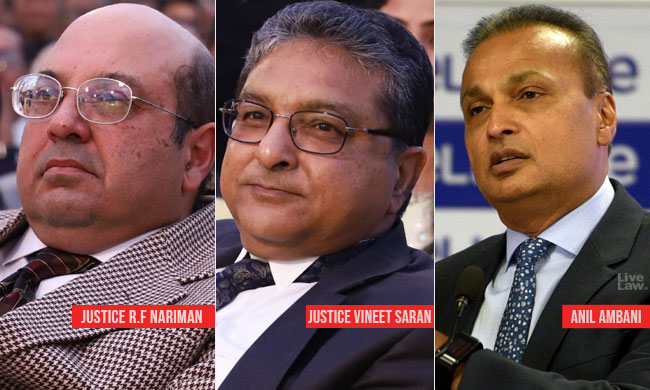 Anil Ambani, Chairman of Reliance Communications, appeared in the Supreme Court in response to the notices issued by the apex court in the contempt petitions filed Swedish company Ericsson. Three officials of the company were also present.

The bench of Justices R F Nariman and Vineet Saran however adjourned the matter for tomorrow. Since the bench has not exempted the personal appearance, and the Chairman and officials of RCom will have to appear tomorrow as well.

The contempt petitions have been filed alleging that RCom violated the undertaking made before court to pay off debts due to Ericsson worth Rs 550 crores. The company has missed the two deadlines of September 30 and December 15, leading to the filing of two contempt petitions.

The Swedish gear-maker has alleged that RCom has "wilfully and consciously" defied the order dated August 3 of the top court and the undertaking given before it to pay up by September-end.

The apex court had on October 23 had given one last opportunity to RCom for clearing the settlement amount, by setting December 15 as the deadline. When this deadline was also missed, the SC issued contempt notice to Ambani on January 6. The bench was not prepared to accept the offer of part-settlement made by RCom for Rs. 118 crores.

Dushyant Dave, appearing for Ericsson, submitted that RCom had failed to honour the commitment made before the apex court despite receiving Rs.3000 crores after selling its assets.

Another contempt petition was filed by Ericsson last week, following the news that RCom was seeking to file insolvency petition under the Insolvency and Bankruptcy Code. Ericsson alleges that it is an attempt by the telecom operator to wriggle out of the commitment made to it, because the triggering off insolvency proceedings will attract moratorium. Also, Ericsson, being an operational creditor, will get priority only after the settlement of claims of financial creditors.