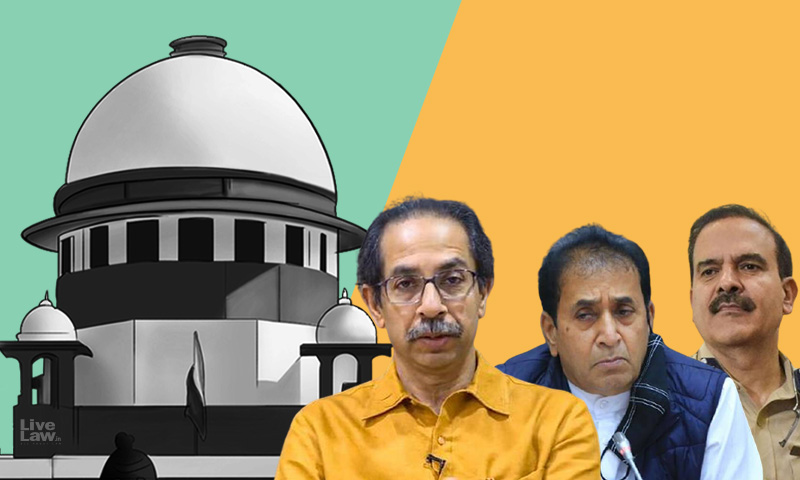 "Given the serious nature of allegations, and the personas involved, the matter do require an independent agency to investigate the matter. It is a matter of public confidence. We may also note that what has been ordered is only a preliminary enquiry. Therefore, we are no inclined to interfere with the impugned order".

"The two personas involved in the case were working together till they fell apart. Both of them were holding high positions. Certainly an independent investigation is needed", Justice Kaul said during the hearing.

"The nature of personas involved in the case, and the seriousness of the allegations, warrant a CBI investigation", Justice Kaul added.

"It is not an enemy of yours who has made the allegation. The man was almost your right hand", the judge told Senior Advocate Dr Abhisehk Manu Singhvi, who was appearing for the Maharashtra Government.

Singhvi submitted that the basis of the High Court order was that he was the Home Minister of the State. Now that he has resigned, investigation by an external agency is not needed, Singhvi submitted.

At this point, Justice Hemant Gupta observed that as on the date of the High Court order, Deshmukh was the Home Minister.

Singhvi also raised the point of federalism as a central agency is investigating a matter in state, despite the fact that the Maharashtra Government has revoked the general consent for CBI investigation.

Justice Gupta: You don't say that the allegations are false because you yourself have the Commissioner.

Senior Advocate Kapil Sibal, appearing for Deshmukh, argued that the High Court order was erroneous as it was passed without hearing him. Parambir Singh's letter is based on hearsay evidence, and he claims no direct knowledge of the allegations; therefore, the High Court ought to have heard Deshmukh before ordering CBI enquiry on the unsubstantiated allegations, Sibal argued.

Sibal said that he would not object to an investigation under the monitoring of the High Court or the Supreme Court, but does not want the CBI.

"You cannot pick and choose the agency", Justice Kaul responded.

Sibal said that if investigations are allowed on such flimsy grounds, no democracy will be able to survive. He placed reliance on the Supreme Court judgment which refused to order investigation against Prime Minister Narendra Modi in the Sahara-Birla papers case on the ground that the documents were not admissible evidence.

"I am vilified unheard. I had to resign. If I was given an opportunity to bring my version on record, this would not have happened", Sibal said.

When Justice Hemant Gupta asked if an accused has a right to be heard before registration of FIR, Sibal said that Deshmukh was not an accused in the case, and not even a suspect.

Referring to the Sahara-Birla case, Sibal submitted that the law has to be uniform for all.

However, the bench was not persuaded by the arguments of Singhvi and Sibal and proceeded to dismiss the matter, upholding the High Court's order.

Deshmukh raised the following arguments to challenge the judgment passed by a division bench of Chief Justice Dipankar Dutta and Justice GS Kulkarni on April 5 :

Deshmukh takes objection to the fact that the High Court did not opt to follow the well settled procedure of ordering a court-monitored investigation by a Special Investigation Team constituted by it, instead of handing over the investigation to an agency "controlled by the Central Government".

It is also highlighted in the petition that Parambir Singh's allegations are not substantiated and are motivated. Had the Court given an opportunity to him to respond, he could have demonstrated the falsity of the allegations, Deshmukh says in the plea.

"The erstwhile Commissioner of police has referred to alleged conversations by others, which is pure hearsay, not produced any substantive evidence before Court, that can, in law, be relied upon, and without giving notice to the Petitioner, has handed over investigation to an agency which the State Government has least confidence in. If this principle were to be followed, and courts under Article 226 of the Constitution were to accept bald and motivated statements of this nature, made much after the alleged incidents, without any actionable evidence before Court, then the Petitioner believes that such processes may well be followed to destabilize governments", the plea states.

The Bombay High Court on Monday directed CBI to complete the preliminary enquiry within 15 days and decide the further course of action regarding the registration of FIR following that.

Deshmukh resigned hours after the Bombay High Court's Order. The High Court had held that an un-biased probe is required to "unearth the truth."