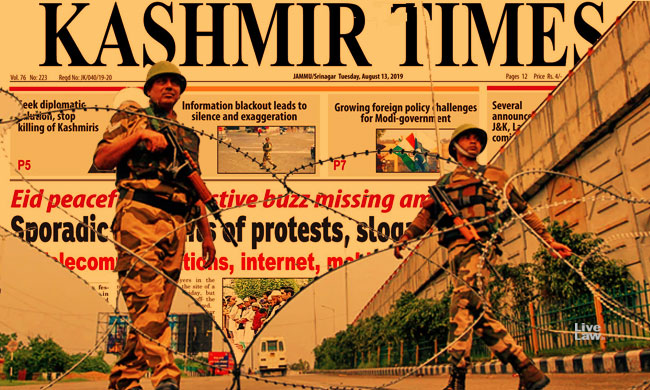 Kashmir Times Editor, Anuradha Bhasin, who had moved the Supreme Court against curbs on freedom of media and press in Jammu and Kashmir, has filed an additional affidavit in the matter stating that the 'information blackhole' around rural areas and other districts of Kashmir continues till date.

She has categorically deposed that despite statements from govt. officials regarding lifting of restrictions from vehicles' movement, movement of journalists in Srinagar continues to be restricted by security forces. This has led news printing agencies to reduce their publication from the usual 12-16 pages to 2-4 pages.

With regards the restrictions imposed on movement of journalists, she has submitted that:

She has also pointed out that there is a serious violation of Article 19 of the Constitution by the security forces in as much as they are trying to censor media content by requiring the journalists to show their recorded footage of the situation and in several instances the photographs and videos shot by them are forcefully deleted.

With regards the blockade of communication she has submitted that:

She has also criticized 'Media Center' established by the State authorities in Hotel RK Sarovar Portico. It has been submitted that:

She also submitted that neither the doctors nor the administrators are willing to disclose any information about the stocks of medicines and services of doctors available on a daily basis since the night of lock down. This was a result of targeting of journalists and people speaking to the Press, by security forces.

The additional affidavit has been furnished based on the information gathered by the Editor-in-Chief of the Kashmir Times who had visited the valley recently and also reports of many news agencies.

Conclusively, she has asserted that constant monitoring of news reports being sent to bureau offices through the media center, disregard for press cards and movement passes, debilitating restrictions on movement of journalists, and the deletion of photos and videos shot by journalists which represent the situation in Kashmir, is a severe breach of the rights and freedoms of the press and media as guaranteed under Articles 19, 21 and 14 of the Constitution of India.

The bench of CJI Ranjan Gogoi, Justices S. A. Bobde and Abdul Nazeer had deferred hearing of the matter by an order of adjournment dated August 16, stating that the Court would like to give Government a little time to review the situation.