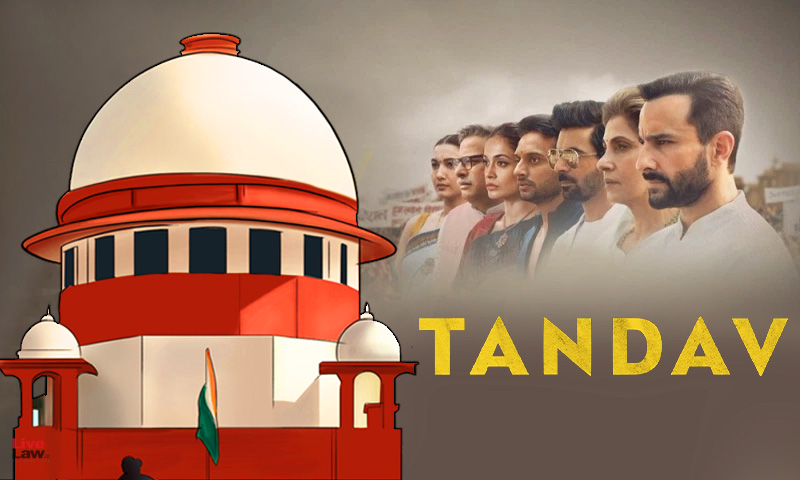 She has been booked for alleged commission of offences under Sections 66 (Computer-related offences), 66F (Punishment for cyber terrorism) and 67 (Transmitting obscene material) IT Act, 2008 (as amended) apart from Sections 153-A (Promoting enmity between different groups), 295 (Defiling place of worship with intent to insult the religion), 505(1)(b) (Public mischief), 505(2) (Statements promoting hatred between classes), 469 (Forgery for purpose of harming reputation) of IPC.

With regard to the application of Section 295-A I.P.C. the Court has noted that the scenes show that the scenes have been made, intentionally using the names of Hindu Gods and sage to convey an insidious message.

In reference to the charge under Section 153-A(b) I.P.C., the Court has noted that the offence is fully made out since the act of the applicant is prejudicial to the maintenance of harmony between different religious, social and communal groups and would affect public peace and tranquility.

Further, the Court has also noted that the contents of the dialogues in the above-noted scenes would show that the offences under Sections 505(1)(b) I.P.C. and 505(2) I.P.C. are fully made out.

Underlining that an attempt has been made to widen the gap between the higher castes and the scheduled castes in the aforesaid scenes and that her fundamental right of life and liberty cannot be protected by grant of anticipatory bail, the Court has remarked,

"The sentiments of majority community have been hurt by display of the characters of their faith in disrespectful manner and on the other hand…the applicant had not been vigilant and has acted irresponsibly making her open to criminal prosecution in permitting streaming of a movie which is against the fundamental rights of the majority of citizens of this country."

Lastly, the Court said that the conduct of the applicant shows that she has scant respect for the law of the land and her conduct further disentitles her to any relief from this Court, since co-operation with the investigation is a necessary condition for grant of anticipatory bail.

As per the Prosecution's case, the content of Tandav Series is affecting the image of the police of the State of Uttar Pradesh adversely. The Following points have been averred by the Prosecution: -

In a Dial 100 police vehicle, two actors are shown traveling with open doors in a police uniform, consuming liquor, and hurling abuses.

After witnessing part-1 of the movie, it is seen that the Hindu Gods and Goddesses have been depicted in a bad light with the intention of inciting communal sentiments.

The post of Prime Minister has been depicted in a manner which will adversely affect the democratic system of the country.

Caste and community-related utterances have been made deliberately so that it may affect the public peace.

Utterances have been made against the State police, public administration and the constitutional posts so that the element of hate is developed between the communities and there are scenes that show disrespect for the scheduled castes.

On account of the scenes and dialogues in the movie, the social harmony and public peace is being adversely affected.

All this has been deliberately done to make the web series controversial and gain publicity for the purpose of commercial gain.