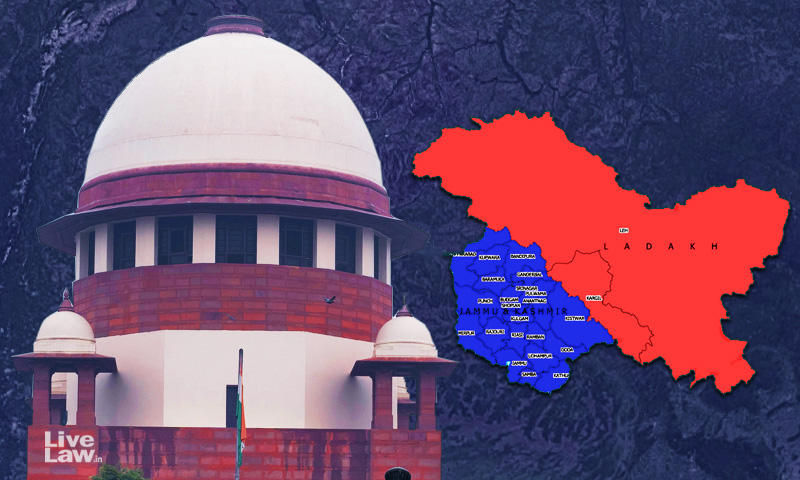 An Application has been filed in the PIL seeking restoration of 4G services in Jammu and Kashmir, attempting to bring on record individual narratives of hardships faced by doctors, teachers, students etc. and, a comparative technical analysis of functioning of websites at 2G speed and 4G speed.The application filed in the PIL filed by 'Foundation of Media Professionals' seeks to bring on...

An Application has been filed in the PIL seeking restoration of 4G services in Jammu and Kashmir, attempting to bring on record individual narratives of hardships faced by doctors, teachers, students etc. and, a comparative technical analysis of functioning of websites at 2G speed and 4G speed.

The application filed in the PIL filed by 'Foundation of Media Professionals' seeks to bring on record empirical and anecdotal evidence regarding impact of speed curbs on the life of ordinary people in J&K.

Following are the new documents :

"There are conferences all over the world in which we would like to take part in, but we don't have 4G. We need 4 G because of the COVID emergency. Also doctors always need to be updated", stated the account of a doctor, produced along with the application.

"WhatsApp has a lot of fake news. WhatsApp is full of fake stuff. People get confused. For that you need authentication information and to access authentic information, you need high speed internet", another doctor was stated to have said.

"If anyone wanted to misuse the internet, they would have done that already, even on 2G", as per another account.

"This is so frustrating. Trying to download the guidelines for intensive care management as proposed by doctors in England. It is as many as 24 MBs. It has been one hour…still not able to do so." , as per another doctor.

"How do we ensure that the knowledge that we have (on the basics on the virus) is disseminated to the common people?] How will the knowledge we have be imparted to the people at large", a doctor was stated to have said.

"I am not able to go for online classes or read different things. Everyone is in depression. We have no source of entertainment. We want to go outside but that is not possible because of the lockdown. When we stay at home, entertainment is also important. There should be a difference between animals and humans. They have treated us like animals, literally. How will be compete with other parts of the country with just 2G? How can we?"

A teacher gave a statement as follows :

"If we really want the students of Jammu and Kashmir to grow, they should be part of the world developments in education etc. This has other consequences if we don't. After the abrogation of article 370 students were saying - `We thought we will be like Delhi students.' So there should be complete 4G. It should never be suspended. Because 90% of the education nowadays is through online. You have to give them notes, sites. We are taking them to the world. When students aren't given this, they begin to think - `We are second class citizens.'"

"We are talking of the 3 D view of the interior of the earth. How can we explain that on just voice? With just voice, how can I explain to them that the earth is like an onion? It has layers. I have to show the onion, I have to cut the onion diagonally so that I can explain the layers of the earth. That can be possible only when there is interaction through a video conference or a video call."

According to a parent, the lack of appropriate net speed has caused mood swings in children.

"One of my kids is in 10th standard and the other is in the 9th standard. For the whole day, they keep using smart phones and other gadgets and they keep trying to download smart classes. But at the end of the day when they feel they aren't able to study, they feel frustrated. Their temperament has changed. They were very sober, gentle kids. But I can see for the last two weeks, a change in them. They've become hyper-active. They keep shouting at elders and fighting with each other. The only reason being they are not able to study"

Based on several such accounts, the applicant stated

"in summation, crucial aspects of life – from emergency health care to spreading awareness about COVID to studying and parenting and also delivering justice are all in a state of intensive care, without an appropriate internet speed"

"users will face significant issues when using video conferencing applications. These issues will be exacerbated by multitasking"

The affidavits and reports by Waghre have noted that tasks on 2G speed can take 50 times longer to accomplish than the time that would be taken on 4G speed.

The Public Interest Litigation filed by Foundation for Media Professionals, seeks to challenge multiple Government orders imposing restrictions on internet access during COVID-19 outbreak, as being illegal, unconstitutional and violative of Articles 14, 19(1), 21 and 21A of the Constitution of India.

Matter is likely to be listed this week.