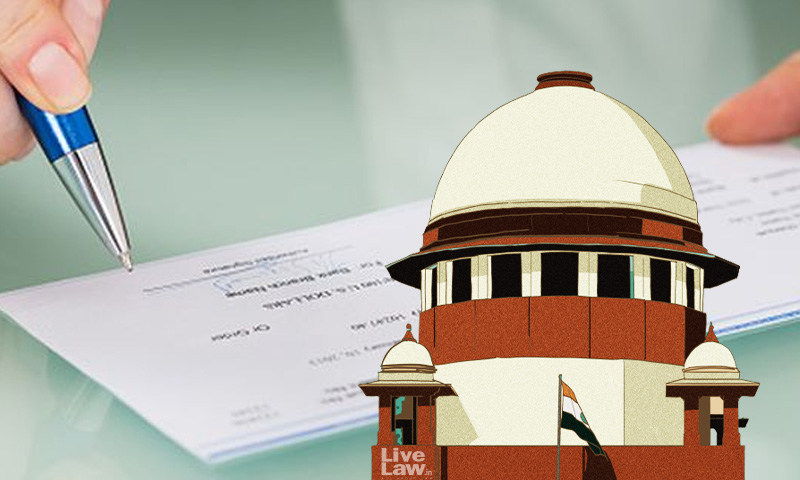 The Supreme Court on Wednesday directed the Union of India, the State Governments and the High Courts to respond to the suggestion of constituting Special Magistrate Courts with retired judicial officers for faster disposal of cases under Section 138 of the Negotiable Instruments Act. On being informed by Amicus Curiae Senior Advocate Sidharth Luthra that the States of Maharashtra,...

The Supreme Court on Wednesday directed the Union of India, the State Governments and the High Courts to respond to the suggestion of constituting Special Magistrate Courts with retired judicial officers for faster disposal of cases under Section 138 of the Negotiable Instruments Act.

On being informed by Amicus Curiae Senior Advocate Sidharth Luthra that the States of Maharashtra, Gujarat, Rajasthan, Uttar Pradesh and Delhi have the highest number of pending cheque bounces cases, the Court sought the responses of the High Courts of Maharashtra, Gujarat, Rajasthan, Allahabad and Delhi about the proposal of launching a pilot project of Special Courts with retired Magistrates in 5 districts.

A Bench comprising Justice Nageswara Rao, Justice BR Gavai and Justice Ravindra Bhat was considering the suo motu case In Re Expeditious Trial Of Cases Under Section 138 of N.I Act which was initiated last year.

The Amicus submitted that these Special Magistrate Courts can be constituted invoking powers under Section 18 read with S.13 of the Code of Criminal Procedure.

The Expert Committee headed by Justice R. C. Chavan (Former Judge, Bombay High Court) appointed by the Court through its order dated 4th March 2021, to submit a report specifying steps to be taken for early disposal of cases under the Negotiable Instruments Act, had also suggeted the constitution of special courts.

The Expert Committee had submitted that as per its calculations, the establishment of these special NI Courts may require recruitment of 1,826 special judicial officers and a total cost of Rs 126.59 crores.

The committee therefore proposed that since it may not be immediately feasible to establish de novo courts and recruit fresh candidates, it may be helpful to examine the possibility of appointing retired judicial officers as Special Judicial/Metropolitan Magistrates.

The report submitted by Amicus stated as follows :

"It is thus suggested that the High Courts must employ the services of retired judicial officers for this purpose. The human resources required to operationalise these courts could also be drawn from retired court staff. This scheme could be tested on a pilot basis in 5 judicial districts with the highest pendency in the 5 states with the highest pendency (namely, Maharashtra, Rajasthan, Gujarat, Delhi and Uttar Pradesh) and the viability of utilising services of retired judicial officers can be examined based on the results of the pilot study".

According to the amicus report, a total number of 33,44,290 cheque bounce cases are pending in the Country. 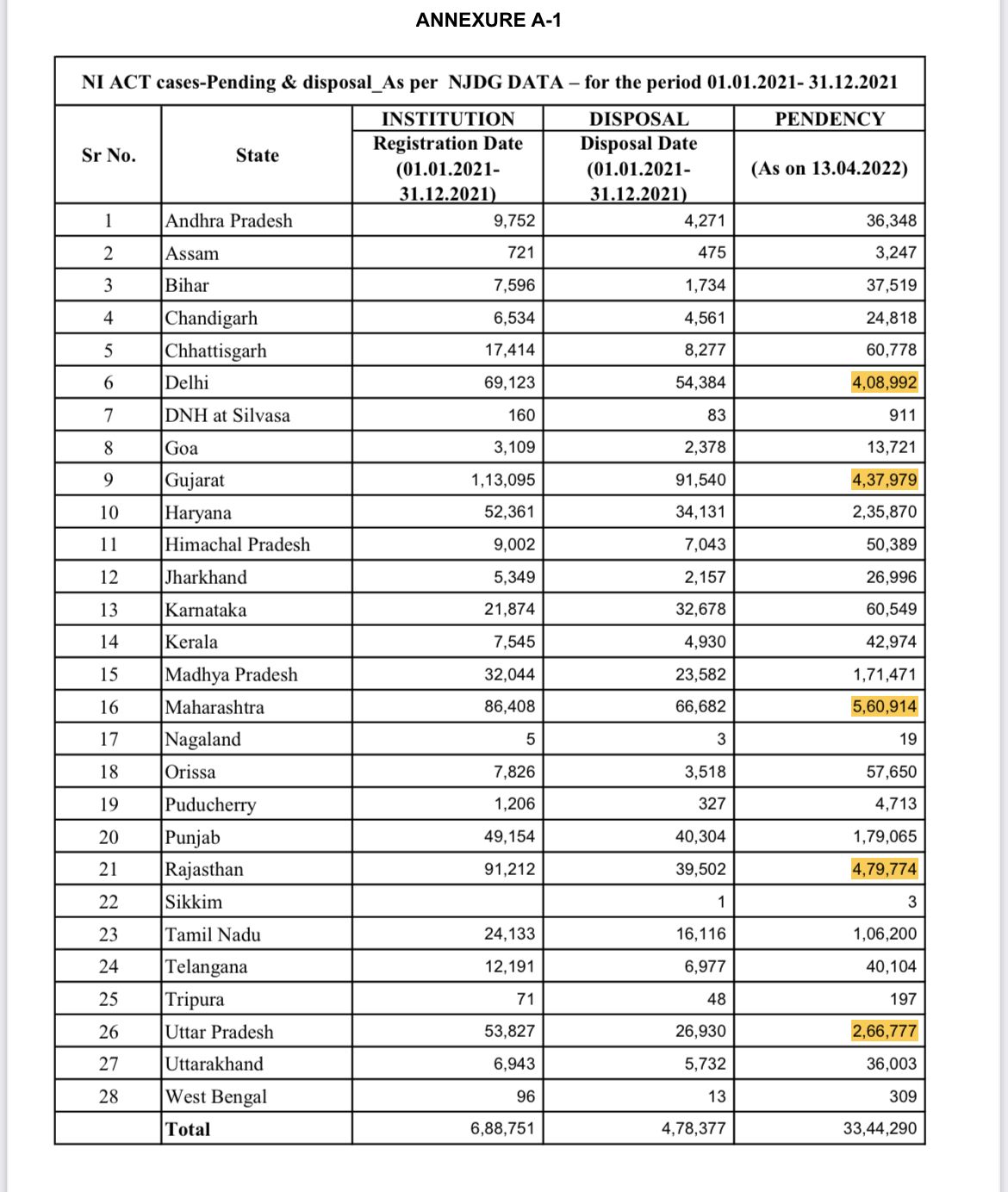 Besides the scheme of special NI Courts, the Bench directed the Centre, States and the High Courts to respond with suggestions to the following proposal of the Committee & suggestions of the Amicus:

National Portal for Summons: The suggestion is to create national portal for secured display of summonses, searchable by account number/name may be created

The Bench further noted that there has been non compliance by some High Courts with court's order dated 16th April 2021 directing High Courts to issue practice directions to the Magistrates to record reasons before converting trial of complaints under Section 138 of the Act from summary trial to summons trial.

The Bench asked the High Courts of Madras, Sikkim, Uttarakhand, Patna & Orissa which haven't complied with the directions to comply with order expeditiously without any further delay.

The Bench also sought the response of Union, States and the Indian Banks Association to the proposal of closing cheque cases where the amount is less than a certain limit.

During the hearing, the Amicus Mr Luthra informed the case that there has been a disturbing increase in the number of pending cases.

The Bench observed that a greater analysis of pendency may be required to be done, with analysis of the number of cases disposed of in the last few years.

With regard to the Committee's suggestion of having a national portal for secured display of summonses, searchable by account number/name, Mr.Luthra informed that it would enable a person whose cheque has bounced to check if some summons has been issued.

Responding to the court's statement as to how the portal may not prevent evasion of summons, Mr Luthra submitted that "Evading summons is not a complicated issue in this country, avoiding notice is also not unknown"

The Bench submitted that all the all problems that may happen need to be considered before a decision is taken. The bench asked the Amicus to come up with a pilot project, following which the suggestions of the Union of India can be taken in this regard.

Additional Solicitor General SV Raju however submitted that the portal should not allow accused to misuse system and delay proceedings. He submitted that if there's a portal, there has to be constant feeding of data as well.

Responding to court's query as to who will supervise the forum, Mr.Luthra suggested that the Indian Banks Association of the Union if India will have to do that.

"These would be special magistrate courts, so they are magistrates, empowered as magistrates to do all the acts of a magistrate but are not going to have a different procedure, they would only support the existing courts system", Mr Luthra said

Mr Luthra further submitted that the Government will have to provide the infrastructure, like it did when special courts were set up under the Prevention of Corruption Act.

The bench also asked if the High Court will be able to have control over retired judicial officers if they are appointed at Special Courts.

"These people are not part of judicial system, once a man goes out of the system, there's no control please remember that", Justice Bhat said.

The Amicus opined that once they are retired and are appointed as special magistrates, the High Court will have control.

The Bench observed that besides Magistrates, infrastructure will also be needed for these courts. The Bench added that the Delhi High court had tried a similar system with evening courts for smaller cheque bounce cases, but the experiment did not produce the intended results.

The Bench asked the Amicus to confer with Additional Solicitor General Vikram Banerjee appearing for Union of India and examine the possible problems that could arise .

On an earlier hearing, the Court had observed that the Union Government has the obligation to create Special Courts under Article 247 of the Constitution to deal with the case arrears created by a central legislation.

The Supreme Court had in March 2022 directed Registrar Generals of all High Courts to file a status report regarding compliance of directions issued by it to expedite the trial of cheque dishonour cases under Section 138 of the Negotiable Instruments Act.

On April 16, 2021, a Constitution Bench of the Court had issued a slew of directions, on the basis of recommendations made by a court-appointed committee, for expeditious trial in cheque dishonour cases.

The order was passed by a bench comprising Chief Justice of India SA Bobde, Justices L Nageswara Rao, BR Gavai, AS Bopanna and S Ravindra Bhat in the suo moto case In re Expeditious Trial of Cases Under Section 138 NI Act.

The Court had on March 10th last year directed the formation of a Committee under Chairmanship of former Bombay High Court judge Justice RC Chavan to consider steps to be taken for expeditious disposal of cheque bounce cases under Section 138 of the Negotiable Instruments Act.

The Court had found it appropriate to form a committee to consider all the suggestions made in this case and submit a report clearly specifying the steps that must be taken to facilitate an early disposal of these cases through the Country at all levels if Judiciary. The Committee was asked to consult any expert it wishes to in the matter, and submit its report in 3 months of its first meeting.

The Court had asked the Union of India to provide such secretarial assistance including whole time or part time secretary to the Committee, allocate space for functioning of committee and provide for allowances that may be necessary.

It was on March 7 last year that the bench of CJI Bobde and Justice L Nageswara Rao registered the suo moto case to devise methods for expeditious trial of Section 138 NI Act cases.

Case Title : In Re Expeditious Trial Of Cases Under Section 138 of N.I Act