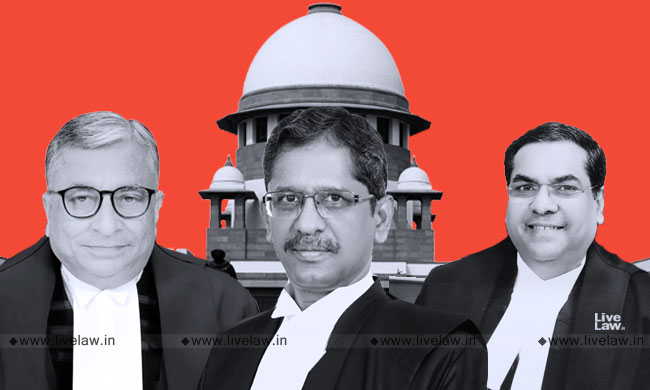 A three-judge bench of the Court also explained that at the stages of Sections 8 and 11 of the Act, the Courts should undertake a prima facie examination of the validity of the arbitration agreement.

"Existence and validity are intertwined, and arbitration agreement does not exist if it is illegal or does not satisfy mandatory legal requirements. Invalid agreement is no agreement", observed a bench comprising Justices NV Ramana, Sanjiv Khanna and Krishna Murari in the case Vidya Drolia and others v Durga Trading Corporation.

The bench was essentially answering a reference made to it by a division bench on the issue whether landlord-tenant disputes under the Transfer of Property Act are arbitrable. While holding that such disputes can be subject matter of arbitration when they are not covered by rent control laws, the Court also discussed issues relating to the stage when the question of arbitrability can be decided, the scope of examination under Sections 8/11 etc.

"The courts at the referral stage do not perform ministerial functions. They exercise and perform judicial functions when they decide objections in terms of Sections 8 and 11 of the Arbitration Act", the main judgment authored by Justice Khanna observed.

The Court noted that Section 8(1), after the 2016 amendment, enjoins the Court to undertake a prima facie examination as to the validity of the agreement.

The judgment of Justice Sanjiv Khanna explained the scope of prima facie examination as follows :"

"Prima facie case in the context of Section 8 is not to be confused with the merits of the case put up by the parties which has to be established before the arbitral tribunal. It is restricted to the subject matter of the suit being prima facie arbitrable under a valid arbitration agreement. Prima facie case means that the assertions on these aspects are bona fide"(Paragraph 86)

"Prima facie examination is not full review but a primary first review to weed out manifestly and ex facie non-existent and invalid arbitration agreements and non-arbitrable disputes. The prima facie review at the reference stage is to cut the deadwood and trim off the side branches in straight forward cases where dismissal is barefaced and pellucid and when on the facts and law the litigation must stop at the first stage.

Only when the court is certain that no valid arbitration agreement exists or the disputes/subject matter are not arbitrable, the application under Section 8 would be rejected. At this stage, the court should not get lost in thickets and decide debatable questions of facts.Referral proceedings are preliminary and summary and not a mini trial"(Paragraph 87)

"Accordingly, when it appears that prima facie review would be inconclusive, or on consideration inadequate as it requires detailed examination, the matter should be left for final determination by the arbitral tribunal selected by the parties by consent. The underlying rationale being not to delay or defer and to discourage parties from using referral proceeding as a rue to delay and obstruct. In such cases a full review by the courts at this stage would encroach on the jurisdiction of the arbitral tribunal and violate the legislative scheme allocating jurisdiction between the courts and the arbitral tribunal. Centralisation of litigation with the arbitral tribunal as the primary and first adjudicator is beneficent as it helps in quicker and efficient resolution of disputes"(Paragraph 89).

'Existence of arbitration agreement' under Section 11

However, sub-section 6A was omitted after the 2019 amendment. But this omission was is in view of the introduction of a new regime of institutionalized arbitration.

The report of the Justice B N Srikrishna commission, which recommended the 2019 amendment, was referred to in that regard as follows :

"After the Amendment Act of 2019, Section 11 (6-A) has been omitted because appointment of arbitrators is to be done institutionally, in which case the Supreme Court or the High Court under the old statutory regime are no longer required to appoint arbitrators and consequently to determine whether an arbitration agreement exists".

Based on this, the judgment observed :

The Court noted with approval that it has been held in Mayavati Trading Pvt. Ltd. v.Pradyuat Deb Burman(2019) that the omitted sub-section (6-A) to Section 11 of the Arbitration Act would continue to apply and guide the courts on its scope of jurisdiction at stage one, that is the pre-arbitration stage.

In this backdrop, the Court proceeded to explain how the question of 'existence of agreement' will include its validity as well.

"Existence of an arbitration agreement presupposes a valid agreement which would be enforced by the court by relegating the parties to arbitration.

The judgment opined that the exercise of prima facie power of judicial review as to the validity of the arbitration agreement would save costs and check harassment of objecting parties when there is clearly no justification and a good reason not to accept plea of non-arbitrability.

The judgment of Justice Khanna summarized the conclusion in Paragraph 95, based on the reasons given in paragraph 92, as follows :

The separate but concurring judgment penned by Justice N V Ramana summarized the conclusions as follows :

(b)Usually, subject matter arbitrability cannot be decided at the stage of Sections 8 or 11 of the Act, unless it's a clear case of deadwood.

(c)The Court, under Sections 8 and 11, has to refer a matter to arbitration or to appoint an arbitrator, as the case maybe, unless a party has established a prima facie(summary findings) case of non­existence of valid arbitration agreement, by summarily portraying a strong case that he is entitled to such a finding.

(d) The Court should refer a matter if the validity of the arbitration agreement cannot be determined on a prima facie basis, as laid down above, i.e., 'when in doubt, do refer'.

(e) The scope of the Court to examine the prima facie validity of an arbitration agreement includes only:

Justice Ramana observed that though the statutory language of Section 8 and 11 are different, however materially they do not vary and both Sections provide for limited judicial interference at reference stage.

Other reports based on the judgment :

Disputes Which Are To Be Adjudicated By DRTs Are Not Arbitrable: Supreme Court Overrules 2012 Delhi HC Judgment