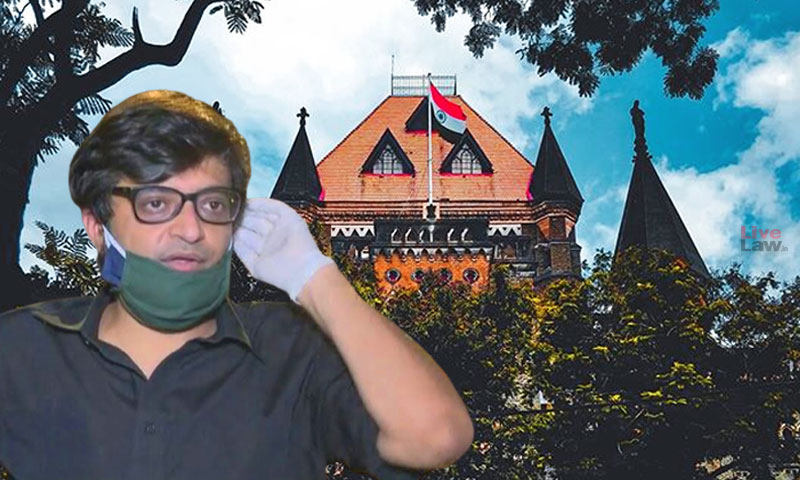 Republic TV Chief Arnab Gowswami has moved the Bombay High Court seeking a direction to the Court of Chief Judicial Magistrate, Raigad-Alibaigh, not to take cognizance of the final report filed by the Raigad Police on Friday, in a 2018 Anvay Naik abetment of suicide case. Goswami has alleged that the entire case reeks with malafide on part of the State Government and is an example of...

Republic TV Chief Arnab Gowswami has moved the Bombay High Court seeking a direction to the Court of Chief Judicial Magistrate, Raigad-Alibaigh, not to take cognizance of the final report filed by the Raigad Police on Friday, in a 2018 Anvay Naik abetment of suicide case.

Goswami has alleged that the entire case reeks with malafide on part of the State Government and is an example of the Executive's interference via 'premeditated diktat' to law and order officers.

The Raigad Police on Friday filed a 1,914 pages long charge sheet against Goswami and two others, before a court in Alibaug in neighbouring Raigad district, where the case for alleged abetment of suicide of interior designer Anvay Naik and his mother Kumud has been registered. The trio has been charged under IPC sections 306 (abetment to suicide), 109 (punishment for abetment) and 34 (act done by several people in furtherance of common intention).

Goswami has urged the Court not to take cognizance of this charge sheet as his very arrest on the morning of November 4 was with a malafide intention and in a completely illegal manner, solely at the behest of the Maharashtra Government. He has also urged the Court to stay all further proceedings, including investigation in the matter.

He has drawn the Court's attention towards a recent press conference held by the Maharashtra Home Minister Anil Deshmukh on 29 November 2020, wherein it was publicly declared that a "strong chargesheet" would be filed against Arnab Goswami "soon".

Goswami has stated that the above remarks were made despite an absolute, prima facie decision of the Supreme Court in his bail application, that the FIR registered against him is frivolous/ illegal.

"It is pertinent to mention that this shocking premeditated political declaration by Mr. Anil Deshmukh came at a news conference 12 hours after the Hon'ble Supreme Court delivered the said judgement dated 27th November 2020. The said statement and the corresponding investigation at the behest of the Home Department, State of Maharashtra, not only establishes the malicious and malafide intent guiding the overall investigation in the present case but also exposes the complete subversion of the Supreme Court order dated 27th November 2020," the plea states.

"It is also pertinent to mention that the Home Minister of Maharashtra was not only prejudging and publicly guiding the investigation in the case, but was also putting a timeline of progression to the case. It is thus clear that the entire investigation in the case is being puppeteered by a political machinery and is tainted and prescripted by the executive powers at play of the Respondents."

It is alleged that there is a "well- documented pattern of interference" in the present case on the part of the Home Department, Maharashtra state and the Home Minister Mr. Anil Deshmukh, inasmuch the reinvestigation was launched at the behest of Home Department's letter dated May 26. Attention is also drawn towards the Home Minister's remarks against Goswami on the floor of the Maharashtra Assembly on September 8, 2020.

"It must be noted that the Home Minister of Maharashtra made the comments on the floor of the Maharashtra assembly more than 1 month before the case was officially reopened. This only reiterates the fact that it is with pure political instruction from the ruling dispensation that the law and order machinery is at work," Goswami suggested.

Further it is pointed out that despite the categoric observations of CJM, Raigad that no permission/ order of the court was obtained prior to reinvestigating the said case, the Maharashtra Home Minister "in a blatantly false statements" claimed that the investigation was going on after getting permission from the court.

On Thursday, Goswmai had moved the Bombay High Court seeking stay of the investigation in this case. He had urged that the matter be transferred to CBI as the Maharashtra Police are in the process of filing a completely malicious and vengeful chargesheet against him, with the malafide intension to harass him and to stifle the means of justice.

Goswami was arrested on the morning of November in a case registered by the Raigad Police in 2018 for allegedly abetting the suicide of a 52-year old interior designer named Anvay Naik and his mother Kumud Naik. He was remanded to judicial custody by CJM Alibag and was kept at a local school which has been designated as a COVID-19 centre for the Alibaug prison. Later, he was shifted to Taloja prison in Mumbai after the police alleged that Goswami used mobile phone in custody without permission.

He was released on Bail by the Supreme Court on November 11, while observing that prima facie it cannot be said that he was guilty of having abetted the suicide within the meaning of Section 306 of the IPC.

Before the Supreme Court, Goswami had urged that the investigation could not be reopened in the absence of an order for further investigation by the Magistrate. The Court had however observed in the passing that the Police has the power to investigate further in a case where 'A Summary' Report is filed.

"A Summary is filed in a case where there is offence, but police have not traced evidence. Does the A Summary deprive the police of the power to investigate? I cannot accept the position that police cannot investigate further in a case of A Summary," Justice Chandrachud had observed.