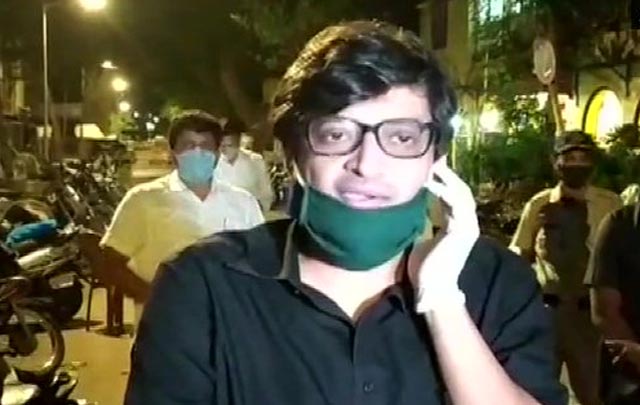 A civil suit has been filed in a Mumbai court seeking to restrain Republic TV, R Bharat and news anchor Arnab Goswami from discussing or referring to the FIR registered by the Mumbai police alleging manipulation of TRP ratings by TV channels.The suit filed by Iqbal Shaikh, a former Assistant Commissioner of Police, Mumbai, also seeks damages to the tune of Rs 5 lakhs to the mental agony caused...

A civil suit has been filed in a Mumbai court seeking to restrain Republic TV, R Bharat and news anchor Arnab Goswami from discussing or referring to the FIR registered by the Mumbai police alleging manipulation of TRP ratings by TV channels.

The suit filed by Iqbal Shaikh, a former Assistant Commissioner of Police, Mumbai, also seeks damages to the tune of Rs 5 lakhs to the mental agony caused to the plaintiff on account of the "defamatory reports" against Mumbai police.

The plaint filed through Advocate Abha Singh states that Republic TV and R Bharat have launched a "smear campaign" against the Mumbai police which has aggrieved the plaintiff, who "takes pride of his legacy in the illustrious Police Force of Mumbai".

"..when the Defendant No. 1(Arnab Goswmai), as a personally interested party, makes rhetorical allegations in a fiery tone by branding Mumbai Police an Organisation inhabited by dishonest officers, and that too without any substance, then it badly hurts the Plaintiff for whom Mumbai Police has been his heart and soul", the plaintiff, who has won Presidents gallantry award for his service, states in the plaint.

The Plaintiff submits that when a case is under investigation under statutory provisions, Defendant No. 1(Arnab Goswami) cannot be granted the liberty to discuss his own case and arbitrate it in his own TV channels by defaming Mumbai Police.

It is contended that the news reports of the channels and the debates hosted by Mr. Arnab Goswami are done in complete violation of journalistic ethics.

As per the plaint, Mr. Goswami, the first defendant, triples up, first as the Owner and Director of Media Company running the Republic channels, second as the Editor-in-Chief and third as the main anchor of TV Debates. This, the plaintiff argues, is an "open contempt" to the guidelines issued by the Press Council of India as per which Owner/Management has to be distinct from Editor.

"The Plaintiff submits that the Defendant No. 1 has transgressed his limits as an owner of two most popular TV Channels and has started pursuing his own agenda by being the Editor-in-Chief and by blurting out large sermons about his own case which is under probe by a statutory body", the plaint reads.

It is argued that to topple the investigation in the TRP scam case - in which the Mumbai police suspects Republic TV to have made gains - the defendants have deliberately launched a libellous campaign against the Mumbai police.

The plaint has quoted some of the statements said to have been made by Goswami against Mumbai Police Commissioner, Param Bir Singh, during the channel debates.

"The Plaintiff submits that Republic TV channel is subject to a statutory investigation in this case and that they have got all the lawful remedies to redeem their position in the legally constituted forums. However, instead of following the course prescribed under the law, it is seeking to take law in their own hands and have embarked upon a unilateral process to defame the Mumbai Police before the large following it has. All these things are taking place in open and gross violation of the Norms of Journalistic Conduct issued by the Press Council of India under the Press Council of India Act, 1965", the plaint states.

In this regard, the plaintiff states that the view that a person cannot be made an accused in a case just because his name was not mentioned in the FIR is wrong.

"The Plaintiff submits that a FIR is just a First Information, which is a basis of commencing investigation. As the investigation progresses further entities could be made subject to an investigation based on evidence forthcoming.

However, Defendant No. 1 is seeking to foreclose the investigation by coming up with a libellous and defamatory campaign of a sustained nature. For this reason, it is imperative that an injunction be directed against Defendant No. 1 to refrain from discussion this case in his two TV Channels and the web news portals under his control and of which he is the Owner, Editor-in-Chief as well as the Main Prime Time Anchor".

This case will be heard on October 21 at 11 am in Courtroom No. 4 of Addl Sessions Judge Marathe in City Civil Court.

The High Court, which considered the petition yesterday, refused to accept the request of Senior Advocate Harish Salve to order interim protection from arrest for his client Goswami.

The Court said that such an order was not necessary as Goswami has not been named as an accused in the FIR.

The Court directed the Mumbai police to first issue summons to Goswami for appearance before the investigating agencies if he is proposed to be added as an accused. On receiving such a summons, Goswami should appear and cooperate with the investigation, the Court added, recording the undertaking made by Salve.