"No Possession, No Consumption, No Recovery Of Drugs From Aryan Khan Then Why Is He Sent To Jail For 20 Days?": Mukul Rohtagi Argues In Bombay HC 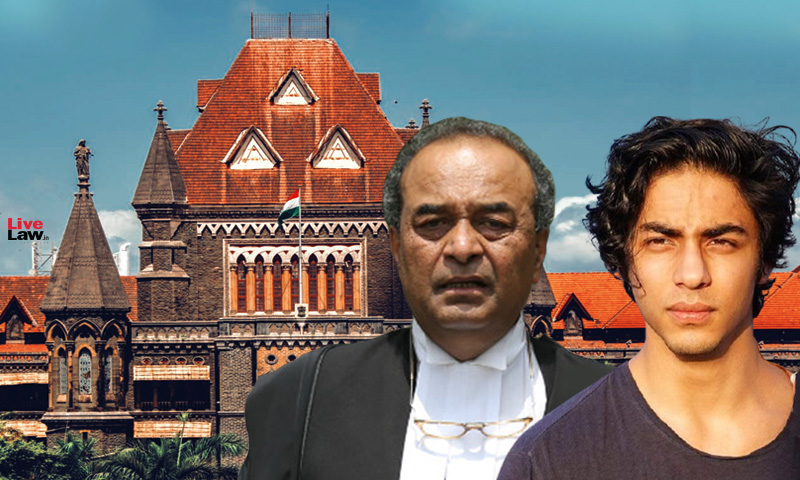 Senior Advocate Mukul Rohatgi today told the Bombay High Court that there was no recovery of contraband or proof of consumption by Aryan Khan in the cruise ship drug case. "There is no consumption, no possession... Why this boy has been sent to 20 days in jail?" Rohatgi remarked. Justice NW Sambre is hearing the bail applications filed by Aryan Khan, Arbaaz Merchant and Munmun...

Senior Advocate Mukul Rohatgi today told the Bombay High Court that there was no recovery of contraband or proof of consumption by Aryan Khan in the cruise ship drug case.

"There is no consumption, no possession... Why this boy has been sent to 20 days in jail?" Rohatgi remarked.

The three had moved the High Court following rejection of bail by the Special NDPS Court. Today is 24th day since their arrest on October 3.

Rohatgi has argued that there was no occasion to arrest Khan as nothing was recovered from him and there is nothing on record to show that he had consumed anything either. No medical test was done, he pointed out.

Further, denying the allegations of 'conscious possession' of contraband which was recovered from Khan's friend Arbaaz Merchant, Rohatgi submitted,

Khan is booked under sections 8(c) read with 20b (purchase), 27 (consumption), 28 (attempt to commit offence), 29 (abetment/ conspiracy) and 35 (presumption of culpable mental state) of the NDPS Act.

No conscious possession by Aryan Khan

Denying the allegations of 'conscious possession' of contraband, Rohatgi submitted,

In this regard he relied on a judgment where the Supreme Court had purportedly said that the Minister, whose servant brought a terrorist into the house, cannot be booked for harbouring a terrorist.

"Possession of somebody else cannot be my possession unless there is control and knowledge," Rohatgi thus argued.

He also relied on the case of Ragini Dwivedi v. State of Karnataka, where the Top Court granted bail to the Kannada actor, arrested for allegedly consuming and supplying drugs at parties and events organized by her and others.

The Top Court had noted that no drugs had been found with the actress and the entirety of the case against her was based on a statement. It was also of the opinion that it could only be assumed that she had consumed drugs at the parties.

"Even if conscious possession is taken, the maximum he can charged with is 1 year, for the 6 grams," Rohatgi then added.

Rohatgi submitted that the entire case of NCB against Khan is based on "voluntary" statements given under Section 67 of the NDPS Act, which are inadmissible in evidence as per last year's Supreme Court judgment in the Tofan Singh case.

WhatsApp chats cited by NCB not related to instant case

Rohatgi, arguing for Khan, submitted that none of the WhatsApp chats recovered from his phone relate to the cruise party.

"None of those chats have anything to do with the onset of this saga or...conspiracy if you want to call it that. The chats will have to be tested at the time of trial. But to use a general phrase of conspiracy, there is nothing."

"Now if there are a group of friends who plan to smoke up there is a meeting of minds. But the plan here was aborted. They were arrested before. The penalty is of consumption."

Rohatgi further pointed out that there was no seizure of the mobile phone and the same is not even in the panchnama.

Chats between Aryan Khan and alleged supplier Aachit Kumar were about Poker, not Drugs

NCB has claimed that Aachit Kumar was Aryan Khan's illicit drugs supplier. He is presently under judicial custody in connection with the case.

"Aachit was not on the cruise, he was arrested from his home...There is no meeting of minds between the accused."

"Aachit is also a young college kid. He was the person with whom Aryan was playing poker. And the chats were before 12- 14 months and that is being cited in the WhatsApp…There was nothing beyond communication about Poker."

NCB indirectly invoking Section 27A of NDPS Act against Khan

Rohatgi pointed out that Khan is not charged under Section 27A of the NDPS Act for financing illicit drug trade. Nevertheless, the agency has charged him with conspiracy, creating a "general, amorphous vague kind of a situation" to indirectly bring Section 27A and bar bail under Section 37 of NDPS.

No connection with Panch witnesses

Khan has denied any connection with panch witness Prabhakar Sail, who has accused NCB officials of extorting money in connection with Khan's arrest. He has also denied acquaintance with KP Gosavi (a private person at the NCB raid whose picture with Aryan Khan went viral).

"I don't accuse any officer of NCB. I am not concerned or connected with panch witness no. 1 or 2," Rohatgi submitted for Khan.

He has also filed a rejoinder, clearing air on the issue of allegedly influencing the witnesses.

Immunity from prosecution under NDPS Act

Rohatgi submitted that even if it is presumed that Khan was in conscious possession of contraband, the maximum he can be charged with is 1 year. The minimum punishment, he highlighted as per Section 20b (ii) of the NDPS Act, is nothing. "The legislative intent is clear," he remarked.

"They are some boys… there is also immunity from prosecution after they go to a rehabilitation centre," he added.

Rohatgi pleaded to before the Court that consumption of cannabis is legal in some parts of the world, including the United States.

So far as the present case is concerned, he submitted,

"There is no consumption or recovery. No driver was carrying it on my behalf. I am arguing a case which is actually not there against me."