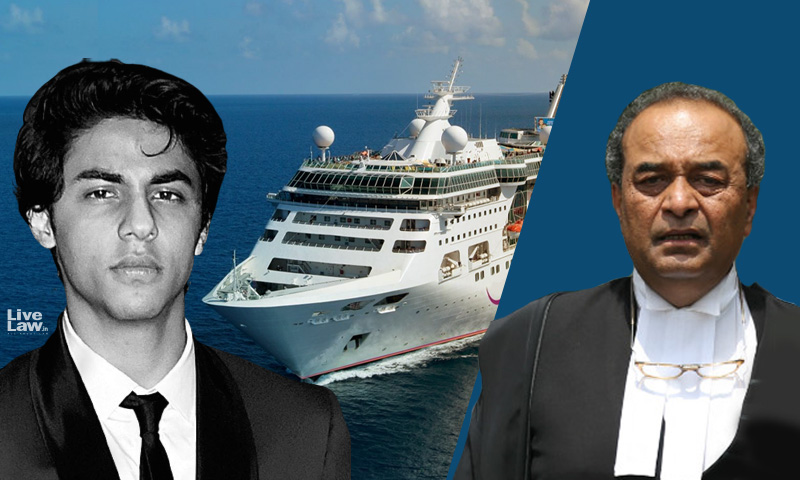 The Bombay High Court will continue hearing the bail applications filed by Aryan Khan, Arbaaz Merchant and Munmun Dhamecha in the cruise ship drug case tomorrow at 2.30 PM. The three had moved the High Court following rejection of bail by the Special NDPS Court. They are booked under sections 8(c) read with 20b (purchase), 27 (consumption), 28 (attempt to commit offence),...

The three had moved the High Court following rejection of bail by the Special NDPS Court.

They are booked under sections 8(c) read with 20b (purchase), 27 (consumption), 28 (attempt to commit offence), 29 (abetment/ conspiracy) and 35 (presumption of culpable mental state) of the NDPS Act.

1. "There was no occasion to arrest my client, short and simple"

Rohatgi has argued that there was no occasion to arrest Aryan Khan as nothing was recovered from him and there is nothing on record to show that he had consumed anything either. No medical test was done, he pointed out.

2. "What somebody else had in their Shoe is not my concern"

No recovery of contraband was made from Aryan Khan. However, his friend Arbaaz Merchant was found hiding charas (6 gms) in his shoes.

The Special NDPS Court had rejected Khan's bail plea saying that Khan had apparently knowledge about the same, amounting to "conscious possession" of illegal drugs.

Responding to these observations, Rohatgi submitted:

3. "I went there, I did not have anything but I was arrested."

Rohatgi highlighted that Aryan Khan was not in possession of contraband and no recovery was made from him. He was not a customer but merely a guest at the party, invited by Prateek Gaba, the event manager.

"I went there, I did not have anything but I was arrested," he said.

He further stated that the party never began as he was apprehended from the cruise terminal.

"Now if there are a group of friends who plan to smoke up there is a meeting of minds. But the plan here was aborted. They were arrested before," he added.

4. "I am arguing a case which is actually not there against me."

Reiterating that it was a clear case of no possession, no consumption and no recovery, Rohatgi submitted for Khan, "I am arguing a case which is actually not there against me."

He highlighted that Khan's driver was also not found to be possessing any contraband on his behalf.

Rohatgi pointed out that Khan is not charged under Section 27A of the NDPS Act for financing illicit drug trade. Nevertheless, the agency has charged him with conspiracy, creating a "general, amorphous vague kind of a situation" to indirectly bring Section 27A and bar bail under Section 37 of NDPS.

Senior Advocate Amit Desai appearing for Arbaaz Merchant also told the High Court that the NCB is roping in anybody and everybody using an "umbrella charge of conspiracy" to attract the rigours on grant of bail under Section 37 NDPS Act.

6. "I don't want to sully my case by siding with either the political personality or the panchas"

Khan has denied any connection with panch witness Prabhakar Sail, who has accused NCB officials of extorting money in connection with Khan's arrest. He has also denied acquaintance with KP Gosavi (a private person at the NCB raid whose picture with Aryan Khan went viral).

In this regard, Rohatgi told the Bench,

"The Director of NCB yesterday said the affidavit was a result of some political leader. But today the unsavoury controversy is rebounding on me, they are putting it on me… I don't want to sully my case by siding with either the political personality or the panchas. Because I am not connected to anyone."

He has also filed a rejoinder, clearing air on the issue of allegedly influencing the witnesses.

7. "Unsavory controversy between political personalities and NCB cannot rub off on me"

Referring to the affidavit of Prabhakar Sail which emerged in social media on Sunday, where he raised allegations about extortion bid in the case, Khan filed a rejoinder denying any involvement in the controversy.

On this note, Rohatgi for Khan submitted,

"I don't accuse any officer of NCB. I am not concerned or connected with panch witness no. 1 or 2. (Prabhakar Sail or KP Gosavi)…Unsavory controversy between political personalities and NCB cannot rub off on me."

8. "There is immunity from prosecution after they go to a rehabilitation centre"

Rohatgi submitted that even if it is presumed that Khan was in conscious possession of contraband, the maximum he can be charged with is 1 year. The minimum punishment, he highlighted as per Section 20b (ii) of the NDPS Act, is nothing.

"The legislative intent is that if you consume or caught with possession of small quantity and if you go in for rehabilitation there is immunity from prosecution," he remarked.

9. "NCB opened up umbrella of conspiracy to charge anybody and everybody"

Senior Advocate Amit Desai appearing for Arbaaz Merchant told the High Court that the NCB is roping in anybody and everybody using an "umbrella charge of conspiracy" to attract the rigours on grant of bail under Section 37 NDPS Act.

"Before being charged with conspiracy there has to be evidence of an agreement," he said which is claimed to be missing in this case.

He pointed out that at the time of arrest Aryan, Arbaaz and Munmun were not booked for conspiracy under Section 29. However, now, it has become the heart of NCB's case against them.

10. "No Possession, No Consumption, No Recovery Of Drugs From Aryan Khan Then Why Is He Sent To Jail For 20 Days?"

Obhan & Associates Act On Okinawa Autotech's Joint Venture With Tacita
Latest News
+ More
1A Candidate Has No Legal Right To Insist That The Recruitment Process Set In Motion Be Carried To Its Logical End : Supreme Court
2Women Leaving Law: What Is The Way Ahead?
3While Settling Claims, Insurance Company Should Not Seek Documents Which Are Beyond The Control Of Insured To Furnish: Supreme Court
4Registrar Of The Jharkhand Cooperative Society, Who Also Is The Ex-Officio Director Of The Respondent, Jharkhand High Court Says Appointment As Arbitrator Not Barred As Parties Had Agreed Earlier
5Supreme Court Weekly Round Up: May 16- May 22,2022
6Justice L. Nageswara Rao's Six Years At The Bench - An Extensive Tenure Marked By Notable Interventions
7The Arbitrator Cannot Allow Forfeiture Of A Substantial Amount Of Consideration Without Proof Of Actual Loss Solely On The Ground That It Was Earnest Money: Delhi High Court
8Section 63 Copyright Act - Copyright Infringement Is A Cognizable & Non Bailable Offence: Supreme Court
लाइव लॉ हिंदी
+ More
International
+ More
1Abortion Laws In The US And Other Countries
2Leaked Draft Judgment Of US Supreme Court Indicates Overruling Of Roe v.Wade Abortion Rights Decision
3The Indian Connection With Pak Decision To Live-Stream Court Proceedings
4Russian Suspension At The Human Rights Council: Band-Aid On A Bullet Wound?
Environment
+ More
1Supreme Court Permits E-Rickshaws In Matheran As Pilot Project To Check Feasibility
2In Case Of Doubt, Protection Of Environment Would've Precedence Over Economic Interest: SC Revokes Approval For Doubling Castlerock to Kulem Railway Line
3NGT Bars Auroville Foundation From Township Construction Till Environmental Clearance Is Obtained
4Ghazipur Landfill Fire: NGT Says Dump Sites In Cities Are Like 'Time Bombs', Constitutes Joint Committee Headed By Former Delhi High Court Judge