Clear Case Of Conspiracy; Will Find Out Ultimately Connections Between Accused : NCB Opposes Bail To Aryan Khan & Others 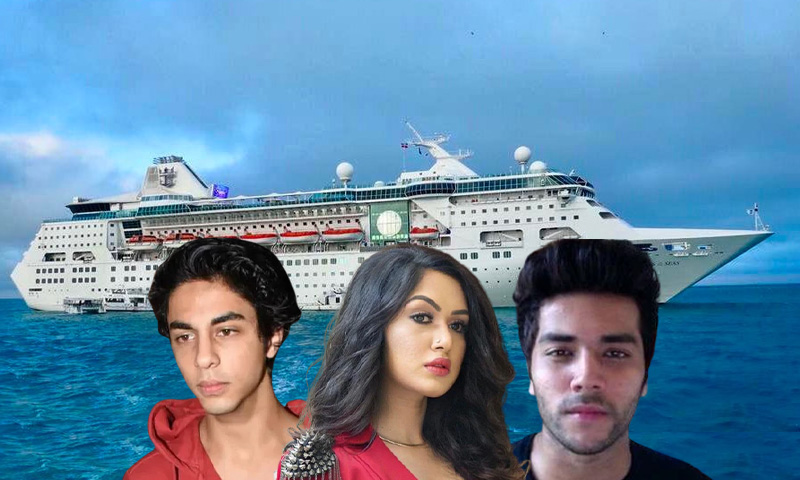 The Special NDPS Court in Mumbai has reserved judgment on the bail pleas filed by Aryan Khan, Arbaaz Merchant and Munmun Dhamecha, who were arrested by the Narcotics Control Bureau in connection with the cruise ship drug case on October 3.

Special Judge VV Patil today, after hearing Additional Solicitor General Anil Singh appearing for NCB, said that he will pronounce order on October 20. During the hearing, the Judge had indicated that he will go through Khan's allegedly incriminatory WhatsApp chats.

The NCB has alleged that Khan is involved in the illicit "procurement and distribution" of contraband, and further he was in touch with some persons abroad who appear to be a part of an International Drug Network for illicit procurement.

Senior Advocate Amit Desai appearing for Aryan Khan denied the allegations as baseless, and highlighted that there has been no recovery from Khan. "If he did not have cash, he had no plans to purchase. If he had no substance, he wasn't going to sell or consume," Desai submitted.

However, their counsels argued that they were mere invitees to the party and have no involvement in the alleged illicit drug trade. It was also said that the alleged recoveries were of 'small quantity', not commercial.

All three, Aryan, Arbaz and Munmun were booked under sections 8(c) read with 20b (purchase), 27 (consumption), 28 (attempt to commit offence), 29 (abetment/ conspiracy) and 35 (presumption of culpable mental state) of the NDPS Act.

They approached the special court after a magistrate's court rejected his bail application on the grounds that it was not maintainable.

Aryan Khan a regular consumer, was in conscious possession of drugs

It is NCB's case that though no recovery was made from Aryan Khan's person, he was in "conscious possession" of the contraband, as he is connected with Arbaz (from whom 6 gms charas was recovered) and Aachit (from whom 2.6 gms of ganja was recovered).

The agency relied on the case of Showik Chakraborty v. Union of India, where bail was denied in a case of alleged procurement of drugs, despite no recovery being made from Showik's person.

The Bombay High Court had noted that therein that Showik was connected with one Anuj Keshwani, from whom commercial quantity of contraband was recovered. Therefore, Showik appears to be an "important link" in the chain of drug dealers and the rigour of Section 37 with respect to the grant of bail will apply.

"'Innocent until proven guilty' doesn't apply in the cases of NDPS offences. In the NDPS Act, the presumption is of culpable a mental state, and it is for the accused to prove that he was not in possession during trial," ASG Singh said.

However, Senior Advocate Desai argued that Showik's case has to be distinguished from an end consumer's case because Showik didn't consume but dealt in drugs.

He also relied on the case of Union of India v. Nawaz Khan, to argue that merely because there is no recovery, as assuming the applicant's case, the rigours of 37 of the NDPS Act for bail will still apply.

The ASG further argued that in the accused' WhatsApp chat there is a specific reference to bulk quantity, and that Khan is not a first-time consumer.

"The evidence placed on record shows he is a regular consumer of contraband since last few years," the ASG said.

Clear case of conspiracy, rigours on grant of bail applicable

The ASG said that since there is a charge of conspiracy, rigours on grant of bail under Section 37 of the NDPS Act are applicable in this case.

"We will ultimately find out how they all connected to each other and establish a case of conspiracy. This isn't a case of bail at this stage. It can be considered at an appropriate stage," he submitted.

NCB has also claimed that Aachit Kumar, who was arrested based on the statement made by Aryan Khan, has been arrested with 2.6 gms of Ganja. Thus, the culpable mental state u/s 35 of the Act of this Applicant is clearly established.

However, Senior Advocate Desai contended that presumption of guilt under section 35 applies during trial and not during investigation.

Quantity of recovery immaterial in case of conspiracy

ASG Singh has also opposed the applicants' reliance on quantity of recovery and said, "If the entire scheme of the act is seen, there are provisions under the Act which have nothing to do with quantity but stringent punishment is prescribed."

SPP Advait Sethna said that in the Arman Kohli case, bail was rejected even though 1.35 gms of cocaine, i.e., small quantity was recovered.

On the argument that the maximum punishment for offences alleged against Aryan Khan is one year, the ASG said, "if a connection is established between one accused and another, charged with a graver offence, the same punishment will apply for both."

WhatsApp chats of accused can be used by NCB

Yesterday, Advocate Taraq Sayed appearing for Arbaaz Merchant had argued that none of the WhatsApp chats can be looked into by the NCB because there is no seizure panchnama for the mobile phones.

Controverting this, ASG submitted, "Where is the ground in the bail application that there is no seizure? There is a voluntary surrender and statement of accused. Can it not be relied?"

Retraction of accused' statement a matter of trail

As per NCB, all three accused had given voluntary statements under section 67 of the NDPS Act, which they later retracted.

Relying on the case of Union of India v. Shiv Shankar Jaising, ASG Singh argued that retraction of a voluntary statement u/s 67 of the NDPS Act is a matter of trial.

"Even though there is no retraction here, as the retraction came on the 7th, it can be considered only at trial," he said.

Accused not young kids but, future of nation

Yesterday, Khan's counsel had appealed to the Court's conscious saying that the accused are some young kids, not drug peddlers and that they have learnt their lesson, if at all.

Responding to this, the ASG submitted,

"I disagree. This is our future generation. The entire country will be depending on them. This is not what our freedom fighters in the land of Mahatma Gandhi envisioned. This is the land of Mahathma and Buddha. This abuse is affecting the young boys. They are college going boys.. this should not be consideration for bail. I need not tell the court, you are the future of our country. The future of the country depends on this generation."

To this, Senior Advocate Desai said, "We got our freedom and we must protect it and save the younger generation from the drug menace. But we must not forget that we fought for a constitution and we fought for the procedure established by law. Everything must happen as per this law."

He highlighted that the cases relied upon by the NCB are from before the 2001 amendment of the NDPS Act; whereas the amendments rationalised the sentencing structure of offences by making it dependent on the quantity of drug, thus making it reformative.

ASG submitted that when considering a case under the NDPS Act, the court has to consider the stringent provisions, scheme and object of the Act.

He cited the judgement of State of Kerala v. Rajesh to argued that bail can be granted only in those case where there are reasonable grounds for believing that accused is not guilty of such offence, and that he is not likely to commit any offence while on bail.

He stated that as per the settled position of law, there cannot be direct evidence of conspiracy as it happens in secrecy and only the conspirator would know.

The international convention observed that all countries should take drug trafficking seriously, as it is affecting the society and the world.

Desai submitted that Khan may be granted bail as it does not affect the ongoing investigation, "as bail doesn't take away their (NCB's) right to continue their investigation."

With respect to seizure of Aryan Khan's phone and his purported incriminatory WhatsApp chats, Desai said, "If they believe that the contents of the mobile are important, they have it. Why curtail my liberty? Nothing has been suggested that if he (Khan) is released on bail investigation will be affected."

He insisted that the amendments to the NDPS Act have rationalised the sentencing structure of offences by making it dependent on the quantity of drug, thus making it reformative.

"You (Khan) are a person at the bottom of the chain, you're a person affected by the drug menace as per the Govt.'s own policy, but instead of reforming you, I will pick you up and put you in prison."

Earlier the ASG referred to the seizure panchnama in which Khan's friend Merchant said that they are going inside the cruise for a 'blast'.

Responding to this, Desai today submitted that there is always a possibility that casual conversations between friends on WhatsApp may appear suspicious. However, the Court must bear in mind one other reality:

"Today's generation have a means of communication, which is English...not the Queen's English…it's sometimes what the older generation will call a torture. The way they communicate is very different. But by no stretch of imagination is this boy involved in illicit intentional drug trafficking."

Earlier, Khan had said in his bail plea that the prosecution is relying solely upon certain alleged WhatsApp chats to entangle him in the proceedings, without the veracity of the chats being established.

He claimed that there is nothing to suggest that these alleged chats have any connection whatsoever to the case that is presently being investigated.

The Court also rejected an intervention application filed by a person claiming to be a social worker, concerned over increased drug menace in the country. The intervenor was also aggrieved by alleged 'special treatment' offered to Aryan Khan with expeditious hearing of the bail application.

The intervention was opposed by Khan's lawyers, who submitted,

"Intervention cannot be allowed. We have already argued our case. ASG is representing the prosecution. Third party cannot intervene in criminal matter…This is just a publicity stunt. Why is he not intervening in other cases and has chosen Aryan Khan's bail application?"

Live Updates posted from the hearing are available here.