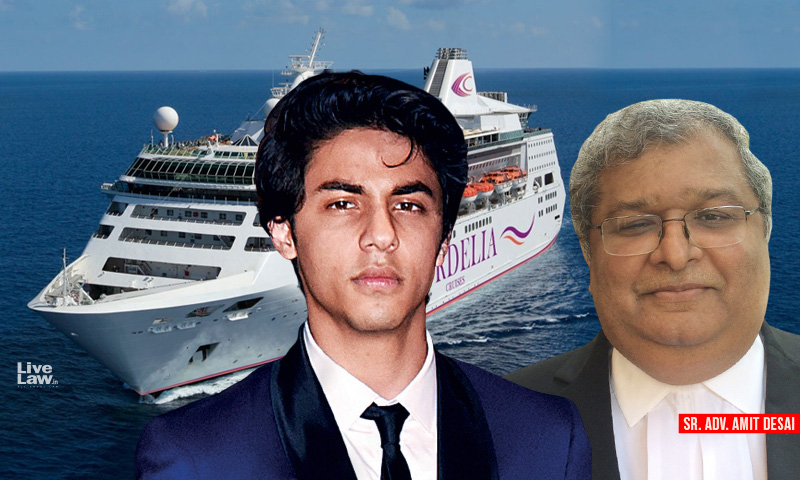 On Thursday, even as counsels for the Narcotics Control Bureau cited India's freedom struggle and the menace that drugs pose to society to oppose bail to actor Shahrukh Khan's son Aryan Khan, his lawyers urged the court to consider that Indian law mandates a reformative approach in dealing with consumers of drugs, who are seen as victims. In his rejoinder arguments, Senior Advocate...

On Thursday, even as counsels for the Narcotics Control Bureau cited India's freedom struggle and the menace that drugs pose to society to oppose bail to actor Shahrukh Khan's son Aryan Khan, his lawyers urged the court to consider that Indian law mandates a reformative approach in dealing with consumers of drugs, who are seen as victims.

In his rejoinder arguments, Senior Advocate Amit Desai cited the 2001 amendment to the NDPS Act which reduced the punishment for consuming small quantities of drugs to one year from five years, a 2017 National Policy on NDPS, and India being a signatory to the 2020 UN convention to remove cannabis from the schedule of dangerous drugs in the NDPS Act.

The NCB has accused Khan of being part of an illicit drug racket and being involved in the distribution of drugs. However, based on drugs seized from his friends, he is merely booked for consumption and possession under sections 8(c), 20b, 27, 28, 29 and 35.

Desai argued that Khan, at most a consumer, would face punishment upto a year.

"You are a person at the bottom of the chain. You're a person affected by the drug menace according to THIS Government's own policy, but instead of reforming you, they will pick you up and put you in prison."

Desai argued that the NCB may have crossed a legal line to convince the court and accuse Khan of illicit drug trafficking.

Refuting NCB's arguments that our freedom fighters did not envision a free country with a drug menace Desai said,

"I say this as an officer of this court and citizen of this country. I don't think there can be a debate that the entire world is fighting the drug menace.We got our freedom, and we must protect it… But we must also not forget that we also fought for a constitution and the procedure of law. Therefore, everything must happen as per this law."

Desai said that by no stretch of imagination is this boy(Aryan Khan) involved in illicit international drug trafficking. And while the investigating agency was free to write to the Ministry of External Affairs and continue with their investigation, he must be granted bail.

Regarding Khan's alleged WhatsApp chats for drugs, Desai said that youngsters today have a very different way of communicating and it would be pertinent to see the context of the chats.

"Today's generation has a means of communication, which is English..not the Queen's English... it's sometimes what the older generation will call a torture. The way they communicate is very different."

Moreover, some of the alleged conversations seem to be from when Khan was abroad, where the same drug might not necessarily be illegal. He said that there is always a possibility that casual conversations between friends on WhatsApp may appear suspicious to officers.

"We need to see, is this youthful banter, friendly gossip, joke...is someone trying to tell him I got this, I did this, were they trying joke laugh about it?"

Additional Solicitor General Anil Singh, the highest law officer for the Centre in the State, refuted the argument by placing the WhatApp chats on record. He said they were simple and could be easily understood. Earlier, the ASG referred to the seizure panchnama in which Khan's friend Merchant said that they are going inside the cruise for a 'blast'.

Desai further argued that the WhatsApp chats are not admissible in evidence if they are not backed with certificate under Section 65B of the Evidence Act.

"The chat messages which they tried to suggest as evidence is an extra-judicial is confession, which is a weak form of evidence. Also, the chats have no Section 65B certificate", he argued.

ASG says that the panchnama clearly shows that the 6 gms of charas found from Arbaaz Merchant's shoe was for their consumption.

"They said 'they' are going to have a blast," please note this. #AryanKhanBail

Desai emphasised that the NCB may be relying heavily on WhatsApp chats, but there was no seizure panchnama where the agency officially took possession of the device. Anyhow, the mobile was with the agency.

"Why curtail my liberty? Nothing has been suggested that if he is released on bail investigation will be affected."

Under section 37 of the NDPS Act, the court must be satisfied of the person's innocence and that he won't commit such an offence in the future.

Desai claimed that this twin condition would not apply to him as the Supreme Court has held that where small quantities of drugs are involved, and imprisonment is up to one year, bail can be granted even in an ongoing investigation.

Desai further said that in another bail application, the Bombay High Court categorically rejected arguments about treating celebrities harshly to set an example.

"The Bombay High Court said 'I do not agree' and that all are equal before the eyes of law," Desai argued.

Since the Bombay High Court and district judiciary won't be functioning for the next five days, the order on Khan's and other bail applications are likely only on October 20.