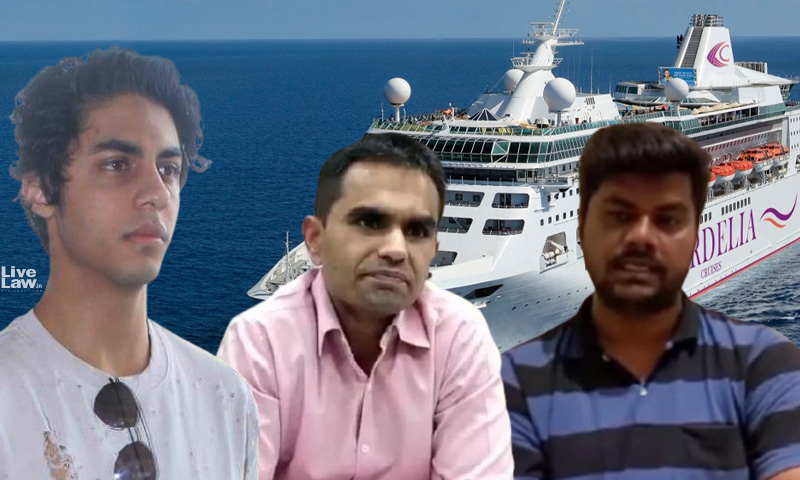 The Bombay High Court on Wednesday refused to entertain the application seeking pre-arrest bail filed by Sanville(Sam) D'Souza, the consultant linked to extortion and payoff allegations against NCB officials and others in the Aryan Khan case.

The Mumbai police has initiated probe into the extortion allegations in the Aryan Khan case, which surfaced last week on the basis of an allegations by one Prabhakar Sail, who claimed that he was forced to sign in blank papers as a panch witness of the case and that he had overheard talks about an extortion plan.

A vacation bench led by Justice S Tavade dismissed the application saying that D'Souza ought to have approached the Sessions Court first. The vacation bench took up the case at around 9.45 PM.

D'Souza's lawyer Advocate Arun Rajput, submitted that his case is similar to that of NCB Zonal Director Sameer Wankhede, with respect to whom the Mumbai Police had assured the Bombay High Court that he won't be arrested without a 3-day prior notice. It was argued that he is not arraigned as an accused and there is no FIR against him. But allegations are made by one Prabhakar Sail in an affidavit to the effect that Sameer Wankhede had taken money in Aryan Khan's case.

However, the bench was not inclined to entertain D'Souza's plea. "Rejected because you did not approach the sessions court first", the bench said.

In his plea D'Souza claimed Gosavi had taken Rs 50 lakh from Shah Rukh Khan's manager Pooja Dadlani but the amount was returned after the NCB took Khan into custody in the case.

D'Souza reiterated that KP Gosavi told him that nothing was found on Khan. Moreover, D'Souza claimed false implication stating that the prime accused were KP Gosavi and his bodyguard witness Prabhakar Sail.

"After coming to know that Kiran Gosavi was a fraud, the applicant's only motive was to recover the money and save his image…Therefore, he connected Sunil Patil (middle man) and Kiran Gosavi and recovered the money and return the said money back to Pooja Dadlani, through her husband."

Regarding Sail's notarized affidavit where he allegedly heard Gosavi tell Sam about settling for Rs 18 crores, of which Rs 8 crores would have to be given to Wankhede, Sam says.

"The applicant saw that Kiran had saved mobile no. as SW2, thereby showing that he was connected with top NCB officials; however, the true caller pop up showed the name of Prabhakar Sail."

The Maharashtra Government set up a Special Investigations team to probe witness Prabhakar Sail's allegations of extortion and payoffs against an NCB official and others, including himself, and that a deal of Rs 18 crore was made for the release of a prominent accused (Aryan Khan).

In the petition filed through Lex Rex Jurist, D'Souza has sought a notice of three days before any coercive action against him and anticipatory bail.

D'Souza fears his arrest by the Special Investigation Team after allegations of extortion surfaced.

Gosavi is currently in custody in a cheating case in Pune, while the State has assured the Bombay HC that they will give Wankhede three days of advance notice if they plan to take action against him.

According to the petition, D' Souza is a stone quarrying business consultant and was contacted by one Sunil Patil (in the business of liasoning ) on October 1.

D'Souza claims that Patil told him about the involvement of celebrities in possessing drugs on the Cordelia cruise.

D'Souza said he gave Patil the contact of NCB officials as Patil asked for it. Later, D'Souza says he learned from KP Gosavi and Manish Bhaushali that Aryan Khan was the influential person apprehended in the case and that Khan wanted to speak to Dadlani.

"Mr Gosavi revealed that Aryan Khan had no drugs in his possession till that time and he is innocent and Kiran Gosavi convinced me he could help Khan get some relief and asked me to connect with Pooja Dadlani," the plea stated.

D'Souza said that while he did not know Dadlani personally, he contacted her through a mutual friend, who is a hotelier and met her at Lower Parel and then Dadlani is alleged to have told him that she is the decision-maker.

"The applicant(D'Souza) introduced Dadlani and KP Gosavi at Lower Parel for the first time along with Chikki Pandey, Mayur Ghule and Kapil Dhole Patil," the petition states.

Dadlani's husband was also present, he claims. D' Souza said that Gosavi showed Dadlani a list in which Khan's name was not present and informed her that Khan had no drugs on him and he could help Aryan Khan "get out of the situation."

D'Souza says that then Dadlani and Gosavi spoke in private.

On October 3, D'Souza said he was "shocked" to learn that an FIR has been registered against Khan. After that he learned from Patil that Gosavi had taken Rs. 50 lakhs from Dadlani through Prabhakar Sail, who is also Gosavi's bodyguard.

D'Souza said it was only after that he learned that Gosavi was a fraud and the money was eventually returned.