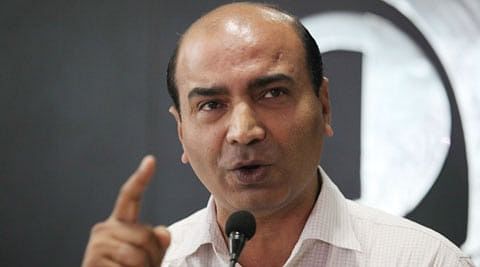 A Delhi Court today allowed the bail plea of former Delhi BJP Spokesperson and Supreme Court lawyer Ashwini Upadhyay, who was arrested and remanded to two days judicial custody in connection with the anti-Muslims slogans raised at an event organized at Jantar Mantar.He has been asked to deposit a surety of Rs. 50,000.The order has been passed by a Court of Metropolitan Magistrate Udbhav...

A Delhi Court today allowed the bail plea of former Delhi BJP Spokesperson and Supreme Court lawyer Ashwini Upadhyay, who was arrested and remanded to two days judicial custody in connection with the anti-Muslims slogans raised at an event organized at Jantar Mantar.

The order has been passed by a Court of Metropolitan Magistrate Udbhav Kumar Jain.

"As far as the offence u/s 153A IPC is concerned except for mere assertion, there is nothing on record to show that the alleged hate speech to promote enmity between different groups was done in the presence or at the behest of the applicant/accused. Even during hearing, this Court has inquired from Ld. APP and so far, there is nothing against the accused in the alleged video," the Court observed.

"It is not the case where there chances that applicant/accused will abscond. Conspiracy is no doubt hatched behind closed doors and that the investigation in the present matter is at nascent stage that however, does not imply that liberty of a citizen be curtailed on mere assertions and apprehension."

The Public Prosecutor argued that there is prima facie involvement of Upadhyay in the incident. He urged the Court to look at the sensitivity of the issue, the area of alleged unlawful assembly (near Parliament) and the (Covid-19) timing. He highlighted that the accused did not have Police permission to assemble and that they paid no heed to the warnings given by the Police officer present on spot.

The PP further submitted that Hate speeches were made and Upadhyay himself has admitted his presence at Jantar Mantar. "There is an admission to this extent. It's not that we arrested someone unconnected to incident," the PP said.

At this juncture, the Court asked the prosecution if Upadhyay was present at the spot when hate speeches were being made.

"All other offences are bailable. We are concerned with Section 153. Was he present at the spot when hate speech was made?" it inquired.

To this, the PP responded that prima facie involvement is visible but specific involvement of Upadhyay has to be investigated.

"That is a matter of investigation. Prima facie, he was one of the main speakers. Section 149 is invoked. It was an unlawful assembly. Please see the conduct overall. First they gather despite rejection of permission. Then they did not listen to Police. Then, when hate speech happened, they did not report it to Police.

Matter is at very nascent stage. We have to see the videos, see who were the organizers. Prima facie his involvement is visible. Specific involvement has to be investigated," he submitted.

Singh argued that Ashwani had visited Jantar Mantar in the morning. The incident, as clear form the video, occurred at 5pm.

"Police can't indiscriminately arrest anybody when there is no plausible suspicion...Do they have any proof about my involvement? Prosecution itself said they have to analyze the videos," Singh argued.

He further stated that prosecution's argument that Upadhyay failed to report the incident to the Police falls flat on its face for the reason that he was not present there at the time. "How will I inform when I was not there?" he asked.

Sankaranarayanan added, "Can we keep a man in custody while Police is yet to examine the videos and determine his involvement? It's prosecution's duty to show his participation."

Advocate Ashwani Dubey told the Court that Upadhyay had written an email to the Police authorities, asking them to arrest the culprits, as soon as he was made aware of the incidents through viral videos circulating on social media. He is also stated to have offered to cooperate with the investigation.

Videos of mob at the gathering shouting slogans openly calling for the killing of Muslims had emerged on Sunday. Upadhyay claimed that the slogans were raised after the meeting organized by him was over. He had organized a meeting calling for the repeal of "colonial-era laws".

Yesterday, Duty Magistrate Tanvi Khurana remanded Upadhyay to two days' judicial custody. Additional Public Prosecutor Atul Srivastava had argued that Ashwini Upadhyay held the gathering despite the denial of permission for the same by the Delhi police. The Prosecutor also submitted that Upadhyay, as a lawyer who has filed several petitions in the Supreme Court, knows the law and he knowingly committed the violations.