"Out Of 4600 Declared Foreigners Only 4 Have Been Deported? Is It Not Your Constitutional Duty?" CJI Pulls Up Assam Chief Secy 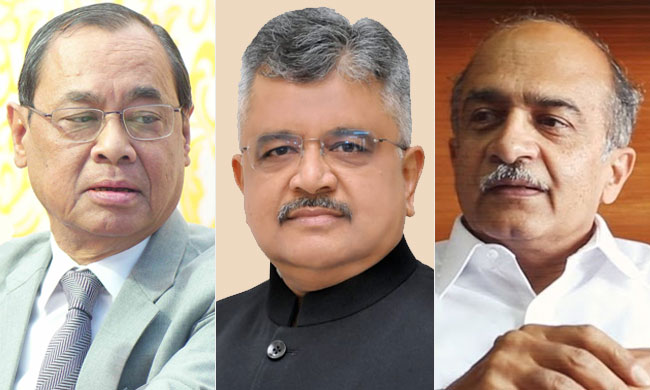 x
Solicitor General Tushar Mehta requested the court to defer the hearing to after April 23 once the elections in the state of Assam have been concluded, suggesting that the apex court’s observations could have a crucial impact.

The Supreme Court on Tuesday asked the state of Assam to furnish on affidavit the course of action it proposes to adopt to release those immigrants declared as foreigners who have been hauled up in its detention centres for years. The bench headed by Chief Justice Ranjan Gogoi posed a series of tough questions to the state's Chief Secretary who was present in court pursuant to the...

The Supreme Court on Tuesday asked the state of Assam to furnish on affidavit the course of action it proposes to adopt to release those immigrants declared as foreigners who have been hauled up in its detention centres for years.

The bench headed by Chief Justice Ranjan Gogoi posed a series of tough questions to the state's Chief Secretary who was present in court pursuant to the court's orders.

"The total number of declared foreigners since 1985 is 1 lakh 12 thousand. While the number for the first thirty years is about 65,000, just in the last 4 years from 2015, the number has reached 46,000...You are taking pride in this big leap? This is your self-praise- significant improvement in the disposal of cases? You have detected 46,000 foreigners since 2015 but there are only 2,000 persons in the detention centres? Where are the other 44,000?", inquired the Chief Justice.

"Between 2013 and 2019, 166 persons have been deported back, out of which 162 are Convicted Foreigners and only 4 are Declared Foreigners?

Out of 46,000 declared foreigners, only 4 have been deported? It is your solemn duty by the Constitution to deport all those who are so declared by a court or a quasi-judicial body! Is your government being run in accordance with the Constitution?", pressed Chief Justice Gogoi.

When the Chief Secretary hesitantly replied that 65-70% of the declarations as a foreigner are on account of ex-parte orders of the Foreigners Tribunals when the requisite documentation is lacking, the Chief Justice called him out for beating around the bush-

"Who is asking you the percentage of ex-parte orders? We want to know where those 44000 are and what you are doing to trace them?"

When the state official said that they "Should be in local places", the Chief Justice remarked, "They are Foreigners. They are not entitled to be there!"

When the Chief Secretary conceded that the government's track record in tracing the foreigners as well the performance of the task-force in identifying the declared foreigners who have merged with the local population has not been satisfactory, Chief Justice Gogoi asked him to place these statements on affidavit-

When the Chief Justice probed again why only 4 have been deported, the Secretary sought to advance, "We got hold of 2000 (out of 46,000) since 2015 and 100 applications have been filed...We are committed to monitor on these aspects..."

"You do what you want. You know your duties. You are running the state. If there is a failure, we will state it...there is no larger question. The question is very short. What have you done to trace the 44,000?", repeated the Chief Justice.

"We have issued directions to the police to file FIRs under the Passport Act and the Foreigners Act and for the attachment of property. Once the FIR is lodged, the biographic comes on the Crime and Criminal Tracking Network & Systems (CCTNS). Wherever they apply for passports or a government job, the verification by the CCTNS will be a red flag..."

"He is not answering because he can't say the problems with the functioning of the foreigners tribunals. The reason why people are not deported is that these declared foreigners are claiming to be Indian citizens. There are people in detention for 10 years, 99% of whom are declared foreigners and the government couldn't even deport them..."

The Chief Secretary advanced that almost 3.8 lakh people not included in the NRC have not filed any cases and in respect of these people identified in the NRC exercise the biographic and bio-metrics have become very essential. When Justice Sanjeev Khanna inquired if any of these persons are on the electoral rolls, he responded that presently some 1 lakh are.

"The final NRC is to be published on July 31. How many Foreigner Tribunals do you see necessary in view of those whose claims to the NRC were not allowed?", posed the Chief Justice.

The state officer replied that they have moved the Ministry of Home Affairs with a 900 crore-proposal for sanction of 1000 Tribunals for which they seek to hire contractual staff at the cost of Rs. 90 lakh per tribunal.

Noting that the Presiding Officers of these Tribunals have to be judicial officers, when the Chief Justice inquired where they proposed to find 1,000 Presiding Officers, The Secretary said that they have written to the Gauhati High Court in this behalf.

"Where will the High Court get 1000 presiding officers by August? Because once a person is not included in the NRC, he will apply. Have you given it a thought? Writing to the High Court is not enough...", remarked Chief Justice Gogoi.

As the Chief Secretary began to say that they shall have a meeting next week, the Chief Justice repeated with incredulity, "Meeting?!", before proceeding to reflect, "These judges will be tenured appointments. Which advocate or retired judge will come to work for three years? Work out these issues! That is governance!"

The Chief Secretary averred that they are considering whether retired government officers who have undertaken some quasi-judicial work could be considered to man these Tribunals, and that a 50 crore-proposal for an integrated IT forum for digitization of NRC cases and deportation requests has also been forwarded to the Home Ministry.

At this juncture, Solicitor General Tushar Mehta requested the court to defer the hearing to after April 23 once the elections in the state of Assam have been concluded, suggesting that the apex court's observations could have a crucial impact.

As the bench agreed to the adjournment, Mr. Bhushan contended that the only objection the government may have to releasing the detenues is they may disappear and not be present when required. To ameliorate this, he ventured that they may be released on the condition of furnishing 2-3 sureties who would be Indian citizens, and may even be required to report to the local police station every fortnight or every month. "The day before yesterday, one man died in the detention centre!", he urged.

Favouring the recommendation that the detenues be released on a surety, the Chief Justice weighed in,

"Some 900 people have been in these centres since 2009. How long will you keep them? The living conditions are like those of the district jails. In your photographs, you depict 5 people before a TV, 5 children on a carom board, 10 children attending an exercise which appears to be a classroom? This is not a place where anybody would like to be"

Even as the SG conceded that while most of these persons have been in detention since 2-3 years, some have been in custody for much longer, and that they cannot simply be pushed away, Chief Justice Gogoi insisted that the state contemplate the ways and means they can be released.