"Attempt of FIR Is To Create A Chilling Effect For News Channels"; ABN Andhrajyothi And TV5 Channels Move Supreme Court Seeking Quashing of FIR With Charges of Sedition 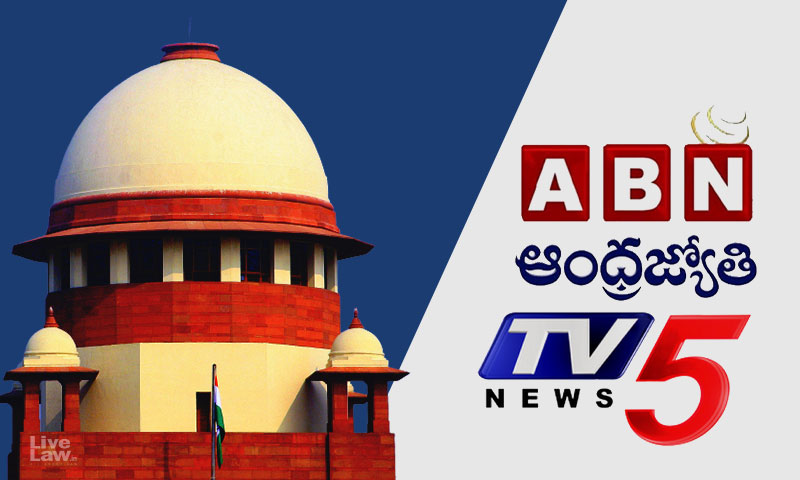 News channels TV5 and ABN Andhrajyothi based out of Andhra Pradesh have moved the Supreme Court seeking quashing of the FIR registered against them by the Andhra Pradesh Police on the charges of sedition as well as an order restraining the Respondents from taking any coercive action against them.

The impugned FIR was registered against the Petitioners on the basis of allegedly offensive speeches made by YSR MP K. Raghu Rama Krishna Raju, wherein he criticized the ruling party on a segment hosted by the Petitioner's channel.

Andhra Based News channel "TV5" moves Supreme Court seeking quashing of the FIR under Sections 124A, 153A, 505 r/w 120B of the Indian Penal Code by Andhra Police against it pic.twitter.com/5q2UZYk7Z4

"…the only vague allegation in the FIR against TV5 is that some of the offending speeches of Mr. Raju were made on its channel. However, the FIR fails to identify such offending speech, or the 'premediated' and 'organised' time slot when they were made".

Apart from the submission that the FIR fails to make out the offences against the Petitioners, it has been further averred that the Petitioners have been constrained to approach the Supreme Court in light of the YSR MP being reportedly arrested in the pursuance of the impugned FIR and suffering custodial torture at the hands of the Respondent authorities.

The pleas argue that the only allegation in the impugned FIR against the Petitioners channel is that they alloted "premediated" and "organized" slots to Mr. Raju, which according to the impugned FIR evinces a meeting of minds amongst the accused persons.

"The Petitioners verily believe that if this Hon'ble Court does not interject on an urgent basis, the Petitioner shall be meted out the same treatment".

The plea also contends that the intention of the impugned FIR to criminalise the act of airing views of a sitting MP, who is a public figure, is clearly violative of the Petitioner's right to freedom of speech and expression, and also creates a chilling effect for media houses in the State.

"It is submitted that the attempt of the FIR is to create a chilling effect for news channels in the State so that every news channel is wary of hosting any content which is critical of the government. By filing a vague FIR and abusing the process of law, the State intends to silence its critiques and the media, which is discharging its duty," adds the plea.

It has further been submitted that the FIR fails to establish any nexus of TV5 to any of the alleged offences, and that the premise of the FIR has neither been substantiated nor can be termed as a criminal act because public figures are often hosted at designated time slots on news channels.

The plea concludes on the note that the purpose of the mala fide FIR is to curb dissent in the State, and in light of the above, it prays that those directions should be issued to restrain the Respondent from taking any coercive action against the Petitioner's management and employees, and to quash impugned FIR as well as the Inquiry Report.

In related news, today, the Supreme Court directed that YSR Congress MP K Raghu Rama Krishna Raju, who has been arrested by Andhra Pradesh Police in a sedition case over his critical remarks, be taken to Army Hospital, Secunderabad for medical examination with respect to allegations of custodial torture.

A Division Bench comprising Justices Vineet Saran and BR Gavai passed the order in a Special Leave Petition filed by Raju against the order of the Andhra Pradesh High Court which refused to entertain his bail application. The High Court had declined interference saying that Raju should first move the Sessions Court for bail.