Attorney General Says Sombebody Is Bent Upon Ensuring That He Does Not Appear In Maharashtra Wakf Tribunal Case; Narrates "Startling Events" In Letter To SC 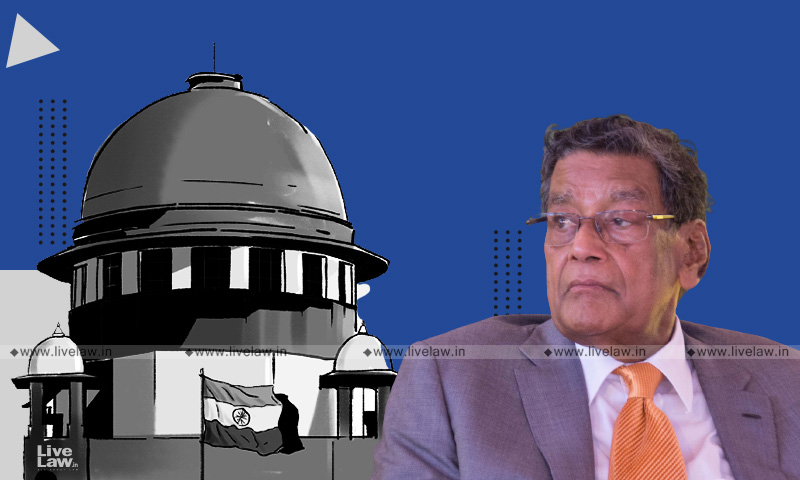 Attorney General for India KK Venugopal has written another letter to the Supreme Court in the Maharashtra Wakf Tribunal matter, reiterating his complaint that there has been an attempt to ensure that he does not appear in the matter.

Last week, AG had informed the Chief Justice of India that Maharashtra State Board of Wakfs changed his Advocate-on-Record and other lawyers who had been appearing for the Board till then. Taking strong exception to such move, the AG had said that contempt of court action should be taken against the Board as the last minute change of counsel would amount to interference with the administration of justice.

Chief Justice of India NV Ramana had then taken serious note of the AG's grievance and pulled up the Board's counsel, sternly saying "this is not the way to behave with the Attorney General".

Now, ahead of the hearing tomorrow, AG Venugopal has written to to the Secretary General of the Supreme Court seeking an adjournment in the case saying that he is yet to recover from COVID-19 after effects. The AG also said that the arguments on the legal issues in the matter be heard only after the contemnors "purged themselves of the contempt".

In the letter of adjournment, the AG has narrated the "startling series of events", which make him believe that somebody is "bent upon ensuring that the Attorney General does not argue this case".

The matter is a batch of appeals challenging a Bombay High Court verdict, in which the Supreme Court has agreed to examine the legal issue whether every charitable trust created by a Muslim person would automatically become a Wakf to be governed under the Wakf Act or can it become a public trust.

The AG stated that on July 14, Senior Advocate Harish Salve, appearing for the private parties in the case, had mentioned the matter before the Chief Justice of India for urgent mentioning, and the CJI agreed to hear the matter the following week.

"By looking at the issue one would find it difficult to find any urgency and what prompted the matter to be taken up for urgent disposal. Nonetheless, in view of the eminence of the senior counsel mentioning the matter as being urgent, the Court directed the matter to be listed for hearing," the AG recorded in his letter.

On July 18, when the matter was listed, the AG told the bench that there were 57 connected appeals. Next week, on July 25, all the 57 appeals were listed and Salve requested for an urgent hearing. As both the AG and Salve were appearing as opposite parties in a part heard matter before the Delhi High Court, they agreed on August 10 to be the next date of hearing.

Meanwhile, on July 27, the AG tested positive for COVID. On the same day, he received an email from EC Aggarwala and Co, the Advocate-on-Record of Salve, that the matter will be mentioned to advance the hearing from August 10 to an earlier date. On July 29, Salve mentioned the matter for being advanced to August 2. The CJI then said that he will see the state of the health of AG on August 2 and will decide on hearing the matter.

"Thereafter, however, came a series of events which were startling," the AG said in this background.

On July 30, Special Counsel in the matter, Javed Shaikh, who was instructing Venugopal was orally informed from the State government had decided to remove him in the Waqf matter. However, he received no formal intimation regarding the same. The AG said that it was shocking as no reason was given.

On July 31, Mr.Sudhanshu Choudhary, the Advocate-on-Record in the matter, was asked to give NOC to change the AOR of the Board as Mr.Shashibhushan P Adgonkar.

Subsequently, on August 1, Shaikh received a letter from the Maharashtra State Board of Wakfs cancelling his appointment in the matter, who, in turn informed Senior Advocate Sankaranarayanan(who was assisting the AG) that he could no longer brief the latter in the matter.

"Looking at the entirety of what has emerged, it seems that whoever is behind the events that have transpired, whether it is the beneficiaries of the transfer or anyone else, is bent upon ensuring that the Attorney General does not argue this case," the AG stated.

While seeking adjournment, the AG also said : "In this background if there is contempt involved in the case, which I myself could initiate under Section 15 of the Contempt of Courts Act, 1971, so long as I am the Attorney General, the alleged contemnors may have to purge themselves of the contempt before addressing arguments in relation to the legal issues in the matter".

AG, in his letter further stated that he received no instructions to appear after the change in advocate on record.

The AG, in his earlier letter had said that removing counsel representing the parties on the eve of the hearings was a serious, uncalled for, unwarranted attempt to interfere with the administration of justice, and was clearly contempt of court.
The AG's earlier letter addressed to the Registrar (Judicial), the AG said that several Advocates representing the Maharashtra State Board of Wakfs, including himself, have been removed from the case, purportedly to interfere with the administration of justice.
When the matter had come up for hearing last week, the AG had informed the Court of all the developments. This prompted the Chief Justice of India to take serious note of the grievance raised
"This is not the way in which you have to behave with the AG..this is not proper", CJI told the Board's counsel.
"Yesterday there was a letter that I am not representing and I have been removed. So far this has never happened", the AG said.
Case Title: Maharashtra State Board Of Wakfs V. Shaikh Yusuf Bhai Chawla & Ors.| Special Leave to Appeal (C) No(s). 31288-31290/2011