Ayodhya Hearing Live-Streaming: SC Agrees To Consider It On Administrative Side 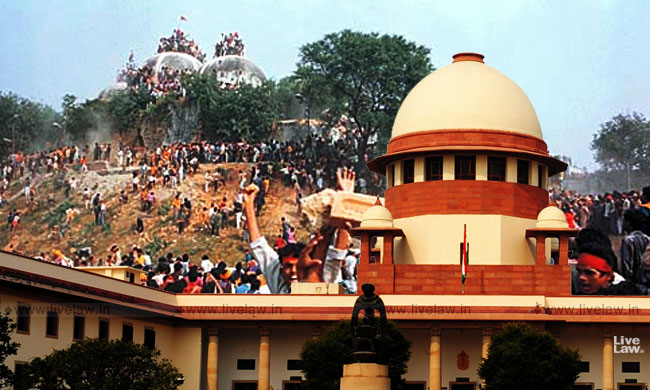 The Supreme Court on Monday declined to issue any immediate directions for the video-recording or the live streaming of the proceedings in the Babri Masjid-Ram Janmabhoomi case which is scheduled to be heard from tomorrow. With Chief Justice Ranjan Gogoi being on leave, activist K. N. Govindacharya's plea was mentioned by Senior Advocate Vikas Singh before Justice S. A. Bobde, who is also...

The Supreme Court on Monday declined to issue any immediate directions for the video-recording or the live streaming of the proceedings in the Babri Masjid-Ram Janmabhoomi case which is scheduled to be heard from tomorrow.

With Chief Justice Ranjan Gogoi being on leave, activist K. N. Govindacharya's plea was mentioned by Senior Advocate Vikas Singh before Justice S. A. Bobde, who is also a member of the five-judge bench which shall decide the contentious Ayodhya matter.

"The hearings can be recorded for the time being, even if they are not streamed immediately at this stage...", suggested Mr. Singh.

"We are not sure if we have the requisite equipment. This is an institutional issue. It cannot be considered judicially...We can deliberate on this on the administrative side...It cannot commence from tomorrow...", observed Justice Bobde.

Providing "virtual access to courtroom proceedings as they unfold", the Apex Court had in September, 2018 opened its doors for live streaming of cases of constitutional and national importance, barring those involving juveniles, cases of sexual assault, matrimonial issues, being argued for final hearing before a Constitution Bench. [https://www.livelaw.in/india-to-get-virtual-access-to-courtroom-proceedings-read-sc-directions-on-live-streaming/]

Former Rashtriya Swayamsevak Sangh (RSS) ideologue K.N. Govindacharya on Saturday moved the Supreme Court for live streaming of the day-to-day proceedings in the Ayodhya-Babri Masjid title suit case which is scheduled to commence from August 6. [https://www.livelaw.in/top-stories/ayodhya-babri-land-dispute-former-rss-leader-seeks-live-streaming-of-sc-hearing-146902]

After the panel headed by former SC judge Justice FMI Kalifulla submitted a report on Thursday about the mediation proceedings' failure in resolving the Ayodhya dispute, the five judge Constitution Bench had on Friday decided to begin day-to-day hearingsfrom August 6.

According to the petition, despite around a year having gone by, the implementation of the Supreme Court ruling issue yet to take place.

India has the means to arrange for live streaming of the Ayodhya matter, the plea said.

It is claimed that a letter was already written to government of India as well the Supreme Court in January this year for livestreaming of the matter.

The petitioner also states that the Constitution contains pictures of Lord Ram and hHence, live streaming of Ayodhya case will fulfil "Constitutional Patriotism".

"..considering the fact that the original copies of the Constitution itself detail pictures of Lord Ram. It is submitted that the live streaming of proceedings before this Hon'ble Court will also fulfil the mandate of constitutional patriotism."

The bunch of appeals in SC is against the 2010 verdict of Allahabad High Court which ruled that the 2.77 acres of Ayodhya land be divided into 3 parts, with 1/3 going to the Ram Lalla or Infant Rama represented by the Hindu Maha Sabha for the construction of the Ram temple, 1/3 going to the Islamic Sunni Waqf Board and the remaining 1/3 going to a Hindu religious denomination Nirmohi Akhara.