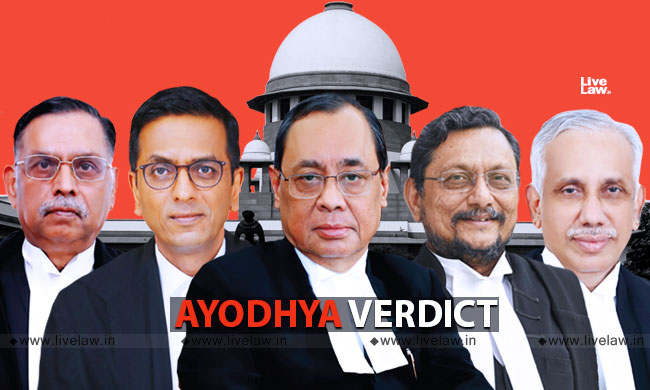 The Akhil Bharat Hindu Mahasabha on Monday filed a review petition against the direction in the November 9 verdict in the Ayodhya-Babri Masjid case for allotting 5 acres of land to UP Sunni Waqf Board for construction of a mosque as a "compensatory measure".According to the Hindu body, the structure at the site cannot be termed a 'mosque', as there was no evidence submitted by the Muslim side...

The Akhil Bharat Hindu Mahasabha on Monday filed a review petition against the direction in the November 9 verdict in the Ayodhya-Babri Masjid case for allotting 5 acres of land to UP Sunni Waqf Board for construction of a mosque as a "compensatory measure".

According to the Hindu body, the structure at the site cannot be termed a 'mosque', as there was no evidence submitted by the Muslim side to establish that the land was dedicated to Almighty for construction of a mosque.

"There is no evidence that any waqf was created, land was dedicated to almighty and any mosque was constructed. Therefore, there is no fact, ground or basis to declare the building in question as mosque or treating that Muslims have any religious right over any part of the disputed building complex", the petition said.

The review petition made copious references to the 'addenda' of the main judgment to state that there was age old belief that the land was the birth place of Lord Ram. Since the land always vested with the Hindu deity, Muslim parties cannot exercise any right over it, stated the Mahasabha in the plea.

"From the material on record and the finding arrived at by the Hon'ble Court it is crystal clear that Hindus from the time immemorial have been worshipping the birth place of Lord Ram even after construction of disputed structure which termed by Muslims as mosque. Even if by use of force and taking advantage of the might any construction was raised at the religious place of Hindus that will not confer any right to Muslims to exercise right to religion over the religious and sacred place of Hindus".

Therefore, the review petition urged the Court to change the references to 'Babri Masjid' and 'mosque' as the 'disputed structure'.

Set aside findings of criminal acts by Hindu parties

The review petition further sought to set aside the findings made by the Court that Hindu parties committed illegalities against the mosque in 1934, 1949 and 1992.

"It is relevant to mention that Hon'ble Court has not called upon Hindus to clarify their position for the actions taken in the year 1949 and in 1992. In these circumstances the observations made against Hindu community may be expunged".

Regarding the destruction of the mosque in 1992, the review petition stated that it happened when the patience of lakhs of devotees who had assembled for a "symbolic karsewa" broke due to the delay in pronouncing of judgment in the case.

"The Hon'ble Court may also set aside the finding mentioned in paragraph 788 (XVIII) of the judgment to the extent that the damage was caused to the mosque in 1934, mosque was desecrated in 1949 and mosque was demolished on 6.12.1992", the petition stated.

The review petitioners also sought a clarification that references about the criminal acts of Hindu persons will not affect the ongoing trial in the criminal cases relating to the demolition of mosque.

It is further argued in the petition that allotment of public land for construction of mosque is against the principles of secularism.

Stating that the provisions of Places of Worship (Special Provisions) Act 1991 were not involved in the case, the review petitioner sought a further declaration that the observations made by the Court regarding the relevance of the Act should be declared as non-binding.

The Muslim side has filed review petitions against the verdict contending, inter-alia, that the relief to Hindu parties amounted to rewarding illegal acts of trespass and demolition committed against the mosque. The judgment is mostly based on Hindu faith than secular principles, contended another set of review petitions filed by persons backed by the All India Muslim Personal Law Board.