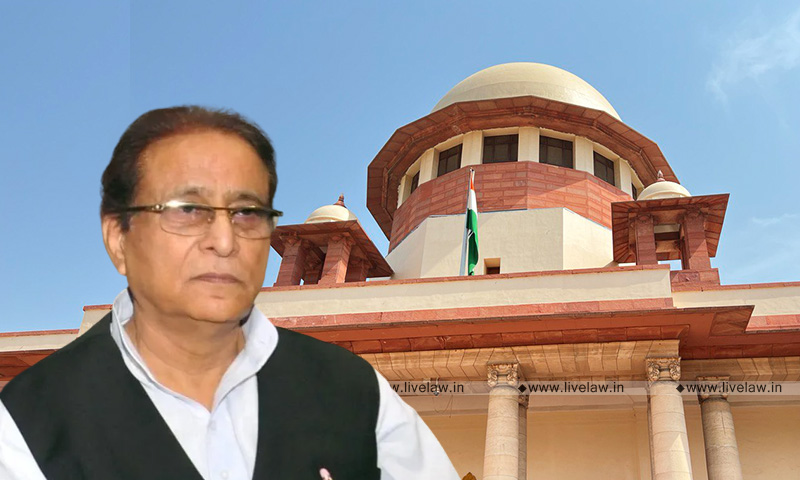 The Supreme Court on Friday stayed the directions issued by the Allahabad High Court while granting bail to SP leader Azam Khan that the District Magistrate should take possession of the premises of the Mohammed Ali Jauhar University, which is run by a Trust headed by Khan.

The vacation bench of Justices DY Chandrachud and Bela M Trivedi was of the opinion that, prima facie, the said conditions imposed for grant of bail are disproportionate and have no reasonable nexus with the object of securing the presence of the accused or to see to it that the trial is not impeded in any manner.

In the impugned order, the High Court, while granting bail to Azam Khan in an alleged case of grabbing Enemy Property and using it for the construction of the Mohammad Ali Jauhar University, had directed the Rampur District Magistrate to take possession of the property attached to the campus of Jauhar University by June 30, 2022, and raise a boundary wall with barbed wire around it.

The Court Bench found the condition pertaining to granting possession of the disputed property to the District Magistrate, Rampur, to be disproportionate.

"In para 36 of the Impugned Order the High Court opined that bail was granted to the petitioner on the ground of age and his medical condition apart from the fact in "most of the cases in which the prosecution were initiated against him he has been bailed out". However, prima facie, the conditions imposed for grant of bail are disproportionate and have no reasonable link with securing the presence of accused and to see trial is not impeded. In para 40 the Single Judge has observed that the present order may sound like a decree of civil court deciding title of the land. Yet, prima facie, while imposing conditions HC has exceeded the settled parameter exercising jurisdiction under S. 439 of CrPC. Issue notice. Till the next date of listing the following directions of HC in para 39 shall remain stayed ".

The High Court had orderd as follows :

"...the District Magistrate, Rampur being a representative of Custodian/Administrator of Evacuee/Enemy Property is directed to hold a measurement of the landed property in dispute which is center dispute of this issue admesuring area 13.842 hectares village Singhan Khera, Pargana and Tehsil-Sadar, District Rampur and thereafter raise a boundary wall and barbed wire around it and take the actual physical possession of the property in dispute on behalf of Administrator of Evacuee Property Mumbai latest by 30.6.2022".

"The Custodian Evacuee Property Mumbai is requested to hand over the property in dispute to some para military forces for their training purposes, as already done in the year 2014. The interim bail/regular bail shall be subject to the following further conditions"

The Bench was also apprised by Mr. Sibal that notices have been issued to demolish the buildings in the concerned property.

"Now see what is happening. They want to demolish the building."

Noting that the said notices were issued pursuant to the bail conditions imposed by the High Court which has now been stayed, the Bench said Khan can approach the Sub-Divisional Magistrate apprising them of the present order of the Apex Court -

"They have relied on the HC order. You can show this to the Sub-divisional Magistrate. This is exactly what we have stayed."

The FIR in the instant case was filed against Azam and others alleging that during the Partition of the Country, one Imamuddin Qureshi went to Pakistan and his land was recorded as enemy property, but Khan, in collusion with others, grabbed the plot and on that very property Mohammed Ali Jauhar University was built by a trust headed by Khan.

On April 18, the Supreme Court had stayed the order passed by the District Magistrate to take over nearly 400 acres of land allotted to the University.

It may also be noted that the Top Court on May 19 had while invoking its power under Article 142 of the Constitution of India had granted interim bail to Khan in a forgery case and directed him to file an application for regular bail before the competent court within two weeks. The Court had further said that the interim bail would operate till the court decides the application for regular bail. "If the court's decision is against the grant of regular bail, the interim bail will operate for a further period of two weeks," the Court had added.