Before Providing Reservation In Promotions To A Cadre, State Obligated To Collect Quantifiable Data Regarding Inadequacy Of Representation Of SC/STs : Supreme Court 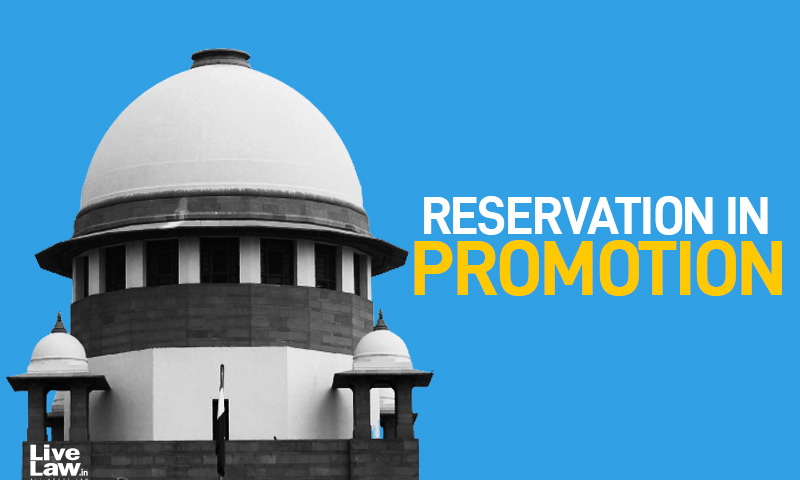 On Friday, the Supreme Court delivered the judgment in the issue relating to reservation in promotions. The Apex Court has set out certain guiding principles in relation to reservation to promotion, while leaving some to be determined by the Centre and State Governments on a case-to-case basis. A Bench comprising Justices L. Nageswara Rao, Sanjiv Khanna and B.R. Gavai has...

On Friday, the Supreme Court delivered the judgment in the issue relating to reservation in promotions. The Apex Court has set out certain guiding principles in relation to reservation to promotion, while leaving some to be determined by the Centre and State Governments on a case-to-case basis.

A Bench comprising Justices L. Nageswara Rao, Sanjiv Khanna and B.R. Gavai has divided the broader issues common to the batch of petitions, pertaining to the issue of reservation in promotion, filed before it, in six categories and decided those issues without getting into the merits of the individual cases for the time being.

The Supreme Court in Indra Sawhney And Ors. v. Union of India And Ors. 1992 Supp (3) SCC 217 held that Article 16(4) of the Constitution of India does not provide for reservation in proportion. It directed the reservation granted in promotion in Central and State services to continue for a period of five years. Article 16(4-A) was inserted into the Constitution to provide for reservation in promotion as the State was of the view that there still existed inadequacies of representation of Scheduled Castes and Scheduled Tribes in public employment.

It so happened that, often the reserved vacancies for the present year could not be filled due to non-availability of candidates and the same was carried forward. Indra Sawhney (supra) clarified that reservation under Article 16(4) cannot exceed 50%. In compliance an Office Memorandum was issued on 29.08.1997 to make the 50% limit applicable to current as well as backlog vacancies. This arrangement was short lived, since upon consideration of representation from the SC/ST community Article 16(4-B) was inserted which clarified that the vacancies carried forward shall not be clubbed with the current vacancies to determine the ceiling of 50%.

The validity of Articles 16(4-A) and 16(4-B) were challenged and upheld as enabling provisions in M. Nagaraj And Ors. v. Union of India And Ors. (2006) 8 SCC 212. The Apex Court held that, though States were not bound to make reservations in promotion, if they chose to do so, in addition to compliance under Article 335, they have to collect quantifiable data to show backwardness of the class and inadequacy of their representation in services. Upon challenge, M. Nagaraj was sent to a larger bench, and finally the request to refer it to a 7-Judge Bench was rejected in Jarnail Singh And Ors.v. Lachhmi Narain Gupta And Ors. (2018) 10 SCC 396. However, the Supreme Court set aside the requirement to collect quantifiable data to show backwardness of the SCs and STs as their backwardness had already been established in Indra Sawhney. In the meanwhile, different High Courts have considered matters pertaining to reservation in promotion being violative of law laid down in Nagaraj, which is the subject matter of challenge in the present batch of petitions.

The Six Broad Points Culled Out For Determination

Yardstick For Arriving At Quantifiable Data

"…we are of the opinion that no yardstick can be laid down by this Court for determining the adequacy of representation of SCs and STs in promotional posts for the purpose of providing reservation."

The Court was of the opinion that there is no fixed yardstick to identify equality, justice and efficiency and would depend on facts and circumstances of a particular case. Placing reliance on M. Nagaraj (supra) and Jarnail Singh (supra) the Court was of the opinion that the Governments ought to be given the liberty to determine the relevant factors for the determination of inadequacy in representation. Referring to Asif Hameed And Ors. v. State of Jammu And Kashmir And Ors. 1989 Supp (2) SCC 364 and P. Ramachandra Rao v. State of Karnataka (2002) 4 SCC 578, it was emphasised that it is not proper for Courts to issue advisories to the Executive in matters which are exclusively within their domain.

The Court stated that "Before providing for reservation in promotions to a cadre, the State is obligated to collect quantifiable data regarding inadequacy of representation of SCs and STs".

"Collection of information regarding inadequacy of representation of SCs and STs cannot be with reference to the entire service or 'class'/'group' but it should be relatable to the grade/category of posts to which promotion is sought. Cadre, which should be the unit for the purpose of collection of quantifiable data in relation to the promotional post(s), would be meaningless if data pertaining to representation of SCs and STs is with reference to the entire service."

The Court clarified that as per the decision of the Court in M. Nagaraj (supra) and Jarnail Singh (supra), the collection of quantifiable data regarding inadequacy of representation is relatable to the concerned cadre. The Court also noted that the right to be considered for appointment can only be claimed with respect to post in cadre and the cadre-strength is always measured by the number of posts comprising the cadre.

The Office Memorandum dated 02.07.1997 issued by the Ministry of Personnel, Public Grievances and Pensions, Department of Personnel and Training, Government of India defines cadre as under -

""cadre", for the purpose of a roster, shall mean a particular grade and shall comprise the number of posts to be filled by a particular mode of recruitment in terms of the applicable recruitment rules.

Referring to an array of judgments including A.K. Subraman And Ors v. Union of India And Ors. (1975) 2 SCC 319, Dr Chakradhar Paswan v. State of Bihar And Ors. (1988) 2 SCC 214, K. Manickaraj v. Union of India (1997) Union of India v. Pushpa Rani And Ors. (2008) 9 SCC 242, the Court observed that civil posts under the Government are organized into different services. A service constitutes classes/groups of posts, which is bifurcated into grades and these are further divided into several cadres. As per Fundamental Rule 9(4) "cadre" has been defined to mean the strength of a service or part of a service sanctioned as a separate unit. Therefore, the entire service cannot be considered as a cadre for the purpose of promotion.

Proportionate Representation As Test Of Adequacy

"...we are not persuaded to express any opinion on this aspect. It is for the State to assess the inadequacy of representation of SCs and STs in promotional posts, by taking into account relevant factors."

The Court noted that in R.K. Sabharwal And Ors. v. State of Punjab And Ors. (1995) 2 SCC 745, it had approved State Governments to take the total population of a particular Backward Class and its representation in State services to demonstrate the inadequacy. However, following in the footsteps of the ratio in M. Nagaraj (supra) as upheld in Jarnail Singh (supra), the Court bestowed the State with the responsibility to determine the relevant factors to determine inadequacy.

"As regards review, we are of the opinion that data collected to determine inadequacy of representation for the purpose of providing reservation in promotions needs to be reviewed periodically. The period for review should be reasonable and is left to the Government to set out."

The Court observed that the parties almost unanimously submitted that the concerned data should be reviewed periodically. Though the Court agreed to the proposition, it refused to set out a time period and left it for the Government's consideration.

Prospective Operation Of The Judgment In M. Nagaraj

"As making the principles laid down in M. Nagaraj (supra) effective from the year 1995 would be detrimental to the interests of a number of civil servants and would have an effect of unsettling the seniority of individuals over a long period of time, it is necessary that the judgment of M. Nagaraj (supra) should be declared to have prospective effect."

The Court noted that in I.C. Golak Nath And Ors. v. State of Punjab And Anr. (1967) 2 SCR 762 the doctrine of prospective overruling was invoked in exercise of Article 142 to restrict the operation of law to only future transactions. It was taken note that the Indra Sawney judgment was prospective in nature to save the previous transactions. Referring to a catena of judgements, the Court opined that Article 142 empowered it to mould the relief to do complete justice. Therefore, to avoid chaos and confusion of retrospective operation that would affect a large number of people, who have availed reservation in promotion without the guiding principles set out in M. Nagaraja (supra), the Court decided to declare that the judgment of M. Nagaraj (supra) was prospective in nature.

"...for the purpose of collection of quantifiable data to assess representation of SCs and STs for the purpose of providing reservation in promotions, cadre, which is a part of a 'group', is the unit and the data has to be collected with respect to each cadre. Therefore, we hold that the conclusion of this Court in B.K. Pavitra II (supra) approving the collection of data on the basis of 'groups' and not cadres is contrary to the law laid down by this Court in M. Nagaraj (supra) and Jarnail Singh (supra)."

In B.K. Pavitra And Ors. v.Union of India And Ors. (2019) 16 SCC 129, it was contended that the data collected by the State of Karnataka to pass a legislature extending reservation in promotion was based on 'group' and not 'cadre'. Therein, the challenge was found to be baseless as no fixed meaning can be assigned to the term 'cadre' in service jurisprudence.

The Court highlighted that the unit for collection of data was set out to be 'cadre' in M. Nagaraj (supra) as well as Jarnail Singh (cadre). It was clarified that the State ought to justify reservation in promotion with respect to the cadre to which promotion is to be made. Taking the data of a 'group' which includes an amalgamation of several cadres would not reflect the correct data. In view of the same, the ratio of B.K. Pavitra (supra) was set aside to the extent that it approved collection of data based on 'groups' instead of 'cadres'.