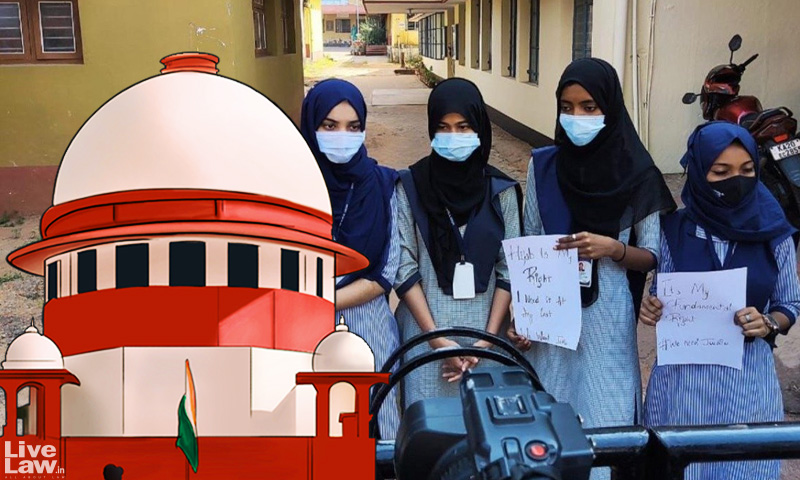 Senior Advocate Huzefa Ahmadi told the Supreme Court on Thursday that the Karnataka Government's decision allowing the ban of hijab in educational institutions has resulted in denial of education to Muslim girls.

He argued that the State's priority should be to ensure that girls are getting educated. "We have a slogan "Beti bachao, beti padhao". Should it not be the priority of the state to ensure education of the girls rather than a misplaced priority on discipline which undermines autonomy and eventually results in denial of education?", he submitted before a bench comprising Justices Hemant Gupta and Sudhanshu Dhulia.

Today was the 10th day of the hearing before the bench on the appeals challenging the Karnataka High Court's judgment which upheld the ban on wearing hijab in educational institutions.

Ahmadi, making rejoinder for petitioners in response to the State's arguments, asked how Hijab is violating discipline or impairing education. If someone seeks to stop the classes in the name of observing religious practice, that would be a good ground to prohibit that observance. However, as far as hijab is concerned, no such case has been shown by the Respondents.

"Uniformity is confused as a fundamental duty. The judgments of this court emphasize on diversity. It is not shown hijab is impairing education or discipline.It is strange that the State which should be concerned about educating girls, is concerned more about discipline and is enforcing this which can lead to denying education to girls", he said.

He cited some documents from RTI which suggest that the Karnataka State Commission for Protection of Child Rights had written to the State on March, stating that Hijab ban in educational intuitions will result in "drop outs". He pointed out that Senior Advocate Kapil Sibal had also cited certain documents which showed drop out of Muslim students after the hijab verdict.

"What does ultimately the State gain if these students are not emancipated? If these girls get a good education, tomorrow they can take a decision on how to dress. Education itself is empowering. This stopping can result in they going back to other education which is not secular. Don't stop this at the threshold."

Ahmadi also referred to several letters of students who say that they are not allowed to enter or write exams.

However, as Advocate General Navadgi raised objection, Court said, "We will go by established practice no fresh documents in rejoinder."

The bench reserved judgment in the case after hearing the petitioners' rejoinder arguments. Detailed report can be read here.