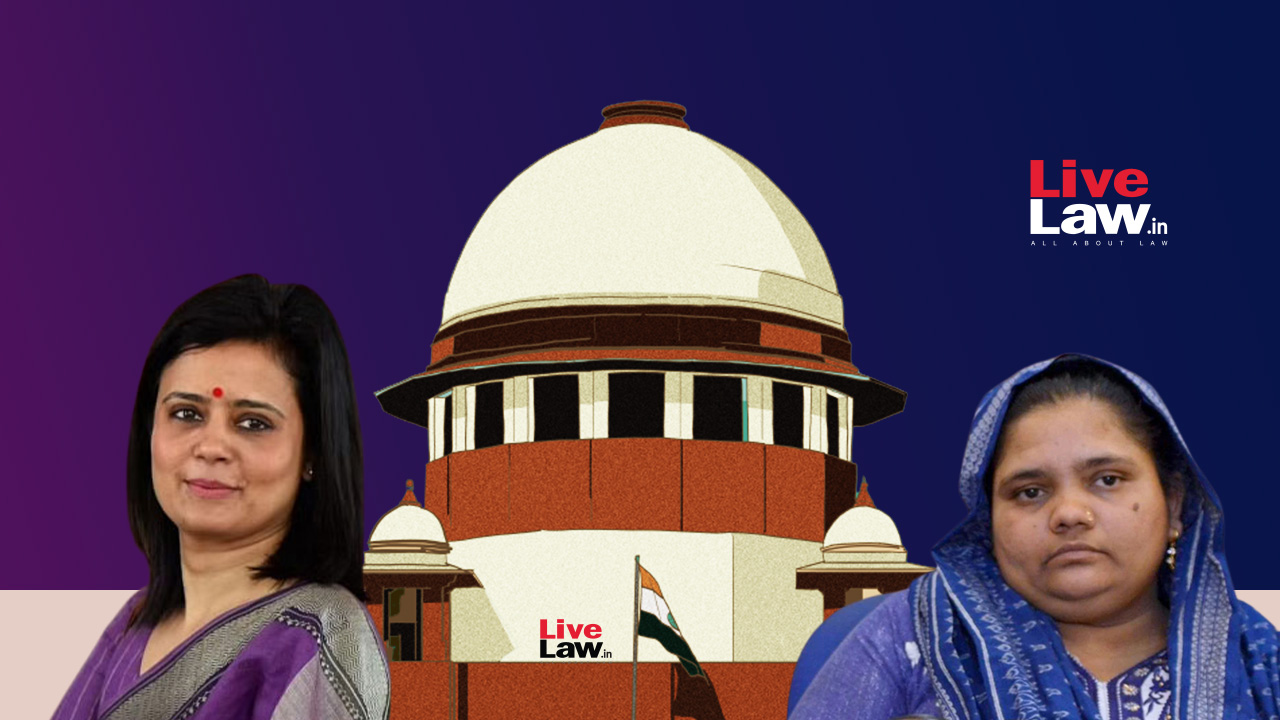 The Supreme Court of India issued notice in petitions filed by TMC MP Mahua Moitra and others challenging the premature release of 11 convicts on remission by the Gujarat government in the Bilkis Bano case for gangrape and murder.Before a Bench of Justices Ajay Rastogi and BV Nagarathna, Advocate Rishi Malhotra, appearing for one of the convicts submitted that the impleading petition was...

The Supreme Court of India issued notice in petitions filed by TMC MP Mahua Moitra and others challenging the premature release of 11 convicts on remission by the Gujarat government in the Bilkis Bano case for gangrape and murder.

Before a Bench of Justices Ajay Rastogi and BV Nagarathna, Advocate Rishi Malhotra, appearing for one of the convicts submitted that the impleading petition was filed only yesterday.

"They have not complied with your Lordships' order that we should Impleaded."

"But why did you file for adjournment", the Bench was quick to ask.

"They have to implead us", he replied.

As the matter progressed, the Court asked if notice was required to be issued in the second matter if it's a similar petition, arising out of the same cause of action.

At this stage, Malhotra submitted that multiple petitions were being filed by people with no 'locus'.

"I am against this impleadment business. They also have no locus. They are just multiplying petitions and impleadment applications in every matter."

But matters can't be disposed of without issuing notice, Justice Nagarathna pointed out.

The Court then issued notice to Malhotra in the matter and also asked him to take instructions if he could appear for the other convicts as well. The Court also directed the petitioners to serve a copy to both him and the state of Gujarat. The Bench also directed the State government to place all relevant documents on record, including the remission order.

The Court granted two weeks' time to file a counter affidavit to the convicts, and one week's time to file rejoinder to the petitioners.

As of now, there are two petitions challenging the remission of sentence by the State Government of those who were sentenced to life imprisonment for the gangrape of Bilkis Bano and murder of her family members during the 2002 post-Godhra riots.

On August 25, the Top Court had issued notice in this petition challenging the order of Gujarat Government allowing premature release of 11 convicts sentenced to life in the Bilkis Bano case for gangrape & murder.

The second petition was moved by TMC MP Mahua Moitra, in which notice was issued today. Her petition, filed through Advocate Shadan Farasat states that the victim has legitimate apprehensions regarding the safety of her and her family members.

"The release completely fails to bolster either social or human justice and does not constitute a valid exercise of the guided discretionary power of the State under Sections 432-435 Cr.P.C.," it states.

The PIL also mentions that the case was investigated by the CBI and thus, the Gujarat government has no power to grant remission/premature release under Section 432 CrPC without the express concurrence of the Central Government.

It adds that releasing all 11 convicts on premature release on the same day clearly indicates that the State Government has mechanically granted "wholesale" release without considering each individual case on merits.

"This vitiates the entire exercise of granting remission and is squarely in violation of this Hon'ble Court's judgments in Maru Ram v. Union of India, 1980 AIR SC 2147 and Sangeet v. State of Haryana, (2013) 2 SCC 452."

The crime took place amidst the 2002 communal riots in Gujarat. Bilkis Bano, who was around 5 months pregnant then, was gangraped, and 14 of her family members, including her three-year-old daughter, were murdered.

The investigation was handed over to the CBI as per the directions of the Supreme Court. The Supreme Court also shifted the trial to Maharashtra. In 2008, a sessions court in Mumbai passed the sentence in the case. On August 15, the 11 convicts were released from the jail pursuant to a decision taken by the Gujarat Government to grant them remission after completion of 14 years of sentence.