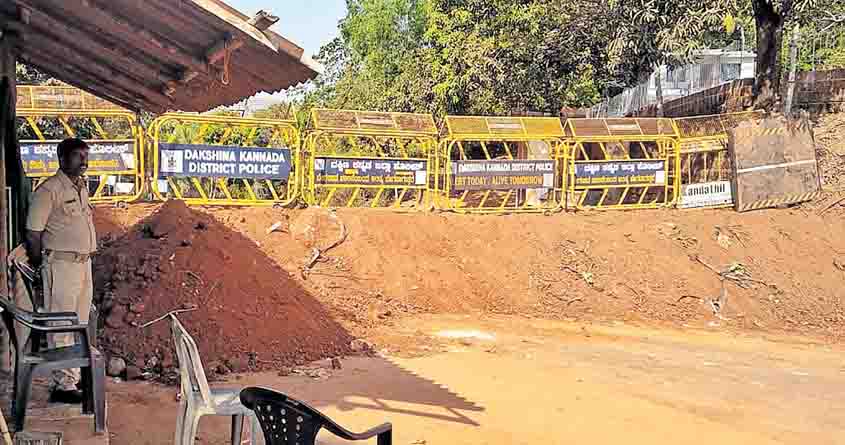 The State of Kerala has filed a Counter Affidavit in the matter wherein the State of Karnataka had moved the Supreme Court of India, challenging an order passed by the High Court of Kerala directing the Central Government to allow passage of patients for urgent medical treatment across the border between Kerala and Karnataka. The Counter Affidavit states that, apart from the...

The State of Kerala has filed a Counter Affidavit in the matter wherein the State of Karnataka had moved the Supreme Court of India, challenging an order passed by the High Court of Kerala directing the Central Government to allow passage of patients for urgent medical treatment across the border between Kerala and Karnataka.


The Counter Affidavit states that, apart from the Special Leave Petition not being maintainable, the blockade instituted by State of Karnataka is preventing the movement of not only those persons who are in dire need for medical treatment/requirements, but is also hampering the movement of essential commodities through the said roads.

"…Free flow of ambulances and vehicles carrying patients across the border is to be enforced in order to save human lives. Further, Kerala is a consumer State and depends heavily on its neighbouring States for supply of essential goods. Therefore, essential goods are also transported from Karnataka to Kerala through the roads providing access to Karnataka from the Kasaragod District".

ISSUES PERTAINING TO MOVEMENT OF PATIENTS

The Counter Affidavit stipulates the particulars of the blockades of roads, some even being blocked by dumping piles of soil and therefore, preventing vehicular entry of even ambulances plying to Mangalore for medical emergencies.

It is further stated that there are instances of road blockades by the State of Karnataka which encroach upon the geographical are of the State of Kerala as well.

The Counter Affidavit then enumerates the fact that eight lives have been lost till date on account of the blockade of Border Roads, with one person dying after the SLP was filed by the State of Karnataka.

The contentions put forward by the State of Karnataka regarding the inability of medical facilities to accommodate patients from Kasaragod in Kerala and, that local sentiments are against the removal of blockade and doing so could lead to break down of law and order have been refuted in the Counter Affidavit due to the insufficiency of cogent materials to prove the same.

The Counter Affidavit also brings up the Order dated 23.03.2020 issued by the Government of Karnataka wherein it was mandated that State Borders with neighbouring States would remain closed in view of COVID-19, except for medical emergencies. However, on 31.03.2020, an addendum was issued under the Karnataka Epidemic Act, restricting inter-state movements of even patients.

It is stated in the Counter that, apart from being unsustainable in law, the addendum is vitiated by malafides as well as it was issued after the matter was taken up for consideration by the High Court of Kerala and contentions were raised relying upon the 23rd March Order. Additionally, domicile considerations or residence could not be a criterion for providing treatment in hospitals.

Furthermore, despite the impugned Order passed by the High Court of Kerala and even after the Supreme Court was seized of the matter, directions were given to hospitals to not admit patients from Kasaragod District and the Chief Minister of Karnataka had openly declared that the blockade would not be removed.

The contention of the State of Karnataka that no essential commodities were being moved from Kodagu (Coorg) District has been denied. It is further stated that the alternate routes that have been suggested are either circuitous or create difficulties, and therefore, will result in the rise of the price of the essential commodities.

State of Kerala has also invoked the Guidelines which have been issued by the National Disaster Management Authority under Section 10(2) of the Disaster Management Act, 2005, as per which the NDMA is empowered to issue guidelines/give directions to the concerned Ministries or Departments of the Government of India, the State Governments and the State Authorities regarding measures to be taken by them in response to any threatening disaster.

The Counter also states that the actions of the State of Karnataka are arbitrary, illegal, violative of the statutory guidelines and punishable as per the provisions of the DM Act. Therefore, they are constitutionally mandated to remove the various blockages and the Union Government is mandated under the Constitution to direct the State of Karnataka to remove the same.

BLOCKADE OF NATIONAL HIGHWAY BY STATE OF KARNATAKA

The contention of the State of Karnataka that they have the authority to regulate the movement within the State's territorial limits has also been opposed as beign against the federal structure of the country and contrary to the spirit of the Indian Constitution, particularly Article 1. As the National Highway has been blocked, it is stated that it is the duty of the Central Government to issue directions to the State of Karnataka to remove such blockage to the extent it prevents transport of patients and essential goods.

It is further stated that "the act of the State of Karnataka in blocking the National Highways and other roads to Kerala, to extent of even preventing residents from getting access to medical treatment and preventing movement of essential goods, is violative of the fundamental rights guaranteed to the citizens of India residing in Kerala under Articles 19(1)(d) and 21 of the Constitution of India.

It goes on to assert that "the right of a citizen to move freely throughout the territory of India, subject to reasonable restrictions, is recognized under Article 19(1)(d) of our Constitution. The right to food and right to take recourse to proper healthcare are necessary concomitants of the fundamental right to life guaranteed under Article 21 of the Constitution and the same is infringed on account of the blockade erected by the State of Karnataka".

On 1st April, 2020, in a PIL filed by Kerala High Court Advocates Association, the Kerala High Court had directed the Union Government to remove the border blockade imposed by Karnataka to allow entry for patients from Kerala to access emergency medical care in hospitals in Karnataka as the blockade of the same amounted to violation of right to life under Article 21 of the Indian Constitution.

Impugning the order of the Kerala High Court, the State of Karnataka had moved the Supreme, asserting that the implementation of the order would lead to law and order issues as the local population was opposing the entry of people from the Kasaragod district which has a high number of COVID-19 cases.

It was averred that the Kerala High Court had overstepped its territorial jurisdiction under Article 226(2) by passing directions in a matter in which the cause of action arose completely within the State of Karnataka.
Click Here To Download Affidavit
[Read Affidavit]