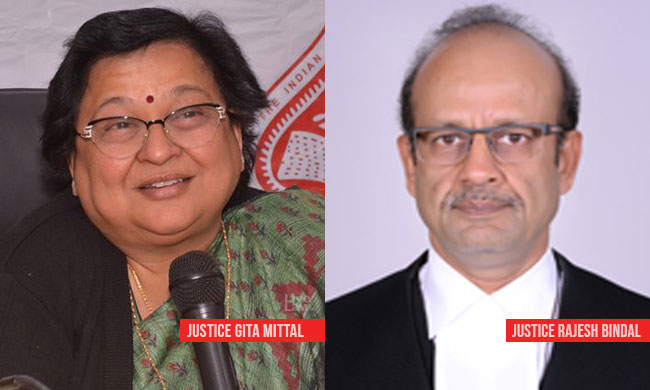 High Court of Jammu and Kashmir has issued notice to striking lawyers to show cause as to why they should not be proceeded against for criminal contempt of court.

A Division Bench of Chief Justice Gita Mittal and Justice Rajesh Bindal has taken cognisance of the Lawyers' strike in the various Courts including the High Court, District Courts, Jammu and Kashmir Special Tribunal and Revenue Courts for an indefinite period.

The lawyers went on an indefinite strike on November 1 to protest against the administration's decision to divest the courts of powers to register various documents and vest the same with the Revenue Department.

"The Principal District Judge had to personally remain present at the entry gate on 5th November, 2019 to facilitate entry into the District Courts of lawyers willing to work, appear in courts as also under trial prisoners, litigants and public. However, at 11:30 am on the same day, the main gate was again locked by the striking lawyers. Once again, the Principal District Judge had to intervene and facilitate access into the building to the litigants, staff and public".

As per the Order, on 6th November 2019, the striking lawyers allegedly started physically checking identity cards of those who wanted to enter into the Court building. Yet again few staff members, under trial prisoners and some accused were able to enter the Court. As a result of the main gate being locked, the judges, staff and those who were inside the District Courts were confined therein by these striking lawyers.

We are not setting out the impediment and the obstruction caused in the civil justice dispensation system in the District Courts, on account of their locking the main gate. However, it needs no elaboration that consequential delays would be unsurmountable and grave prejudice would have resulted to several litigants who are in dire need of immediate justice.

It is noteworthy that some of the most sensitive cases in the country are being tried in the Jammu district courts. From the designated NIA Court alone, information has been received that some extremely sensitive cases involving national security had to be adjourned on account of the aforesaid conduct by these lawyers. For the reason that complete list of cases would make this order extremely unwieldy, we are noticing hereafter some of the critical trials which could not proceed and had to be adjourned on account of contumacious and criminal conduct of the above lawyers.

The reports received from the Registrar Judicial show that an effort to similarly obstruct lawyers and litigants even in the High Court was unsuccessfully attempted by shifting sofas, which are court property, from their assigned places, to be used as barricades at access points within the court. We are informed that these sofas could not be used to completely prevent litigants. However, active measures were attempted to completely obstruct willing lawyers from appearing in the Court.

Court said, despite the mandate of the law laid down by the Supreme Court, open threats are yielded by unruly elements in the Bar that the Bar Association is a strong one and lawyers would be removed from its 9 membership if they chose to oppose the strike call or appear in courts. The entire justice dispensation system in Jammu has been held to ransom.

The Court held that the mere call for meeting, or the very decision to proceed on strike; remaining absent from court and boycott of judicial proceedings; locking the courts, preventing entry to those wanting to enter are completely illegal rendering all persons responsible for the same for appropriate action as mandated by the Supreme Court of India. This conduct tantamounts to criminal contempt of court in terms of the law laid down by the Supreme Court of India.

"This conduct also calls for action in accordance with the Jammu and Kashmir Advocates (Regulation of practice in the High Court and Subordinate Courts) Rules, 2003.

We have no manner of doubt that such conduct as is in blatant violation of the mandate of law, in the clear pronouncements of the Supreme Court of India cannot be countenanced or condoned. As observed by the Supreme Court, we would become party to such violations if we continue to ignore such actions which have been held by the Supreme Court to be clearly contumacious and falling under the serious category of criminal contempt of court, professional misconduct and even criminal offences".

The Court has issued the following Directions;

i) At the first instance issue notice to the advocates detailed in para 27 of this Order to show cause as to why they should not be proceeded against for criminal contempt of court.

ii) Notice to show cause to these advocates as to why they should not be proceeded against under rules 10, 11 of the Jammu and Kashmir Advocates (Regulation of Practice in the High Court and Subordinate Courts) Rules, 2003 as well as proceeded against for the acts which are penal under the provisions of the Indian Penal Code.

iii) The noticees as above shall file a response within two weeks of the receipt of the notices.

iv) The response shall be accompanied by a date wise list of cases wherein these lawyers were engaged by litigants between 1st November 2019 till date and the courts where these cases were listed.

v) The Registrar General shall procure from the Registrar Judicial as also from the Principal District & Sessions Judge, Jammu upto date reports regarding the position with regard to the obstructions to access to the courts as well as CCTV video coverage recorded and photographs thereof, if any, and place the same before us.

vi) The Registrar General shall circulate the judgments referred herein to all Bar Associations in the Union Territories of Jammu and Kashmir as well as the Union Territory of Ladakh and to all Principal District & Sessions Judges for circulation and compliance.

vii) The Registrar IT shall conduct an inquiry and collect all postings on the social media on Youtube or any other site, tweets, messages, interviews and speeches etc. by any counsel in violation of the judgments of the Supreme Court inciting violence/abstention from the court etc and place the same before this court