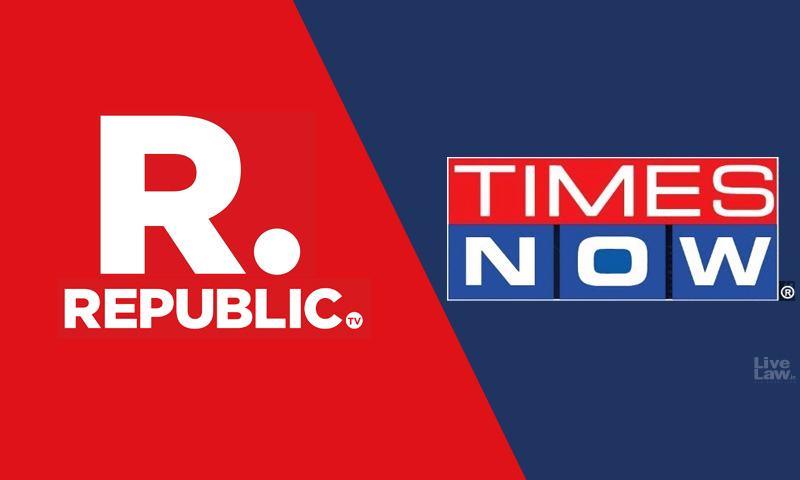 The Bombay High Court on Monday held that the media coverage done by the Republic TV and Times Now against Mumbai police in the case pertaining to death of late actor Sushant Singh Rajput is prima facie contemptuous."Criticism of city police by TV media was unfair, in view of the material placed on record. The city police was at the very basic stage of probe", the High Court said.Bombay...

The Bombay High Court on Monday held that the media coverage done by the Republic TV and Times Now against Mumbai police in the case pertaining to death of late actor Sushant Singh Rajput is prima facie contemptuous.
"Criticism of city police by TV media was unfair, in view of the material placed on record. The city police was at the very basic stage of probe", the High Court said.

Bombay High Court passes scathing observations against #RepublicTV and #TimesNow for their reportage on SSR case.
"These TV channels took upon themselves the role of investigator, the prosecutor as well as judge & delivered the verdict"@TimesNow https://t.co/7v3Sfvb89X pic.twitter.com/Fblk34sWqj

A Division Bench comprising  Chief Justice Dipankar Dutta and Justice GS Kulkarni observed that the media ought to avoid discussions, debates relating to criminal investigation and should confine only to informative reports in such matters in public interest.

The Bench however refrained from taking any action against the channels and proceeded to issue guidelines for reporting of ongoing investigations in the future.

Disposing of a batch of PILs seeking regulation of media trial, the bench laid down several guidelines on reporting on crime.

Some of the key observations are :

During the hearing of the matter over last six months, the High Court had expressed concerns over the practice of "media trial".

It asked the media not to cross boundaries, and indicated that it will lay down guidelines.

"If you become the investigator, prosecutor and the judge, what is the use of us? Why are we here", the bench had asked the Advocates representing Republic TV.

"Is this part of investigative journalism? Asking public about their opinion on who should be arrested?

When a case is under investigation and the issue is whether it's a homicide or a suicide and a channel is saying it is murder, is that investigative journalism?", the bench had asked Advocate Malvika Trivedi, Republic TV's lawyer.

The bench told the channel's lawyer "investigative powers are given to the police under the CrPC".

The Bombay High Court was pronouncing its verdict on a clutch of PILs seeking guidelines for "ethical reporting and responsible journalism," by all form of media, especially at the investigation stage.

The first PIL was filed by eight retired IPS officers, in September, last year. They were irked by the manner in which the Mumbai Police force's reputation was being tarnished in a highly politicised investigation and a 'trial by media' into film star Sushant Singh Rajput's death by suicide.

The other PILs are filed by filmmaker Nilesh Navalkha and others, Advocate Asim Suhas Sarode (party-in-person), an NGO named 'In Pursuit of Justice' and beleaguered film producer Prerna Arora.

During the hearings, the bench of Chief Justice Dipankar Dutta and Justice GS Kulkarni had made strong oral remarks criticizing the pattern of reporting a few media houses followed in the Sushant Singh Rajput case. "We would like [the] media not to cross boundaries," the bench had observed.

If you become the investigator, prosecutor and the judge, what is the use of us? Why are we here"

"If you are so interested in unearthing the truth, you should have looked at the CrPC! Ignorance of law is no excuse"

The bench also asked the lawyer of Republic TV if asking the public who should be arrested in a case is part of investigative journalism. This was in reference to the hashtag campaign '#ArrestRhea' run by the channel in Twitter following the death of Sushant Singh Rajput.

"Is this part of investigative journalism? Asking public about their opinion on who should be arrested?", the bench asked.

"Journalists were responsible back then & neutral, now media is highly polarised(sic)", the Court remarked. The Court also said that the concept of self-regulation of media has failed.

Chinoy had relied on the Delhi High Court judgment in 'Naveen Jindal v Zee Media's' case, where the channel was restrained from publishing certain allegations pending investigation. He argued that courts have the inherent power to restrain publications which affects the right to fair trial of the accused.

ASG Anil Singh argued if media reporting at the stage of investigation can amount to contempt of court, as an interference with the administration of justice. He as well as Senior Advocate Arvind Datar relied on the Supreme Court judgment of AK Gopalan vs Noordeen (1969), stating that it was relied upon by the SC in the Sahara India Real Estate Corp. Ltd. & Ors. Vs SEBI... judgement. Here a constitutional bench of the SC had refused to frame guidelines for media reportage.

Senior Advocate Datar argued that AK Gopalan's case was relevant even after the Contempt of Courts Act 1971 as it dealt with the inherent powers of contempt of courts under Articles 129/215 of the Constitution.

The division bench had then reserved its judgement in the case on November 6, 2020.