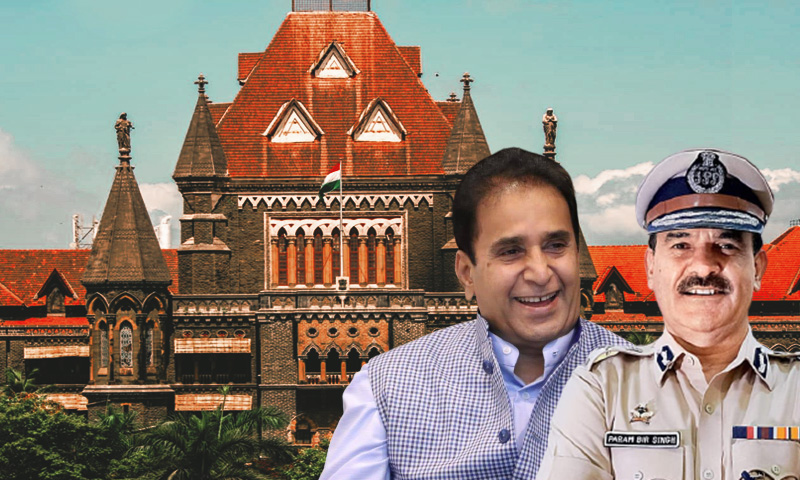 The Bombay High Court on Monday directed CBI to conduct preliminary inquiry in to corruption allegations against Maharashtra Home Minister Anil Deshmukh. A division bench of Chief Justice Dipankar Datta and Justice GS Kulkarni has ordered the CBI director to conclude the inquiry within 15 days and take further action in accordance with law."Interest of justice will be done if the...

A division bench of Chief Justice Dipankar Datta and Justice GS Kulkarni has ordered the CBI director to conclude the inquiry within 15 days and take further action in accordance with law.

The bench held that an un-biased probe is required to "unearth the truth."

With the above observations the bench disposed of a clutch of petitions seeking investigation into the matter. The order of CBI inquiry was specifically passed on the writ petition of Advocate Jaishri Patil.

"We also agree with Dr. Patil, directions required to order unbiased probe to unearth truth. There can be no independent probe if it is given to Police where Deshmukh is the Home Minister", the bench said.

Regarding the criminal PIL filed by ex-Mumbai CP Param Bir Singh, the bench said that would be at liberty to make a grievance regarding his transfer and posting before any appropriate forum.

"In view of the order now we have passed, no concern survives. Petitions disposed of," the bench held.

Observations by the bench

Some of the crucial observations made by the Court in the judgment are as follows :

"Prima facie, the issues are such that the very faith of citizens in the functioning of the police department is at stake"'

"If there is any amount of truth in such allegations, certainly it has a direct effect on the citizens' confidence in the police machinery in the State. Such allegations, therefore, cannot remain unattended and are required to be looked into in the manner known to law when, prima facie, they indicate commission of a cognizable offence".

"It is, hence, certainly an issue of credibility of the State machinery, which would stare at the face when confronted with the expectations of the law and when such complaints are received against high ranking public officials. This Court cannot be a mere spectator in these circumstances"

"Thus, when high officials are likely to be involved and a question of public confidence in the impartial working of the State agencies arises, the writ court in exercise of its jurisdiction under Article 226 of the Constitution is certainly not powerless to order such inquiry and investigation by the CBI"

"To instill public confidence and safeguard the Fundamental Rights of the citizens, it is necessary that an inquiry and investigation is conducted by an independent agency and for such reasons, we consider it to be in the paramount public interest that an independent probe in the present circumstances would meet the ends of justice".

On Wednesday, a division bench of Chief Justice Dipankar Datta and Justice GS Kulkarni reserved its order on the petitions, following marathon arguments on admission, interim reliefs and the State's objection to the petition's maintainability.

Ex- Mumbai Police Chief Param Bir Singh had sought an "immediate and fair investigation" on the various "corrupt malpractices" of Maharashtra's Home Minister Anil Deshmukh before "evidences are destroyed." He further sought a direction to the state government against police transfers for any pecuniary benefits to any politicians or in contravention of the guidelines issued in Prakash Singh & others vs Union of India.

The bench expressed its dilemma over passing an order for an investigation in the absence of an FIR. "An FIR is the first step into setting the criminal law in motion," CJ Datta observed.

Justice Datta frowned at the practice of approaching the Courts seeking directions for an independent probe, without even approaching the police to register an FIR. The bench observed that just writing letters to the CM (as Param Bir had done), wasn't enough.

In an eight-page letter to CM Uddhav Thackeray on March 20, Singh accused Deshmukh of holding meetings with subordinate police officers, including suspended API Sachin Waze, and seeking a collection of Rs 100 crore from the 1750 bars and restaurants, in Mumbai. Deshmukh has denied the allegations.

During the hearing, Advocate General Ashutosh Kumbhakoni raised a preliminary objection of maintainability against Singh's PIL, stating that the latter is "vitally interested" in both the prayers in the PIL.

Singh had written the letter three days after he was shunted out of the Mumbai Police Commissionerate and took charge as the Commandant General Home Guards.

Senior Advocate Vikram Nankani, appearing for Singh submitted that the allegations have been levelled by a person who occupied the "highest police post" and it is something that needs to be looked into by an independent investigating agency.

He read out Singh's letter and also referred to a report by former Commissioner (intelligence) to the Director-General of Police, Rashmi Shukla's report regarding pecuniary benefits from police transfers, to submit that the issue is "related to interference by political masters." Nankani said Singh was not challenging his transfer.

Towards the end of the hearing, Nankani submitted he was only seeking an independent inquiry by the CBI if an investigation was not possible.

When Nankani argued that the court's powers are wide, the bench said that it was only in very rare cases that it can order an FIR. Moreover, the correct course of action would be to approach the Magistrate Court under section 156(3) of the CrPC.

The bench asked Singh if he had annexed affidavits from the concerned officers who were asked to make the collection to which he replied in the negative.

"Is there any first-hand information that the Home Minister said something in your presence? Is there an affidavit annexed of any of the officers that this was said to them or in their presence," asked the CJ.

The court heard Additional Solicitor General Anil Singh for the CBI, who said the agency was willing to take over the probe.