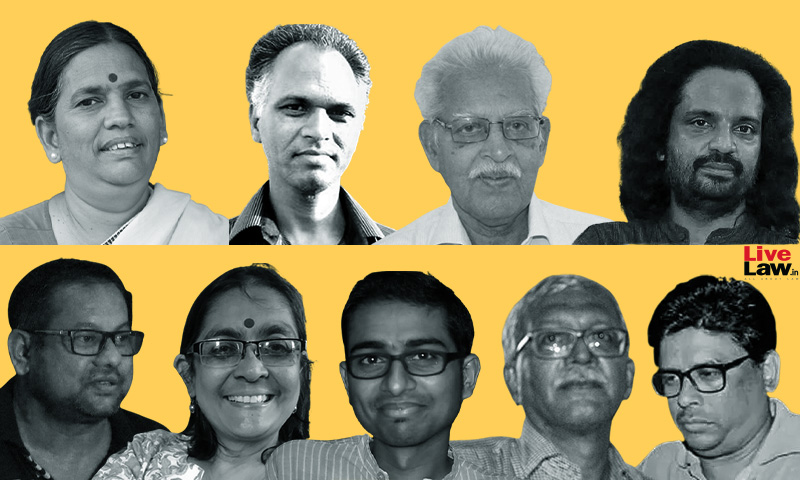 Eight accused in the Bhima Koregaon-Elgar Parishad case denied default bail have re-approached the Bombay High Court claiming to have exercised their right to default bail well within the stipulated period.

It may be recalled that the High Court had granted default bail to lawyer-activist Sudha Bharadwaj, an accused in the case, on the ground that the Pune Sessions Court was not competent to extend the time for probe as it was not notified as a Special Court under the NIA Act. However, the Court denied the same benefit to other accused by saying that they had not filed applications for default bail when that right accrued to them.

Dhawale, Wilson, Gadling, Sen and Raut said that they filed default bail pleas on September 26, 2018, ie. 90 days after their arrest on July 6 and before the first charge sheet against them was submitted on November 15, 2018. These applications haven't been decided till date, they claim.

It may be noted that the applications were not before the Bombay HC when it rejected their default bail pleas.

They pointed out that the November 6, 2019 order was set aside by the HC while granting bail to Bharadwaj.

"The date of arrest of the accused 6—9(Gonsalves, Rao, Ferriera and Bharadwaj) being the same and all the accused had preferred application for default and hence are at par. The Accused No. 6-8(Gonsalves, Rao and Ferriera) have been denied same relief accorded to Sudha Bharadwaj on account of a factual error," the plea said.

The accused have said their default bail pleas filed in the Pune Sessions Court are either pending adjudication or rejected along with lawyer-activist Sudha Bharadwaj's plea in 2019.

With these arguments, the 8 accused moved a precipice to place the case for "speaking-to-minutes" hearing.

Today, the division bench of Justices SS Shinde and NJ Jamadar wondered if such reliefs could be granted by "speaking to minutes" process, which is meant for correcting minor factual corrections. The court, however, agreed to hear the matter on December 23.

According to the HC's 120-page judgement, the main differentiator between the Bharadwaj and the other accused was seeking bail under section 167(2) of the CrPC, in time. ie. after completion of 90 days of custody but before the charge sheet is filed.

The court said while Bharadwaj had satisfied the twin conditions by approaching the court after the mandatory period of detention (90 days) and before the filing of the charge sheet on February 21, 2019, the remaining accused sought default bail-in on June 21, 2019, several months after the charge sheet was filed.

In its detailed order granting default bail to Bharadwaj, the HC Court said that Additional Sessions Judge of Pune KD Vadane was not authorized to extend the time for Pune Police to file the charge sheet or extend her further detention under the provisions of the UAPA Act on November 26, 2018.

The HC had however refused to accept the argument put forth by all the accused that because the Pune sessions court was not empowered to take cognizance of the charge sheet for scheduled offences (UAPA), its consequence would entail no charge-sheet having been filed by the investigating agency on the given dates – November 15 and February 21 and therefore the accused are entitled to default bail.

"Consistent with the enunciation in the case of Bikramjit Singh (Supra) and in the face of undisputed position of existence of Special Court at Pune, the charge-sheet ought to have been lodged before the Special Court. However, the act of taking of cognizance, by the learned Additional Sessions Judge (Shri K.D.Vadane), does not entail the consequence of the vitiation of the entire proceedings," the court ruled.

The court relied on section 460(e) of the CrPC under which a magistrate taking cognisance of proceedings in good faith cannot be vitiated merely on the ground that the court was not empowered.

Thus the HC ruled that failure to take cognizance or defect in jurisdiction in taking cognizance, once the charge-sheet was laid, does not entail the consequence of default bail.

Once the court held that the proceedings or the charge sheet was not vitiated, it was imperative for the accused to have filed their default bail pleas before filing the charge sheet. ie. before November 15 and February 21.

The Supreme Court recently dismissed the petition filed by the NIA challenging the High Court order granting relief to Bharadwaj.

Apart from Bharadwaj and Rao(granted bail on medical grounds), all the accused are still in prison.