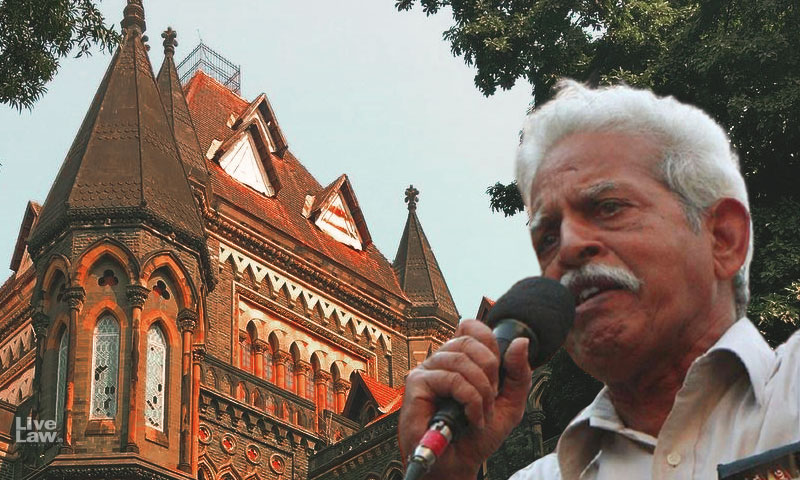 The Bombay High Court on Monday granted bail on medical grounds to 81-year-old Varavara Rao, an accused in the Elgar Parishad-Bhima Koregaon case, who has been under custody awaiting trial since August 28, 2018.The High Court observed that it was a "genuine and fit" case for granting relief in view of the advanced age of the petitioner and inadequate facilities at Taloja jail hospital....

The Bombay High Court on Monday granted bail on medical grounds to 81-year-old Varavara Rao, an accused in the Elgar Parishad-Bhima Koregaon case, who has been under custody awaiting trial since August 28, 2018.

The High Court observed that it was a "genuine and fit" case for granting relief in view of the advanced age of the petitioner and inadequate facilities at Taloja jail hospital. The bench added that if it denies relief to Rao, it will be abdicating its constitutional duties as a protector of human rights and right to health covered under Article 21 of the Constitution.

A division bench of Justices SS Shinde and Manish Pitale said that after 6 months he should either surrender or apply for extension. The bench imposed a condition that octogenarian Rao should not make any public statements related to the proceeding and should not establish connection with co-accused. Also, Rao has to remain within the jurisdiction of Special NIA Court, Mumbai. The bench observed that allowing Rao to go back to where he belongs(Hyderabad) is "fraught with risk".

The other conditions are :

After the order was pronounced, the counsel for the National Investigation Agency made a request for staying the release of Rao for three weeks.

However, the bench refused to stay.

"We cannot stay his release, we will record your submission", the bench told the NIA's counsel.

The relevant observations from the order are as follows :

"With all humility at our command, keeping in view of the human condition, in view of advanced age and inadequate facilities at Taloja jail hospital, we are of the opinion this is a genuine and fit case to grant relief or else we will be abdicating our constitutional duties as a protector of human rights and right to health covered under Article 21.

We feel that although material on record shows that the health condition of undertrial is precarious we feel that sending him back to where he belongs is fraught with the risk of his presence being used by those allegedly associated with him. The court cannot rule out such contingency and therefore we feel appropriate to impose conditions as necessary so that the undertrial or those associated with him do not take undue advantage".

The Court also observed that the release of Rao cannot be unconditional as he stands accused of serious offences under UAPA and IPC.

"It is an admitted position that as per the accusations levelled against the undertrial and the material placed along with the charge-sheet, the undertrial is accused of being a senior member of the banned organization Communist Party of India (Maoist).It is an organization which believes in violence and overthrow of the Constitutionally and legally established Government. The material on record, including letters and communications exchanged between the co-accused prima facie show that there is reference to the undertrial, indicating that he had facilitated financing of such violent activities. The said material, subject to proof and proceedings before the trial court, indicates that the undertrial was also involved in providing arms and ammunition for illegal and nefarious activities", the bench observed.

It was on February 2 that the division bench reserved judgment in the case.

Rao's wife, Pendyala Hemalatha had also petitioned the court for a declaration that her husband's fundamental rights to health, dignity and life, and thereby his rights, under Article 21 of the Constitution of India have been violated by Taloja prison officials, as they neglected to give him the timely treatment required.

Rao was arrested on August 28, 2018 and subsequently charged under the stringent Unlawful Activities Prevention Act (UAPA) along with 16 other academics and activists. He is currently recuperating in Nanavati hospital following the High Court's intervention, in November 2020. Last month, Nanavati said Rao is hemodynamically stable and fit to be discharged.

Rao and his wife, represented by Senior Advocates Indira Jaising and Anand Grover, have sought for the octogenarian to be granted bail and sent back to his home, in Hyderabad, for at least three months, owing to his advanced age and neurological condition. The National Investigating agency and the State have vehemently argued against setting him at liberty due to the serious allegations against him. They have, however, shown their willingness for him to be shifted to the prison ward of Sir JJ Hospital, where his condition could be monitored.

Senior Advocate Indira Jaising, appearing on behalf of Hemlatha, had submitted that Rao has spent 149 days of the 365 days in a year, in a hospital ward.

"His crime is in his mind, it's a crime of conscience. If he disagrees with the policies of the government... he does. If for that he is prosecuted, it will be prosecution for ideas," she had argued.

Jaising pointed out that neither the State nor the NIA has denied that there are merely three Ayurveds in the prison jail hospital, not a single allopathic doctor, leave alone a specialist. "His continued incarceration is incompatible with his health." She repeated.

Rao was admitted to JJ Hospital, last year. However, after he tested positive for the coronavirus, he was shifted to St. George Hospital and subsequently to Nanavati Hospital, after the Human Rights Commissions intervention. He was finally discharged from the hospital in July, 2020.

The octogenarian's bail application was rejected twice by the special NIA court, last year, following which an appeal was filed in HC, in July 2020. His lawyers approached the HC again in November, after it was found that Rao was suffering from Urinary Tract Infection, accompanied with a kidney disorder. His discharge summary from St George Hospital had also mentioned dementia.

Rao was admitted to Nanavati hospital from Taloja Prison on November 18, 2020, with the state agreeing to bear his expenses there.

During previous hearings, the court observed that Rao's catheter remained unchanged for three months in the hospital ward of Taloja prison.

Researcher Rona Wilson, Rao's co-accused in the Elgaar Parishad-Bhima Koragaon case recently approached the Bombay High Court seeking the formation of a Special Investigation Team to inquire into the planting of fabricated documents in his computer over a course of around 22 months.