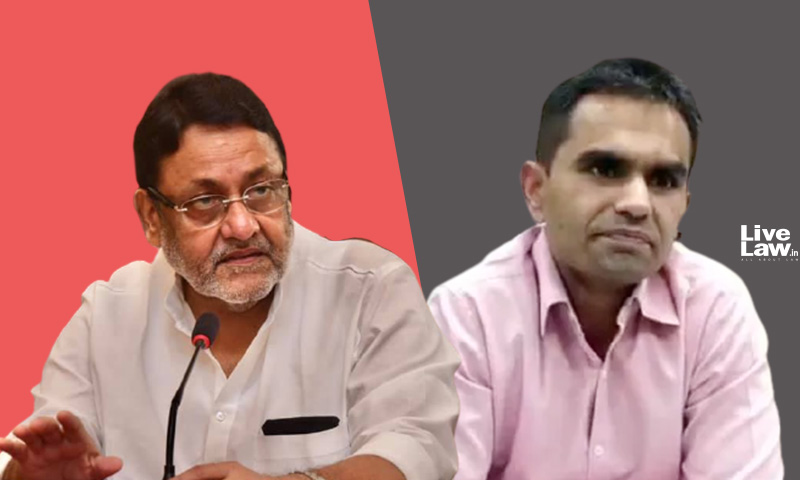 Maharashtra Cabinet Minister Nawab Malik has accused NCB Zonal Director - Sameer Wankhede's father of attempting to cover-up his son's illegalities by filing a defamation suit against him. Opposing the plea for ad-interim reliefs before the Bombay High Court, Malik cited the government's action of initiating a vigilance enquiry against Sameer Wankhede based on the evidence...

Opposing the plea for ad-interim reliefs before the Bombay High Court, Malik cited the government's action of initiating a vigilance enquiry against Sameer Wankhede based on the evidence he provided.

The reply further points out how the cruise ship drug case, in which Aryan Khan is an accused, and other cases have been transferred to an SIT in Delhi after extortion allegations surfaced.

Dhyandev Wankhede approached the Bombay High Court to permanently restrain Malik from publishing anything defamatory against him and his family after the latter published Sameer Wankhede's birth certificate and alleged that Sameer was born a Muslim but secured a Government job by falsely claiming to be from Scheduled Caste.

In the said certificate, Dhyandev's name is mentioned as 'Dawood'.

On Monday the Bombay High Court briefly heard Wankhede and Malik's counsels, directed Malik to file a reply to the plea by today and adjourned the case for hearing tomorrow.

Malik, in his reply, states that the case clearly falls under one of the exceptions of defamation under section 499 of the IPC. Moreover, apart from "bald bare averments," Wankhede was unable to produce a single document to contradict the birth certificate.

The minister claimed that the suit deserves to be dismissed as Wankhede distorted facts and concocted stories and made another feeble attempt to obtain orders against him.

Malik claims that the father has filed the suit in a representative capacity seeking reliefs on behalf of his adult children for which he has failed to obtain prior permission of the court under Provisions of Order 1 Rule 8 of the Civil Procedure Code, 1908.

These provisions are mandatory in nature.

"There are four essential conditions for a party to institute a representative suit, which are, Parties should be numerous, Having same interest, Necessary permission of the Court has been obtained and Notice is issued to all persons interested in the suit," he said.

Family Members Have not Initiated Any Proceedings

The Minister has said that Sameer Wankhede being an officer, his wife Kranti Redkar, an actor, and Dhyandev's daughter Yasmin, a criminal lawyer, should have all initiated independent proceedings if they were defamed.

Malik also says that he had produced several documentary evidence in support of his claims which would have to be tested at the time of trial.

Moreover, they have failed to show as to how the statements and remarks made by Malik are derogatory or defamatory of Dhyandev nor has he made any specific denial of the truthfulness of the statements, the reply said.

Malik says that in the capacity of NCP spokesperson he has tried to expose the illegalities committed by Sameer Wankhede, who is also a public servant.

"I say that now different investigating agencies are investigating into the illegalities committed by the son of the Plaintiff, as they have found prima facie material for investigation. I say that the Plaintiff by filing the present suit is trying to curtail the freedom of expression granted to him under Article 19 of the Constitution of India, which Defendant uses for public good. The present suit is nothing but an attempt to cover up the illegalities committed by the Plaintiff's son."