'We Would Cease To Be Vacation Judges At The Stroke Of Midnight' : Bombay High Court Adjourns Param Bir Singh's Plea, Grants Protection 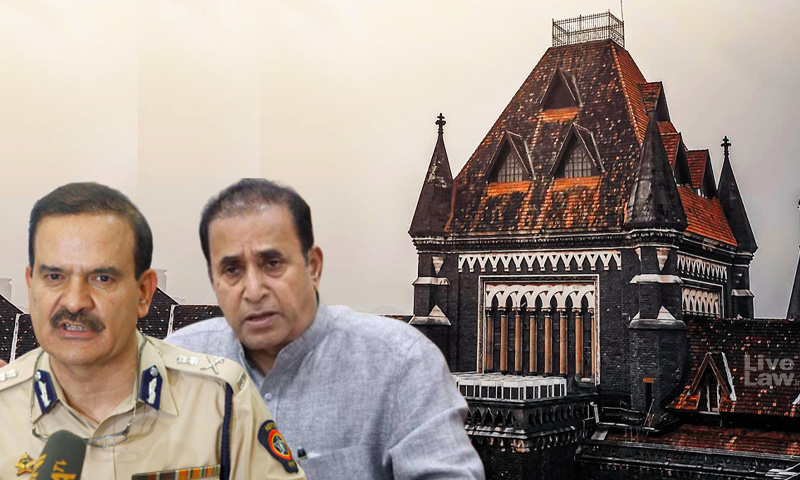 After hearing cases late into night, a vacation bench of the Bombay High Court adjourned to Monday the plea filed by Ex- Mumbai Police Commissioner Param Bir Singh, when the clock struck 12 midnight. Param Bir Singh has filed the case for quashing of an FIR under investigation by the Thane Police, against him and 32 others, for offences under SC/ST Act, Civil Rights Protection...

After hearing cases late into night, a vacation bench of the Bombay High Court adjourned to Monday the plea filed by Ex- Mumbai Police Commissioner Param Bir Singh, when the clock struck 12 midnight.

Param Bir Singh has filed the case for quashing of an FIR under investigation by the Thane Police, against him and 32 others, for offences under SC/ST Act, Civil Rights Protection Act, Maharashtra Police Act and IPC.

While noting that they would "cease to be vacation Judges at the stroke of midnight", a division bench comprising Justices SJ Kathawalla and SP Tavade adjourned the case to Monday while asking the State of Maharashtra not to arrest Param Bir Singh till then.

"We had 60 matters on board today, including the petition filed by the State of Maharashtra against the CBI, which was part-heard… We have heard Mr Jethmalani and Mr Khambata and since we would cease to be vacation judges at the stroke of 12 (midnight). We adjourn the hearing of the matter for Monday. However, it is subject to the Registry taking permission from the Hon'ble Chief Justice. In the meantime the State if Maharashtra may not arrest Mr Param Bir Singh", the bench noted in the order.

It is the second instance in the week where this bench held sitting for over 12 hours from morning 10.30 AM till late into night.

Earlier in the day, the Bench asked Senior Advocate Darius Khambata, appearing for the State, if they wished to arrest Singh.

Khambata stated that the present matter is a very serious one under the SC/ST Act, and while he is not saying they will arrest him overnight, he also doesn't want any fetters on the investigation.

The bench took up the matter at the bottom of the board at 10.17 pm after Khambata refused to continue his last week's statement.

Khambata argued that on 13th of May when the matter had come up before the previous bench led by Justice SS Shinde, he had made a statement they will not arrest him, but the same has been misused by the petitioner to approach the Supreme Court to challenge everything in a sweep including what is challenged in the present petition.

Khambata alleged that the petition didn't even inform the High Court of all this when the matter came up in the afternoon.

"It's the same matter where Justice Gavai (BR Gavai of the Supreme Court) has recused himself." the Bench noted.

Senior Counsel Mahesh Jethmalani appearing for Param Bir Singh argued that the FIR is wholly misconceived, and therefore their plea is for quashing of the FIR.

Jethmalani argued that ludicrous cases are being filed against Param Bir for his letter against Deshmukh. He added that the FIR states that arrest Param Bir Singh and others for filing false cases against the complainant. One of those cases has been completed and the appeal is pending, and Charge sheet has been filed in other cases as well.

Jethmalani argued that since the complainant has attached the old FIR's against him to the current FIR against Param Bir, those cases cannot be investigated now.

Jethmalani further argued that this is the case of fresh or denovo investigation, and what the state has indulged in is manifestly illegal. In case of a fresh investigation or de-novo investigation, there has to an express order from the court. There is a delay in of 5 years in filing the FIR, and it has come only after Param Bir's letter.

Jethmalani claimed that this is nothing but an exercise of vendetta. He stated that Ghadge went and lodged the FIR on April 28, 2021. The reaction of the state is so telling that they won't have an answer to it.

"Ghadge has filed a 500 page affidavit and served on me yesterday which has his defence.But for the state to interfere when the matters is pending before the judiciary is the grossest form of contempt." Jethamalani said.

"Anil Deshmukh's son is one of the people brokering in the police force. It has come to this level in the State of Maharashtra" Jethamalani remarked.

Referring to CBI's FIR against Anil Deshmukh, Jethmalani stated that Param Bir's statement has been recorded and is also a witness in that case.

"Who is honest and dishonest in this? A government that suppresses crimes?" Jethmalani remarked.

Referring to the conversations with DGP Sanjay Pandey, who was entrusted with the State-driven inquiry against Param Bir, Jethmalani noted that Pandey has now recused from the inquiry.

Jethmalani further claimed that the entire exercise of the FIR against Param Bir Singh is filled with malafides.

Jethmanali says that nowhere has Ghadge alleged that the FIR's against him were because he belonged to the SC/ST, yet the state has said that since he is from that community, Param Bir should be booked.

"A prima facie case is made out for stay." Jethmalani said

Counsel Talekar appearing for the complainant clarified that there has been distortion of facts. The complainant had approached the authorities for an FIR way back in 2016 and has written more than 110 letters.

Senior Advocate Khambata submitted that a court is not supposed to interfere in an ongoing investigation and the FIR discloses cognisable offence. He added that in Bhajanlal's case the Supreme Court had said that if cognisable offence is disclosed, it cannot be quashed because there is malafide

Khambata also clarified that it is a completely incorrect statement that the complainant has not even mentioned his caste in the FIR, as Ghadge had mentioned that he belonged to the Mahar community.

Khambata contended that the accused in the case where the complainant was directed to remove names by Param Bir, pertained to irregularities by high rung officers of the Kalyan Dombivli Municipal Corporation

"Since he (Param Bir) couldn't get his dirty work done by this officer, he suspended him, appointed another officer and got the names of the accused dropped from that charge sheet" Khambata said.

"Why all this after Param Bir had a fallout with the government? We are on malafides" Bench said.

Khambata argued that if this investigation makes out a cognisable offence, it must be allowed to proceed.

While referring to the contents of the FIR to demonstrate the extent to which Ghadge was harassed, Khambatta remarked "If this is not a cognisable offence what is? "

Khambata pointed out how Ghadge spent 14 months in prison in a case he was acquitted in eventually. And how Ghadge wrote to all the authorities asking them to take cognisance of the atrocities against him.