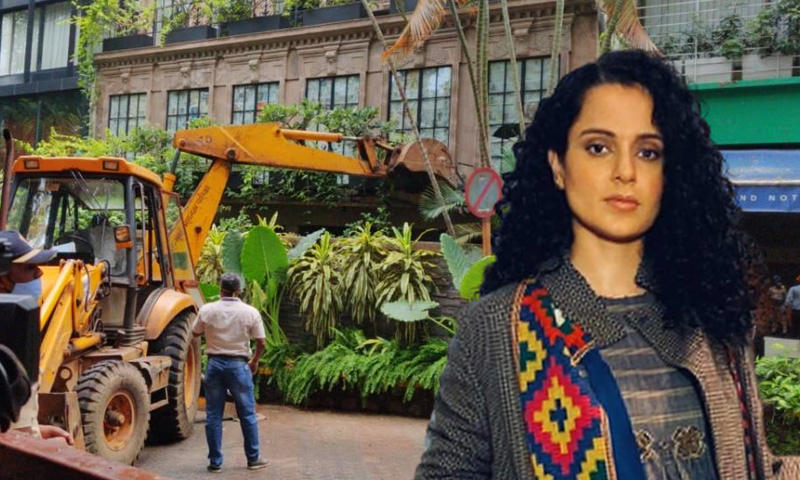 In a huge relief to Hindi film actor Kangana Ranaut, the Bombay High Court on Friday quashed the notice and order issued by the Brihanmumbai Municipal Corporation(BMC) to demolish her bungalow.The High Court came to the conclusion that the order was "actuated by legal malice"."We have come to a clear conclusion that the impugned noticeunder iection 354A of the Act and the action ...

In a huge relief to Hindi film actor Kangana Ranaut, the Bombay High Court on Friday quashed the notice and order issued by the Brihanmumbai Municipal Corporation(BMC) to demolish her bungalow.

The High Court came to the conclusion that the order was "actuated by legal malice".

"We have come to a clear conclusion that the impugned noticeunder iection 354A of the Act and the action of demolition following it, areactuated by malavdes, in any event, involve a clear malice in law, causing a substantial injury to the Petitioner", the High Court observed in its 166-page judgment.

"Illegal and colourable actions on part of the State or its agencies vis-a-vis a citizen, is far too serious and damaging to the society to be overlooked. Whatever be the folly of an individual, whether in the manner of unautohrized construction or irresponsible statements hurting the sentiments of individuals or public in general, no action against such individual by anyone, much less by the state, can lie except within the four coroners of the law".

The Court has appointed a surveyor/valuer to assess the damages caused to the building and to submit a report before it in March 2021 for determining the compensation payable to Kangana.

In the judgment, the Court said that it disapproved Kangana's public statements and cautioned her to exercise restraint in public platforms. But the Court added that the State cannot take mala fide action against a citizen for irresponsible comments which are best ignored.

"We do not accept as true any of the statements/allegations made by the Petitioner through her tweets with regard to the alleged prevailing atmosphere in the State or the State Police or against the film industry. If anything, we are of the view that the petitioner should be better advised to exercise restraint when "as a public spirited citizen", she "airs her views regarding the issues of public importance on social media platforms"", the HC said in the order.

Notable observations from the order

The background of the case lends credence to the petitioner's(Kangana) case that the demolition action was malafide and premeditated to target her for her tweets and statements.

There are materials to indicate that the action of demolition smacks of malafides.

There is a case of legal malice for this court to issue a writ.

The manner in which demolition was carried out was unauthorized and sinister to prevent the petitioner from taking course to legal remedies.

There was an attempt to present the petitioner with a case of 'fait accompli'.

The action of BMC can only be regarded as an action in deliberate disregard of the rights of a citizen.

The impugned notice and the action of demolition are actuated by malice.

The building of Kangana Ranaut was an existing construction.

The petitioner (Kangana Ranaut) should exercise restraint while airing views on public platforms.

However, irresponsible comments made by a citizen are best ignored by a State. No action by state for such follies of a citizen can lie except within the four coroners of law.

By no means, colourable exercise of power or resort to such person or to his/her property, can be permitted in any civil society. Such actions are the very antithesis of law.

The Court has allowed Kangana Ranaut to take such steps as required to make the building habitable. If reconstruction is required, she needs to take requisite permission.

A bench comprising Justices S J Kathawalla and Riyaz I Chagla had reserved judgment on October 5 after hearing elaborate oral arguments in the high profile matter spread over several days.

It was on September 9 that the BMC started the demolition of the actor's luxurious bungalow situated at Pali Hills, Bandra citing the reason that structural alterations were done without prior approval from the civic body as per the municipal building laws.

On that day itself, acting on an urgent plea moved by the actor's lawyer Advocate Rizwan Siddiquee, the High Court stayed the demolition, as it was progressing.

The bench had then expressed its dismay at the action of the BMC, and termed that it prima facie "smacks of mala fides".

"From the works set out in the Notice, it is clear beyond any doubt that the works which are 'unauthorised' have not come up overnight. However, all of a sudden, the Corporation appears to have overnight woken up from its slumber, issued Notice to the Petitioner, that too when she is out of the State, directing her to respond within 24 hours, and not granting her any further time, despite written request, and proceeding to demolish the said Premises upon completion of 24 hours. Though the manner in which the MCGM has proceeded to commence demolition work of the said Premises, prima facie does not appear to be bonafide and smacks of malafide, we are giving an opportunity to the MCGM to explain its stand / conduct on Affidavit by 3.00 p.m. tomorrow.", the HC had observed in its order passed on September 9.

In the following days, the Court started to hear oral arguments of the parties.

Kangana's lawyer, Dr. Saraf, submitted that the BMC's action was a vindictive response to the various critical remarks made by her against the Maharashtra government. He claimed that the alterations were done with all necessary approvals. The senior lawyer further argued that the BMC officials flouted procedural laws while carrying out the demolition without preparing the necessary sketch report, panchnama, and affixing photographs.

Saraf submitted that in any case, the BMC ought to have afforded her sufficient opportunity to explain her stance. There was even an option of seeking regularization, if at all there was any unauthorized construction. So, the hasty demolition, without affording such opportunities to the actor, was vitiated by "malice in law" and "malice in fact", submitted Saraf.

She claimed a compensation of Rs 2 crores from the Mumbai civic body.

In response, BMC's lawyer, Senor Advocate Aspi Chinoy, submitted that the building had substantive structural alterations which were carried out unauthorizedly. In response to the notice sent by the BMC, the actor did not offer any explanation other than making a bland denial that no work was going, when there was clear evidence of unauthorized works progressing, with the presence of workers and work materials. In view of such a bland denial without any further explanation, Section 354A of the BMC Act was attracted, which empowers the officials to act within a period of 24 hours of the notice. Chinoy also questioned the maintainability of the writ petition as there were complex questions of facts involved and urged the bench to ask the actor to approach a civil court for remedy.

Kangana had also added Shiv Sena leader Sanjay Raut as a party in the case, alleging personal mala-fides against him. She stated in her petition that the demolition followed after Raut said that Ranaut needed to be "taught a lesson".

During the hearing, the bench elaborately quizzed the BMC as to the reasons for not acting with similar alacrity against other cases of unauthorized constructions.

Justice Kathawalla, the presiding judge, grilled the officials of the BMC, who appeared via video conferencing, regarding the reasons for the exceptional action taken against Ranaut, while condoning other cases of unauthorized constructions.

For other official respondents :