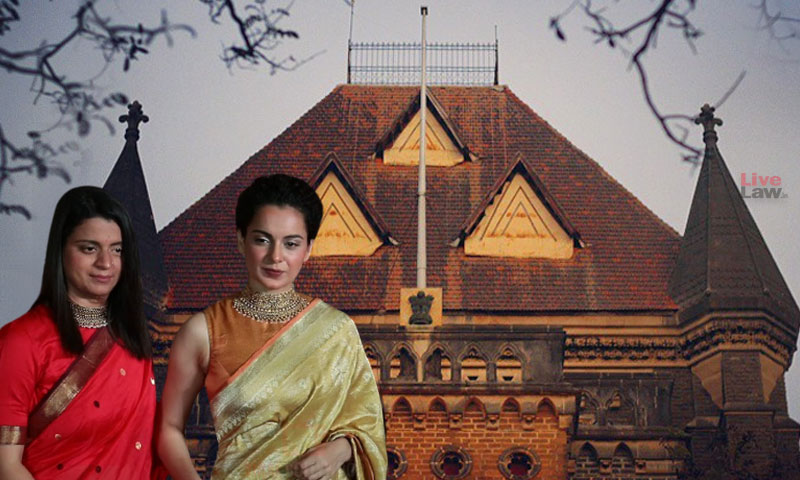 The Bombay High Court on Tuesday granted interim protection from arrest to actor Kangana Ranaut and her sister Rangoli Chandel in the FIR registered by Mumbai police over alleged communal tweets.A division bench of Justices SS Shinde and MS Karnik granted the interim protection subject to the condition that Kangana and Rangoli should appear before the investigating officer at Bandra Police...

The Bombay High Court on Tuesday granted interim protection from arrest to actor Kangana Ranaut and her sister Rangoli Chandel in the FIR registered by Mumbai police over alleged communal tweets.

A division bench of Justices SS Shinde and MS Karnik granted the interim protection subject to the condition that Kangana and Rangoli should appear before the investigating officer at Bandra Police on January 8 between 12 PM to 2 PM for recording the statement in the case.

The bench also recorded the submission on Advocate Rizwan Siddiquee on behalf of Kangana and Rangoli that they would refrain from making public comments or social media posts on the subject FIR during the pendency of the matter.

During the hearing, the bench expressed surprise at the fact that the offence of sedition under Section 124A of the Indian Penal Code has been added in the FIR.

"We understand other sections. But Section 124A? Are you treating citizens of country like this?", Justice Shinde asked Senior Advocate Rizwan Merchant, who represented the Mumbai police.

"If anybody does not fall within the line of the government, will that be sedition?", Justice Shinde further asked.

The judge also told the Public Prosecutor Deepak Thakare that proper workshops should be given to police officers regarding the sections to be invoked in FIRs.

The bench is passing the order. Records that Kangana and Rangoli will appear before Bandra Police SHO on January 8, 2021, between 12 PM - 2PM.#KanganaRanaut#BombayHighCourt

The bench also expressed unhappiness over the fact that Kangana and Rangoli failed to comply with the three summonses served on them.

Advocate Siddiquee submitted that they could not appear as they were out of Maharashtra in connection with a wedding function and added that they have sent their responses to the investigating officer.

Not satisfied with this submission, Justice Shinde remarked: "When a summons is issued, what is the procedure? You sent the answers by post? Is that the procedure? Whatever, you have to honour the summons".

The bench said that it will grant interim protection from coercive action but the petitioners should appear for interrogation.

Senior Advocate Merchant submitted that they should be asked to appear ASAP if they are to be given interim protection.

"What is so special about them that they can come only in January?", Merchant submitted.

The bench ultimately proceeded to grant the interim order subject to the condition that the petitioners should make themselves available for questioning before the Bandra Police on January 8.

The court posted the matter next on January 11.

In October, Bandra Metropolitan Magistrate Jaydeo Ghule ordered an FIR to be registered after finding a prima facie case against the actor and her sister. The complaint was filed by one Munawar Ali Sayyed, a casting director in the Hindi Film Industry who sought FIR to be registered for offences punishable under Sections 153 A, 295 A, 124 A r/w 34 of IPC.

The complainant alleged that by her tweets Kangana was creating divisions between Hindus and Muslims.

"I say that the accused no.1 is maliciously bringing religion in almost all her tweets", he alleged.

Thereafter, the complaint cited instances wherein Kangana and Rangoli's tweets were allegedly communal. Her tweets on lynching of Hindu Sadhus at Palghar, calling the BMC "Babur Sena" after her office was demolished, claiming that she is the first person to make a movie on Chhatrapati Shivaji Maharaj and Rani Laxmi bai of Jhansi in a "Islam dominated industry", blaming Jamaatis for spreading Corona virus etc are cited by the complainant alleging that Kanagana tried to create hatred and communal tensions between Hindus and Muslims deliberately.

After going through the complaint and the tweets posted by the accused, Magistrate Dhule observed-

"Perused the complaint, heard the advocate of the complainant along with the documents filed on record. On prima facie perusal of complaint and submission I have found cognizable offence has been committed by the accused. Total allegations are based upon comment on electronic media that is twitter and interviews. The accused used social media like twitter and thorough investigation is necessary by the expert. The all offences alleged and levelled against the accused are cognizable. Search and seizure is necessary in this case, in such circumstances I have found it to be proper to pass order under Section 156(3) of CrPC."

On October 29, Magistrate Court at Andheri ordered inquiry against actor Kangana Ranaut and her sister Rangoli Chandel for allegedly posting derogatory tweets against the Muslim community. Court ordered an inquiry under Section 202 of CrPC and called for a police report on the allegations against the siblings. Apart from this, a Court in Karnataka ordered an FIR to be registered against the actor for her tweets on protests by farmers against the farm bill