"Today Is The 'Test Night', Ensure No One Dies Due To Lack Of Oxygen As It Is Violation Of Article 21": Bombay High Court To Goa Govt 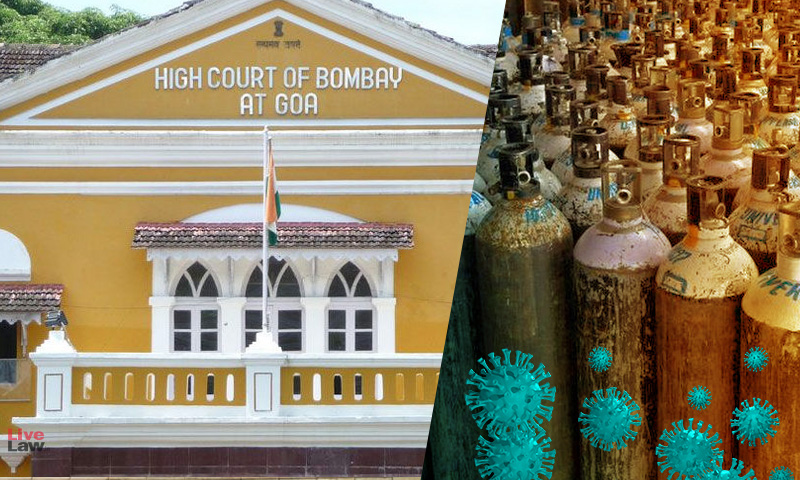 Stressing that if a COVID positive patient dies due to the lack of Oxygen, it is an infringement of the right to life under Article 21, the Bombay High Court (Goa Bench) today observed that it is every state's responsibility to protect the lives of its citizens.Bench: We don't want that any newspaper reports tomorrow that these many people died yesterday. Let us focus on today's night...

Stressing that if a COVID positive patient dies due to the lack of Oxygen, it is an infringement of the right to life under Article 21, the Bombay High Court (Goa Bench) today observed that it is every state's responsibility to protect the lives of its citizens.

Bench: We don't want that any newspaper reports tomorrow that these many people died yesterday. Let us focus on today's night and ensure that no one dies.#COVIDManagement#Goa#BombayHighCourt#Oxygen

Noting that patients are indeed suffering and even in some cases succumbing for want of the supply of oxygen, in the State of Goa, the Bench of Justice M. S. Sonak & Justice N. W. Sambre specifically remarked,

"The Constitution says that no lives should be lost, if deaths occur due to want of oxygen, then it is a clear case of violating the fundamental right to life, and it is not acceptable."

Bench: No one is being blamed, but we now know that deaths have occurred due to the non-supply of Oxygen. Let us not live in a state of denial.
Bench praises medical professionals: They are living by Hippocratic Oath. Have done a lot for the State.#COVIDManagement#Goa
— Live Law (@LiveLawIndia) May 12, 2021

The Court also observed that the situation about the supply of oxygen at the Goa Medical College is quite grim and that we have long passed the stage of determining whether patients are suffering from the lack of oxygen or not.

"(There exists) a corresponding duty cast on the State to ensure that this life is not extinguished on account of inability on the part of the State to supply oxygen to these unfortunate victims of the pandemic. This duty can neither be avoided by pleading helplessness nor by putting forth logistical difficulties in sourcing and supplying oxygen."

Bench: We are a constitutional court, Article 21 is about the Right To Life, and Supreme Court has interpreted the Article to the extent that it is every state's responsibility to protect the lives of the citizens.#COVIDManagement#Goa#BombayHighCourt#Oxygen

All the Officials presented before the Court, explained about that the issues involved in the supply of oxygen, particularly, at Goa Medical College.

In view of oxygen crises being faced by the GMC, the Court said that the State will have to take all necessary steps to ensure that such logistical difficulties are overcome at the earliest and that there are no casualties for want of a supply of oxygen to the pandemic victims.

Posting the matter for tomorrow, the Court expressed hope that at least tonight, and even hereafter, with the joint efforts of the Dean and the State Administration of which he is a part, there are no casualties at the Goa Medical College for want of oxygen.

Further, accepting the conditions proposed by the learned Advocate General and directing the authorities to comply with such conditions, the Court waived the requirement of Covid negative certificate to two drivers and one helper per goods vehicle until further orders.

Bench: Doctors working day and night, now police will also have to work day and night on the state borders, we are also working day night. We are only considering how the system should be revived, some introspection necessary as to how we reached here.

However, the Court made it clear that at each of the borders, the police or the other authorities will have to scan such persons with the thermal guns to see whether they display any symptoms.

"If they display the symptoms, then, the police authorities or the other authorities should deny access to such persons within the State of Goa", added the Court.

Lastly, underlining that the limited waiver is not to be construed as a general license for permitting any persons to enter into the State of Goa, without having the Covid negative certificate, the Court said,

"We clarify that we have not ordered the sealing of Goa borders but having regard to the unfortunate fact that Goa is one of the worst affected State, we have only directed that a covid negative certificate be insisted from persons entering into Goa."

Bench: We waive the requirement of the #COVID negative certificate for good vehicle's 2 drivers and 1 helper, but they will have to be scanned by thermal guns.
But this shouldn't be treated as a general license for any person to enter Goa without a negative certificate
— Live Law (@LiveLawIndia) May 12, 2021

Therefore, all concerned were directed to realize that there is no unnecessary insistence of waiver in the name of protecting the interests of the economy.

"No doubt, the importance of the economy can never be undermined, but at this stage at least, the priority and emphasis shall have to be on issues of health and survival. Ultimately, the economy is for the people and not the other way round. Once the position improves, obviously the focus can and perhaps will have to shift on the economy, which the Learned AG points out is so vital," concluded the Court.