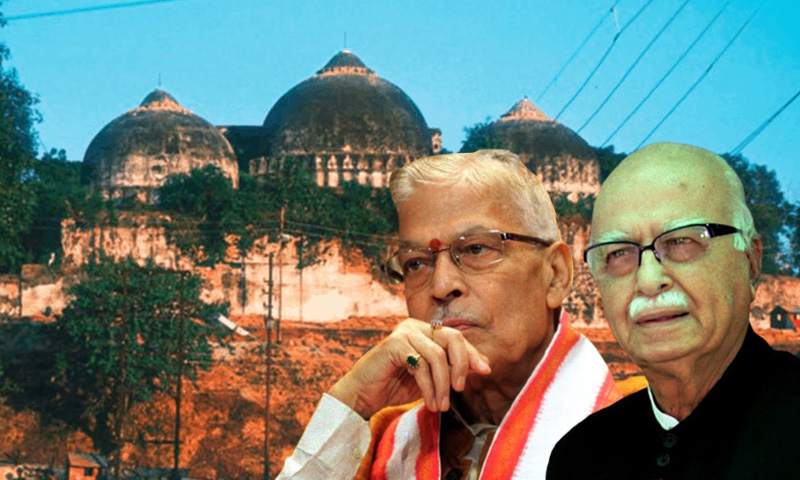 A Special CBI Court at Lucknow on Wednesday acquitted all 32 persons accused of hatching the criminal conspiracy behind the demolition of the Babri Masjid mosque on December 6, 1992.The acquitted persons include prominent BJP leaders L K Advani, Murli Manohar Joshi, Uma Bharati, Kalyan Singh etc.Special CBI Judge S K Yadav, in his 2000-page verdict, held that the demolition of the mosque was...

A Special CBI Court at Lucknow on Wednesday acquitted all 32 persons accused of hatching the criminal conspiracy behind the demolition of the Babri Masjid mosque on December 6, 1992.

Special CBI Judge S K Yadav, in his 2000-page verdict, held that the demolition of the mosque was not premeditated and that there was no criminal conspiracy behind it.

The Court said that the demolition was not pre-planned and that the accused had actually tried to stop the mob and not incite them.

"Those who climbed on the dome, they are anti-social elements", the Court stated.

The authenticity of the audio and video clips produced by the CBI is not proved, the court held.

Further details of the verdict are awaited.

26 out of the 32 accused persons were physically present in the court today. Six accused persons including Advani, i, Murli Manohar Joshi, Uma Bharati, Kalyan Singh appeaered via video conferencing. Uma Bharati had tested positive for COVID-19 few days ago.

The Babri Masjid in Ayodhya was demolished in December 1992 by Hindu Kar Sevaks who claimed that the land on which the mosque was built was the birth place of Hindu deity Ram.

The Supreme Court had extended the deadline for the trial court to complete the trial several times, with the last extension given on August 19, 2020.

On April 19, 2017, the Supreme Court Bench of Justices P C Ghose and R F Nariman had restored the conspiracy charges against the accused by allowing an appeal filed by the CBI against the discharge given by the Allahabad High Court to them.

The top court had further ordered day-to-day trial to be concluded in two years in the case.

On July 19, 2019, a bench headed by Justice R F Nariman had directed the Trial Court to complete the recording of evidence within six months and deliver judgment within nine months. The Court had also directed the UP Government to issue administrative orders to extend the tenure of the Special Judge of CBI Court, Lucknow till the delivery of judgment. The judge was otherwise due to retire on September 30, 2019.

Later, on May 8, 2020, a Supreme Court Bench comprising of Justices Nariman and Surya Kant had extended the deadline for Special CBI Court, Lucknow to deliver its judgment in the case by August 31, 2020 after considering a request for extension made by the Special Judge.

On July 24 this year, the Trial Court recorded the statement of Advani via video conferencing.

Pleading innocence, the 92-year old former Deputy Prime Minister denied his involvement in the alleged conspiracy along with 'Kar sevaks' to demolish the disputed structure in Ayodhya on December 6, 1992. He pleaded he was completely innocent and was unnecessarily dragged in the case owing to political reasons.

The civil case pertaining to Ayodhya-Babri Masjid dispute attained finality on November 8, 2019, when a 5-judge bench directed that the entire disputed land of 2.77 acres in Ayodhya must be handed over for the construction of Ram Mandir.

The Top Court had held that an alternate plot of 5 acres must be allotted to the Sunni Waqf Board for the construction of a mosque. This direction was passed invoking powers under Article 142 of the Constitution.

The Court had then observed that the destruction of Babri Masjid in 1992 was a violation of law. The act of placing idols beneath the central dome of the mosque in 1949 was an act of "desecration", observed the Constitution Bench comprising of then CJI Ranjan Gogoi along with Justices S A Bobde, D Y Chandrachud, Ashok Bhushan and Abdul Nazeer.