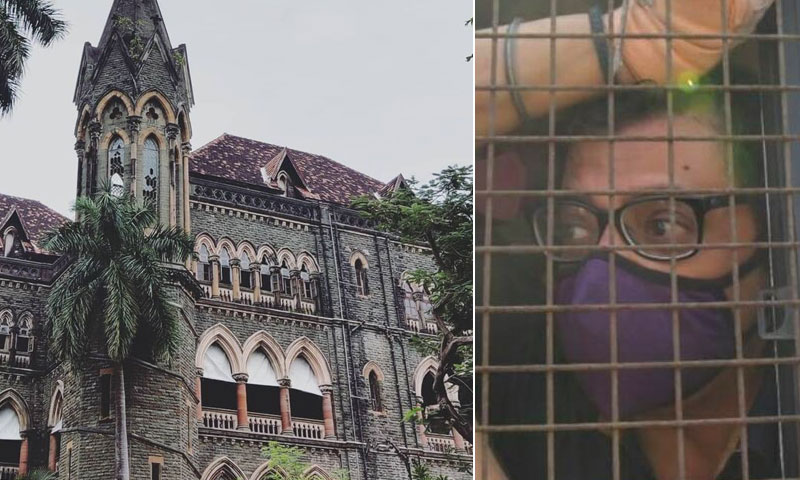 The Bombay High Court on Friday refused to grant interim relief to allow the release of Arnab Goswami, Editor-in-Chief of Republic TV, who has been remanded to 14-days judicial custody till November 18 in a 2018 abetment to suicide case."Can't pass interim order without hearing Complainant and State", observed a bench comprising Justices S S Shinde and M S Karnik while posting the habeas...

The Bombay High Court on Friday refused to grant interim relief to allow the release of Arnab Goswami, Editor-in-Chief of Republic TV, who has been remanded to 14-days judicial custody till November 18 in a 2018 abetment to suicide case.

The bench has issued notice on the petition to the State and also to the complainant Adnya Naik(daughter of Anvay Naik who killed himself in 2018). The bench said that it will hear both sides and pass appropriate orders on the interim relief tomorrow.

The bench also posted tomorrow a petition filed by Adnya Naik seeking re-investigation of the "A" summary filed in connection with the FIR of her father's suicide case, in which Arnab Goswami was arrested.

Seeking interim relief for Goswami, Senior Advocate Abad Ponda submitted before the Court that the investigation is completely illegal and Goswami should be granted ad-interim relief.

"Commencement of new investigation after re-opening the case is contrary to well-settled principles of criminal law," he submitted.

He pointed out that the 'A' summary filed by the Police in 2019 in the abetment to suicide case was accepted by the Magistrate and that remains in order. However, without any judicial order, "the police suo moto intervened in the matter, for obvious reasons that are taking place in Maharashtra," which he said he did not want to say in open court.

He insisted that 'A Summary' is like a nail in the coffin, which has to be removed through appropriate order. He submitted,

"Proposition of law is this- without altering the closure report, and without an order of further investigate, the police cannot resurrect a dead case.

The manner in which this is done is completely shocking to a prudent man. The investigation could not have taken place when the 'A Summary' is on record."

However, Justice Shinde made it clear that the Bench will not pass any interim order without hearing the respondents.

"The respondents are entitled to prior notice… We will have to issue notice to the State, to the complainant and we will hear the case on some other date after vacations," the Court said.

At this juncture, Ponda urged the Court to intervene in the matter as a citizen has been detained illegally. He said,

"Even a second's illegal detention cannot be countenanced by a constitutional court. I should be given an ad-interim order of release.

If I can prima facie satisfy this court, the ends of justice require that I should be released on interim bail. The Constitutional court must come to the rescue of a citizen who has been treated unfairly."

However, Justice Shinde observed that the Petitioner has are other remedies and he may challenge the remand order.

Senior Advocate Harish Salve, also appearing for Goswami, sought the Court's permission to interrupt and submitted that the in question involves the liberty of a citizen. He said,

"He (Goswami) is a journalist. Will heavens fall if he is given interim release? I don't understand, with due respect.

Please release this man as an ad-interim measure and hear the case in detail later," Salve urged.

However, Justice Shinde remained unconvinced to pass an ad-interim relief and said that he will give reasons for the same.

Resuming his submissions, Ponda asked the Court if the police can review an order closing the case, passed by the Magistrate?

"The complainant has not filed any protest petition… A party cannot consider an order as invalid. A judicial order, even if void or voidable, remains valid until it is set aside by a superior forum. So the closure order remains," he said.

"The complainants now seek re-investigation. By their own admission, they also realize that the closure order needs to be set aside."

Significantly, the Court had also agreed to hear a petition filed by Adnya Naik seeking re-investigation of the "A" summary filed in connection with the FIR of her father's suicide case, in which Arnab Goswami has been arrested.

He referred to the decision in Bhagwat Singh v. Commissioner Of Police & Anr, decided on 25 April, 1985, which he termed the "Bible of the Case" on the point of further investigation.

He also referred to the Supreme Court's decision in Vinubhai Haribhai Malaviya v. State of Gujarat, whereby it was held that a Magistrate has power to order further investigation into an offence, even at a post cognizance stage, until the trial commences.

As per "Vinubhai Haribhai Malaviya vs. State of Gujarat" judgment, nod of Magistrate is needed for further investigation. A "seen and filed" endorsement is not enough," he argued.

Justice Shinde says the bench will not pass any interim order without hearing the respondents. The respondents are entitled to prior notice, the judge says.#RepublicTV #ArnabGoswami #BombayHighCourt

The Republic TV editor was arrested by Raigad police yesterday morning from his Mumbai residence in an FIR registered in 2018 in relation to the suicide of Anvay Naik, an interior designer. A court at Ailbag remanded him to 14-days judicial custody till November 18.

It is alleged that Anvay Naik left a suicide note written in English stating that he and his mother decided to take the extreme step on account of payments due to them not being cleared by the owners of three companies – television journalist Arnab Goswami of Republic TV, Feroz Shaikh of IcastX/Skimedia and Niteish Sarda of Smartworks.

Naik said in his suicide note that his company had executed interior works for Republic TV and an amount of Rs 83 lakh was due from Goswami and ARG Outlier Meida Pvt Ltd (parent company of Republic TV).

The Raigad police had closed the case in April 2019 saying that they did not find evidence against the accused named in the suicide note, including Goswami.

However, in May this year, Anvay's daughter approached the Maharashtra Home Minister Anil Deshmukh seeking the case be reopened.

Maharashtra Home Minister Anil Deshmukh had tweeted in May, "Adnya Naik had complained to me that Alibaug Police had not investigated non-payment of dues from Arnab Goswami's Republic which drove her entrepreneur father and grandma to suicide in May 2018. I've ordered a CID re-investigation of the case."