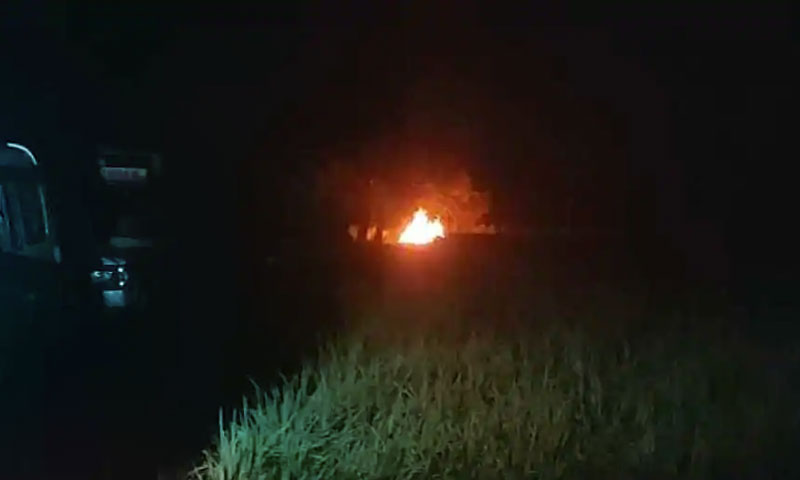 The family of the victim in the Hathras case has moved a habeas corpus petition in the Allahabad High Court against alleged illegal detention by the UP Government. The writ petition has been moved by the Akhil Bharatiya Valmiki Mahapanchayat on behalf of the detained family, through Advocates Kashif Abbas Rizvi and Joun Abbas. The matter was listed before the Bench of Justices...

The family of the victim in the Hathras case has moved a habeas corpus petition in the Allahabad High Court against alleged illegal detention by the UP Government.

The writ petition has been moved by the Akhil Bharatiya Valmiki Mahapanchayat on behalf of the detained family, through Advocates Kashif Abbas Rizvi and Joun Abbas.

The matter was listed before the Bench of Justices Pritinker Diwaker and Prakash Padia and verdict has been reserved thereof.

It is alleged that the immediate family of the deceased victim, i.e. her father, mother, two brothers, sister-in-law and grandmother have been illegally detained in their own homes by the UP Government.

"Ever since the information and horror of this distressing event has spread across India, the administration has been making all attempts to threaten, pressurize, and intimidate the Petitioners into making false statements which may enable the widespread discontent to die down, and the perpetrators of the crime to go scot free.

As part of this scheme, the administration had installed blockades in and around Hathras District, and persons who seek to travel to the area are being prohibited to do so without any lawful reason, and being prevented from doing so by use of illegal force and measures," the plea states while asserting that the Government has violated their Fundamental Right to free movement.

The plea further discloses that the family has been "gheraoed" at its own home since September 14, i.e. the date of the incident and only her brother was allowed to accompany her at the Hospital in Agra. Further, it is submitted that only on September 28, when she was being moved to Delhi, did the Government allow two more members of the family to visit her.

It is also alleged that the family was not given custody of the victim's corpse and they remained "forcefully confined" in their homestead land and continue to remain as such.

Further it is submitted that the family has been prevented from even meeting or communicating freely, thereby violating their Fundamental Right to freedom of speech and expression as well as the right to receive information under Article 19(1)(a) of the Constitution.

The impugned actions are also alleged to be a violation of their rights under the Scheduled Castes and Scheduled Tribes (Prevention of Atrocities) Act, 1989.

It may be noted that since the Petitioners are allegedly under detention, the Affidavit has been sworn by the National General Secretary of the Akhil Bharatiya Valmiki Mahapanchayat, who claims to have received instructions from the family over telephone, via Whatsapp.

The 19-yr-old victim in this case was allegedly tortured and gang raped by four men on September 14 in UP's Hathras district. It is alleged that the perpetrators cut of the tongue of the victim to ensure that she does not give any statement to the police and repeatedly threatened her family for several days.

She was recovered from the fields in a critical condition and was admitted to a hospital in Aligarh for treatment. On September 28, she was shifted to AIIMS Delhi, where she succumbed to her injuries the next day.

Allegedly, the victim's family was not even allowed to cremate her body but was instead, locked up in their home during cremation in the wee hours on September 29.

The Allahabad High Court has taken suo moto cognizance of the matter and has decided to examine whether the economic and social status of the deceased's family was taken advantage of by the State Authorities to oppress and deprive them of their Constitutional rights?

"The rights of individual citizens in the Country and the State especially that of the poor and the downtrodden such as the family members of the deceased victim and the deceased herself are paramount and the Courts of Law are under a bounden duty to see that the said rights available under the Constitution are protected at all costs and the State does not in its misplaced endeavour for political or administrative reasons transgress the limits of its powers to encroach and violate such rights, especially in the case of poor and the weak," the Court said.

A PIL is also pending before the Supreme Court seeking SIT/ CBI investigation in the matter.

Inter alia, a number of letter petitions have been filed at both the Courts, seeking impartial investigation, expeditious trail and justice in the matter.